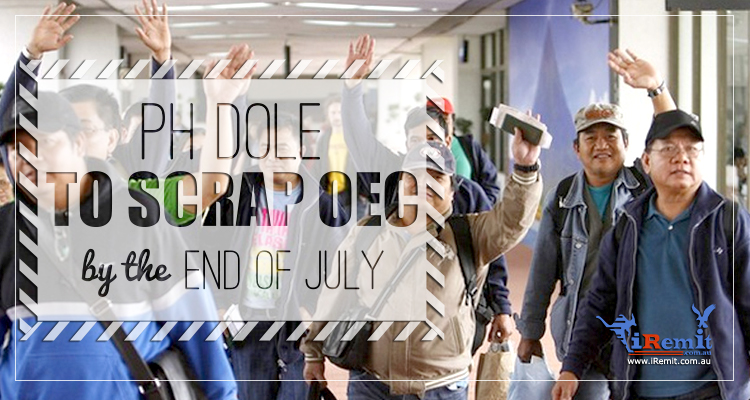 Philippine DOLE to Scrap OEC by the End of July

Should the implementation of the Department of Labor and Employment’s (DOLE) newest program go smoothly this month, you will no longer need to secure an Overseas Employment Certificate (OEC) each time you get deployed abroad.

In an interview with the Presidential Communications Office Assistant Secretary this past Monday, Labor Secretary Silvestre Bello III announced that the government would be rolling out an OFW ID to replace the prior OEC requirement for migrant workers.

The announcement was enthusiastically received by many OFW’s, as obtaining an OEC from the Philippine Overseas Employment Administration (POEA) prior to every deployment is both expensive and time-consuming.

Several migrant workers have even come to view the document as useful for nothing more than generating additional revenues for the government.

Under the new ID system, all “bona fide” Filipino migrant workers about to get deployed need only show their identification card, which they are to receive from POEA, free of charge. As a major component of the Integrated Dole system (iDole) program, the ID card is also intended to be used for all government transactions. It can also supposedly be used as a debit card for OFW banks and as a beep card for the Light Rail Transit (LRT) and Metro Rail Transit (MRT)  stations.

DOLE is scheduled to officially launch the special OFW ID by mid-July, and aims to completely abolish the need for acquiring an OEC by the end of the month.

In the meantime, Bello mentioned that his agency is also mulling over a motion to enable the use of the said OFW ID as a passport. The future of this proposal, which would require extensive talks with stakeholders like the Department of Foreign Affairs and the Bureau of Immigration, is yet to be determined, but it is certainly an auspicious beginning for the current administration’s relationship with OFW’s.