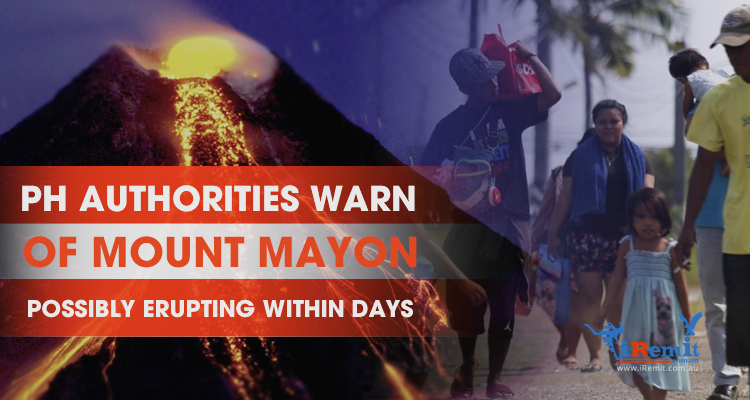 Despite its near-perfect cone shape and mostly serene appearance, Mt. Mayon has had a long history of deadly eruptions.

And now, it looks like the Philippines’ most active volcano is set to add another one to the list.

Last Saturday, January 13, 2018, Albay’s famed volcano began to spew ash. A five-minute eruption occurred the following morning, and a faint glow around the crater was observed shortly afterwards. The Philippine Society for Volcanology and Seismology (PHILVOCS) thus raised Alert Level 3 over the volcano and provincial disaster officials ordered the evacuation of initially 3,000 people residing at the foot of Mt. Mayon.

“Mayon’s summit crater is now exhibiting bright crater glow that signifies the growth of a new lava dome and beginnings of a lava flow towards the southern slopes,” PHILVOCS declared. “Mayon is exhibiting relatively high unrest and a hazardous eruption is possible within weeks or days.”

The last time lava flowed out from Mt. Mayon back in 2014, an estimated 63,000 people were forced to flee their homes. Prior to that, four foreign tourists and a local tour guide were killed during an eruption on May 2013.

PHILVOCS Director Renato Solidum claimed that these past eruptions were preceded by volcanic activities similar to what is going on now. Furthermore, he stated that they’ve observed the lava to be more fluid now than it was back in 2014. This means its flow can descend further down the slopes at a faster rate.

How things will unfold in the next few days is vital, and it’s highly possible that the Alert Level could be raised to 4 as the risk of a hazardous eruption increases over time. While there’s a chance that the resulting eruption might be non-explosive, with lava simply oozing from the crater rather than exploding into the air, officials have advised residents to remain highly vigilant towards other present dangers.

For one, the fine ash in the air could cause respiratory problems when inhaled, while those on the roads could render them slippery. Civil aviation authorities have also been told to warn pilots about flying close to the volcano’s summit, lest its ash end up in hot jet engines and end up stalling them.

As of press time, a total of 12,000 have fled the Permanent Danger Zone within a four-mile radius of the volcano. PHILVOCS predicts that ash fall events are likely to affect communities on the western and southwestern side of the crater due to the wind pattern. Individuals settled on the periphery of the volcano were also told to keep their noses and mouths covered with damp, clean cloths or dust masks to prevent smoke and ash inhalation.