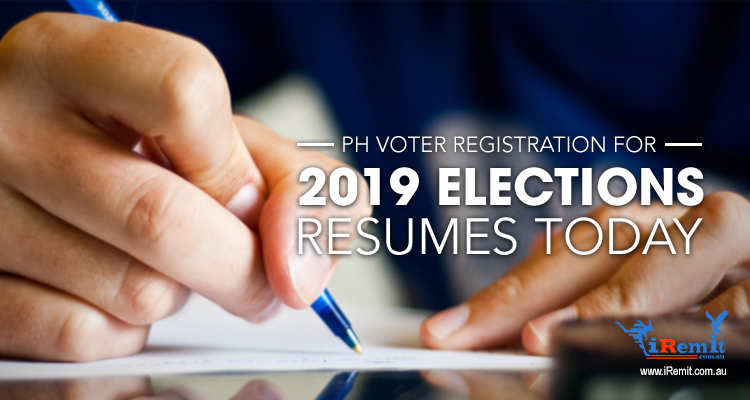 The last Philippine Presidential elections were so intense (I bet some friendships still haven’t recovered from it) that it’s quite astounding to realize that the mid-term elections are nearly upon us. Has it really been nearly three years since one of the Philippines’ most polarizing characters won the presidency?

As though to drive the point further, the Philippine Commission on Elections (COMELEC) will be resuming voter registrations today, 2 July 2018, in the lead-up to next year’s elections. This is in line with Comelec Resolution No. 10392, which was released last Tuesday, 29 June.

COMELEC Spokesperson James Jimenez has announced that the city, district, and municipality offices of election officers (OEO’s) will be open from 8 AM to 5 PM from Mondays to Saturdays to assist registrants. The OEO’s will also continue to operate as such, even on holidays, from 2 July to 29 September of this year. Applications for any of the following processes will be accepted at the said offices during the said period:

Field officials will also be conducting satellite registrations during this period, and they will be visiting villages or barangays, public plazas, schools, and other similar places in order to register the voters from remote areas. Instructions have been issued regarding the prioritization of those hailing from the more vulnerable sectors, such as indigenous peoples, pregnant women, and the elderly.

Marawi City, however, is off the list. “It is the mandate of the Commission to conduct regular registration in order to enfranchise those lost qualified voters nationwide, with the exception of Marawi City, Lanao del Sur, in light of the current situation in the area,” Jimenez added in his previous statement.

We highly urge all our Filipino readers to register and vote. Regardless of which end of the political spectrum you’re leaning towards, being able to participate in the democratic process should be treated as a hard-won right and a responsibility. Registering properly is the first step towards abiding by that.