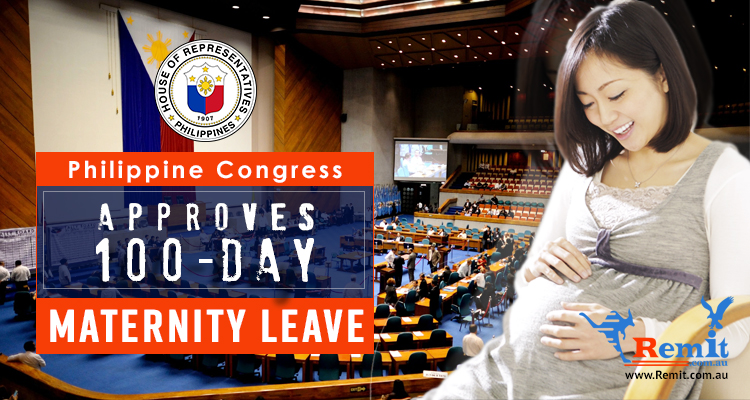 As of 4 September 2018, the Philippine House of Representatives unanimously approved a bill granting an additional 40 days to the existing 60-day maternity leave for female workers in both the private and government sector. The lawmakers voted 191-0-0 in favor of House Bill (HB) No. 4113 or the proposed 100-Day Maternity Leave Law on its third and final reading, just one week after the second reading was approved.

HB 4113 grants 100 days of paid maternity leave to all pregnant female workers regardless of their civil status, chosen mode of birth, and the legitimacy of their child. Under the said bill, the maternity leave benefits shall also be granted in every instance of pregnancy or miscarriage, regardless of frequency, as compared to the existing law, which limits the application of the said benefits to four (4) pregnancies total.

The other benefits put forth by the new bill also include:

Before President Rodrigo Duterte can sign the new maternity benefits into law, however, the bill needs to pass through the bicameral conference committee comprised of members of both the House of Representatives and the Senate. This is so that the legislators can reconcile the conflicting provisions of the Upper and Lower House’s versions of the bill.

While both HB 4113 and the Expanded Maternity Leave Bill (Senate Bill 1305) impose no limits on the frequency with which their respective benefits can be invoked and allow for a further 30-day extension with no pay, there are a few significant differences.

So far, however, the bill’s progress through the legislature has been lauded across the board. Gabriela Representative Arlene Brosas hailed its passage as “a recognition of the productive role that women play in the economy and their right to maternal health stipulated in the Constitution.” In addition to this, Akbayan Representative Tom Villarin referred to HB 4113’s unanimous approval as “a victory for women workers.”

Given the expediency with which the bill is making its way through the legislative branch, it won’t be long before the female half of this country’s workforce will be honored further for what is often acknowledged to be their greatest natural asset: the ability to give life to another human being.