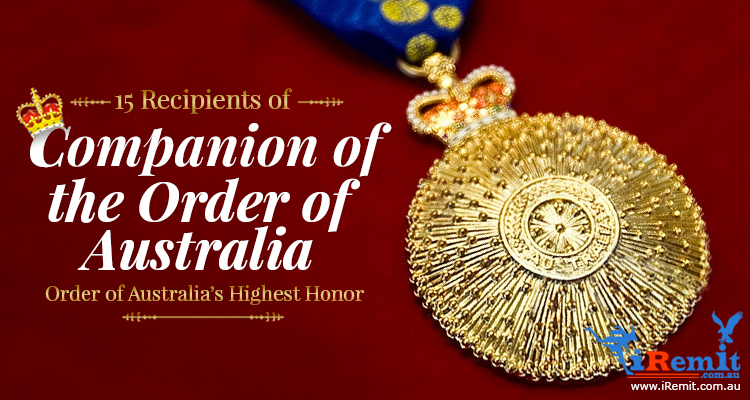 Order of Australia: 15 Highly Esteemed Individuals Awarded Australia’s Highest Distinction And Why You Should Know Them

The Order of Australia is an order of chivalry institutionalized by Queen Elizabeth II to grant certain individuals accolade for their contributions to society. With the announcement on the Queen’s Birthday, 891 Awards for the Order were conferred. Fifteen admirable awardees were bestowed the highest honor, the “Companion of the Order of Australia (AC)”.

Imagine a royal ceremony bequeathing the highest distinction a citizen can have. For this year (2017), the awardees for Companion (AC) are as follows:

You might recognize her as the celestial Galadriel in the Lord of the Rings, or the evil stepmother in Cinderella (2015). But one can’t clearly pinpoint the most notable role this highly esteemed actress depicted.

With this spectrum of award-winning portrayals, Cate deserves this title, hands down.

With his medical research in structural biology and medicinal chemistry, Professor Peter Colman was also awarded this prestigious honor.

He spearheaded the discovery of the anti-influenza drug, Relenza. This drug is for prevention and cure of the current strains of this virus. He contributed to the normalization of the once fatal influenza virus to manageable levels today.

Image Credit: Department of the Premier and Cabinet

Another esteemed recipient is Professor Peter Linken. In the field of medical research and biochemistry, he discovered crucial characteristics of red blood cell formation and leukemic cell adaptable functions. This revelation became the basis for numerous studies thereafter. To top it off, he studied the genetic origin of numerous oncological diseases to help understand its nature; possibly decreasing the chance of acquiring cancer in the future.

Professor John Shine is an Australian biochemist that discovered the Shine-Dalgarno Sequence. The cornerstone study paved the way for the advancement in molecular biology and genetic engineering. It is a key discovery in the initiation and termination of protein synthesis. He also cloned the renin and endorphin gene in bacteria to show its expression in biological active form. This feat garnered him numerous accolades worthy of being part of the order (AC).

Professor Kenneth Freeman is one of the most influential authorities for Galactic Archaeology. Basically, it is a type of Archaeology that aims to understand the history of the universe with data observable in Earth. He theorized the abundance of dark matter in spiral galaxies, a major stepping-stone in understanding the continuous expansion or recollapse of the universe.

And as a leader in the field, he mentored 54 PhDs and, of those mentored, produced brilliant award winning students in similar fields. Certainly, he is a man that amplified his legacy for the upcoming generations.

For excellence in public governance, Mr. Robert Doyle was also awarded the highest acclaim. He transformed the city of Melbourne into a “night time city” extending operational hours of establishments and public transportation.

Ultimately, increasing revenue and curtailing crime rates. He also showed resolve against China with the Uighur Film Incident, displaying that this ironclad leader can’t be pressured by even a super power. By being a visionary, Sir Robert Doyle surely deserves this distinction.

Mr. Julian McMahon is a prominent Australian barrister known for his strong opposition to death penalty. He represented countless people (on pro bono) against this capital punishment including the high-profile case of Andrew Chan and Myuran Sukumuran of Bali 9. Mr. McMahon believes in the transformation of people under penance and pushed clemency for his clients.

But to no avail, the verdict still pushed thru. Internationally, the duo was sentenced to death by a firing squad after their capture for drug trafficking.

Rest assured, his valiant efforts are not for naught. He ignited awareness in this social problem. And influenced a number of countries to push for human rights and social justice reform. By this feat alone, Mr. Julian is truly worthy to be a companion (AC).

Professor Ross Garnaut is an Economist famous for his research on climate change and its economic implications. With the updated Garnaut Climate Change Review, it showed the scientific eventuality, beyond reasonable doubt, that global warming is happening.

It led to the pledge of countries, representing 90% of the carbon emissions in the world, to target temperature increase to a low of 2 degrees Celsius. It induced the shift of Australia and most countries to renewable sources. He articulated that the push to this earth-friendly sources will drive more revenue in the long run.

The influence of his research spoke to the consciousness of our world leaders. And it definitely contributed to the preservation of the world we are living in today.

With his expertise in Philosophy, Professor Philip Pettit received the highest distinction in Australia. His discourse regarding moral and political theory is embodied by his books (to name a few) Republicanism: A Theory of Freedom and Government (1997) and Just Freedom: a moral compass of the complex world (2014) shed light on our modern world and its social structure.

These ideas paved way to a new perspective and solutions to moral and political philosophy. This leader of public debate absolutely deserves to be on this list.

Currently the Vice Chancellor and President of Griffith University, Professor David Ian O’Connor earned the Companion of the Order with his services to the Academe. Professor O’Connor is known in the field of Juvenile Justice Research. He published Social Work and Welfare Practice (2003) and Contemporary Perspectives on Social Work and the Human Services: Challenges and Change (2000).

He is also the Chair of the Ministerial Advisory Committee for the implementation of the recommendations of The Forde Inquiry, an inquiry (1998-1999) by Leenen Forde AC about the extent of child abuse in Queensland. With his contributions to social policy and child welfare, Professor O’Connor deserves to be heralded this laurel.

Mr. Michael Jenkins Crouch is most known for the acquisition of the Australian Company Zip, a manufacturing firm of bathroom and kitchen heaters.  His company introduced the first small boiling water heater. It led them from being a small company to a major exporter to almost 70 countries around the world.

After stepping down from Zip’s board, he is now the chairman of the flourishing Midgeon Holdings Pty Ltd., a holding company with investments in Australian Manufacturing Firms, Australian Bred Beef, and Meat Processing.

Aside from his business feats, he was also given this prestige for his philanthropic contributions to numerous cultural, educational, medical, and business entities. Mr. Crouch was the Principal Sponsor for Sydney Festival (2011, 2012, 2013), Principal Sponsor for Duke of Edinburgh’s Award for the youth, a leading supporter of Symphony of Australia Pty Ltd for cultural preservation.

He even produced a 100-page book entitled “The First Musical History of Our Nation”. And donated 2000 copies to innumerable libraries across Australia. These are just some of his contributions. Worthy is an understatement for his accomplishments.

If you are a wine enthusiast, Mr. Peter Gago’s concoction is absolutely under your cellar’s wish list. He is the Chief Winemaker of Penfolds Wine since 2002, and a proponent of Australia’s esteemed Penfolds Grange with vintage ones valued as much as $50,000 AUD.

The label was awarded a perfect score by top American wine reviewers, Wine Spectator and Wine Advocate. And the only wine listed in the South Australian National Trust’s items of movable heritage. As an esteemed oenologist, and being one of the best in the world, this wine expert clearly deserves the accolade.

When opportunity meets preparation, luck struck down the hands of Mr. Aaron Jonna “John” Gandel.  Started with his parents’ clothing business, Sir John is well versed in business. Upon control of the enterprise, alongside his brother-in-law, they grew the once small-scale shop to more than 200 stores across Australia.

But the real gold mine he acquired is in real estate. Currently sitting in number 7 as Forbes Richest in Australia ($3.2B net worth), Sir John made his billions on shopping malls, Chadstone Shopping Centre and Northland Shopping Centre among others.

But the true weight of his accomplishments is embodied in

Some organizations they support are

FareShare, Monas Health Translation Precinct, Royal District Nursing Service, and Light House Foundation. The support for this organization certainly alleviates cancerous societal problems.  His heart for the needy coupled by his business prowess, without a doubt, warrants him the “AC” beside his name.

If you have flown using Qantas or Jetstar, you might be giddy to meet the man behind its successful operations. Mr. Alan Joseph Joyce, the CEO of Qantas airline, was also given the honor to be a Companion of the order (AC). One of the most influential business leaders (The Australian, 2011), Qantas became arguably the best airline in Australia under his leadership. Also, you can’t overlook his contributions to tourism.

video showed just a snippet of his witty tenure.

He sits as an Ambassador for the Australian Indigenous Education Foundation. The organization gives out scholarships to deserving individuals. But the greatest advocacy of this leader is for Gender Equality. Being openly gay, Mr. Alan pushes gender equality within the culturally diverse Land Down Under.

pie man fiasco, Mr. Joyce is fervent more than ever to reach the parity each one deserves. Such resolve affirms his inclusion in this list.

Known for his leadership in Ford (1996 – 1999), Mr. Jacques Nasser was endowed the highest honor for his contributions in the International Mining and Manufacturing sectors. He was attributed Ford’s turn around surpassing General Motors back in October 1996. Today, he sits as the chairman of the multinational mining company BHP Billiton, and as a director of both 21st Century Fox and Turkish Conglomerate KoC Holdings.

Mr. Jacques Nasser is not new to aristocratic merits. He was given the Ellis Island Medal of Honor, an American award that recognizes contributions by American immigrants, with recipients ranging from Presidents to Nobel Prize awardees. Also, under his badges lie the title “National Order of the Cedar”, Lebanon’s highest honor.

Moreover, he is a benefactor for

Focus: Hope, a Detroit-based firm that aims to alleviate racism, poverty, and injustice. This powerful but compassionate director unequivocally deserves to be named as a companion (AC).

This prestigious list is truly a marvel to know. This shows no excuse as to the extent of what a persevering individual can achieve and give back to society. But regardless of being recognized, I hope this inspire us to contribute to society and to the future generations to come. You’ll never know; you might be the next!