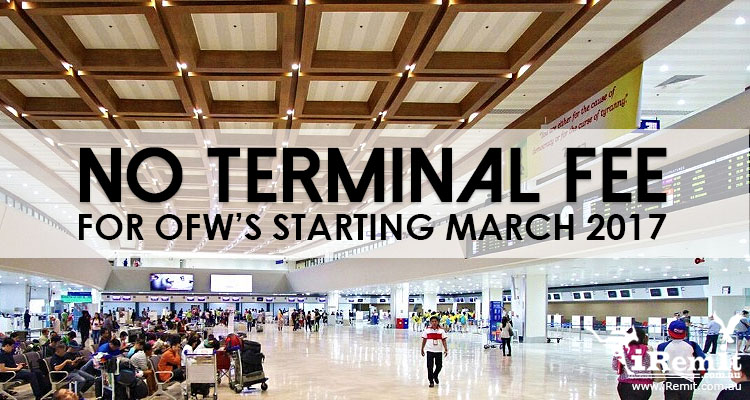 So, here’s a bit of good news to start off the year: OFW’s will no longer have to pay the Php550 terminal fee starting March 2017. (Yipee!)

This was announced over a month ago by Ed Monreal, the general manager of the Manila International Airport Authority (MIAA), at a news forum at the Manila Hotel.

The airport terminal fee was imposed on OFW’s by the Ninoy Aquino International Airport’s (NAIA) previous management. As a result, an additional Php550 was applied to airplane tickets purchased online or directly from an airline’s ticket offices.

Now, however, the MIAA general manager’s office is coordinating with international airlines and working out the logistics to fully revoke this fee approximately two months from now.

In the meantime, OFW’s can claim their refunds at the airport before departing the Philippines as they head back to their respective countries for work.

As it stands, the total collections for the terminal fee now amount to about a billion pesos. Half of this amount is eligible for OFW refunds, but many OFW travelers are either too busy to claim theirs or are simply unaware of this policy.

Thus, Monreal also announced that his office will now refund the said fees to any OFW who can show the passport and e-ticket or boarding pass they used on their trips abroad, even if these may have been used several years ago.