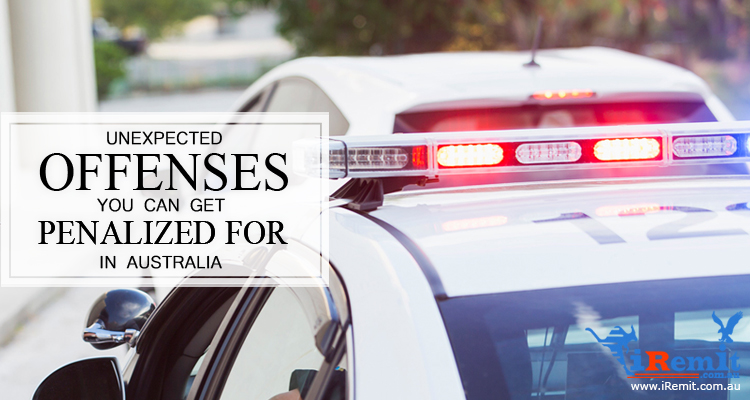 By Serena Estrella in Life in Australia
March 9, 2017

One of the hardest things about moving abroad is having to adjust to a new way of life. You’ll probably have to learn a new language or brush up on your English, drive on a different side of the road, putter around the house without helpers, and all too often, deal with penalties that are ACTUALLY being implemented.

In the Philippines, we often joke around that our laws are more like suggestions. Sure, our Constitution has some pretty good laws in place, but you can usually circumvent these if you’ve got a certain amount of clout (friends in higher places, as they call it) and/or a whole lot of money. Remember that FHM model who used a high-ranking PNP official’s calling card to get out of a traffic violation?

However, that’s not the case in Australia. They’re quite strict about laws, and if you aren’t careful, you may find a severe penalty on your hands for certain activities that we generally ignore or get away with back home, such as the following:

If you come to Oz with a student or tourist visa, you’re generally barred from doing paid work while you’re in the country. Unlike in the Philippines, where tourist visa-toting foreigners with paying jobs don’t even get a slap on the wrist (hello, Brazilian bikini models and foreign language teachers), the penalties for doing the same Down Under are all too real.

I’m not saying it’s impossible to work without proper documentation in Australia, but if and when you get caught, you will be apprehended by the Department of Immigration and Citizenship (DIBP) and deported. And that’s not all.

Those who have active student or tourist visas and were in breach of their limitations will not only face the cancellation of such (along with potential detention and deportation), but also an exclusion period of three years. This means applying for a new Australian visa within that time will be damn near difficult, if not impossible, and even when that period has elapsed, you’ll forever have that violation on your immigration history.

So, if you have plans to go job-hunting in Australia and ultimately settle here, quit trolling the Internet boards asking how you can do that without a work visa and look up how to get the right paperwork instead. With the DIBP’s Visa Entitlement Verification Online system, employers can easily check the status of your work entitlements without asking for your passport, so don’t risk it, mate.

Car horns going off noisily, middle fingers waving in the air, and drivers who don’t seem to give a damn about the safety of other people (and their own, come to think of it): who wouldn’t miss that glorious Filipino brand of traffic?

Honestly, I can’t think of anyone who would, but if such a person actually existed and tried to simulate that kind of situation in AU, s/he would be in a world of trouble. Back home, you might be able to avoid being penalized for driving too fast or beating the red light by handing a crisp PHP500 bill to the apprehending officer, and no one would be the wiser.

Not so in Australia, where red-light speed cameras installed in busy intersections can detect vehicles that exceed the speed limit or keep moving once the traffic lights have turned red. When that happens, a digital photo is taken of the offending vehicle, along with the date and time of the offence, location, direction of travel, the speed of the automobile in question, and a plethora of other data that won’t make it possible for you to deny the offence.

The authorities will then send you a penalty notice (the digital photo also reveals your car’s plate number, so they can track down your residence), and you will get demerit points for the offence, double if you committed such on a long weekend or a holiday. A fine will also apply, as the list on this website shows.

We’ve written endlessly about Australia’s largely unspoiled natural beauty, and their stringent policies against carelessly throwing away unwanted materials on land or water contribute to that.

Individuals who so much as toss their cigarette butts onto a lawn can be fined with AUD200, and if your litter is the sort that endangers the public (e.g., broken glass, hazardous chemicals, car batteries, etc.), the penalty can set you back by as much as AUD500.

Hence, unless you want to make the Australian government rich with all the penalties they can get off you for repeated offenses, dispose of your trash properly.

While we’re at it, let’s do the same in our country too, yeah?

4. Having your music on a little too loudly.

Pop quiz: What do you do when your neighbor’s off-key renditions of Frank Sinatra’s “My Way” extend into the wee hours of the morning? A. Put a pillow over your head to try and block the sound out, B. Wake up the barangay tanod and hope against hope that s/he can tell your neighbor to stuff it, or C. All of the above?

Down Under, you have one other option: have your local council or police station issue a noise abatement direction to your neighbor. As per the Protection of the Environment Operations (POEO) Act, that order remains in effect for up to 28 days from the time it was issued. If your neighbor persists in emulating (or in this case, butchering) Frank Sinatra’s vocal stylings during this time, they can be slapped with an on-the-spot fine of AUD200.

“What? Since when is that considered a crime?,” you might ask.

We Filipinos have been cooking and eating the dried fish delicacy for so long that we’ve practically become immune to its admittedly off-putting smell. Aussies who aren’t used to it, on the other hand, often complain that it “smells like death.” (“What do you mean it’s dying?? It’s dead!” DA-ING = DYING, get it? No? Okay, I’ll stop now.)

Thus, under the same POEO Act that protects you from neighbors who abuse the videoke or karaoke microphone (or vice versa), cooking dried fish in an apartment complex is an offense if doing so inflicts the resulting odors on those who live in the same vicinity as you.

The good news is you can still have your tuyo fix if you take steps to get rid of the smell while cooking. You can opt to cook it outside (but not under your neighbor’s window, please!) so that the smell dissipates faster, light a few candles around the stove to absorb the odor, or simply lay out a few lemon halves in the kitchen to freshen the air. You can also try this pressure cooker method for an odorless process.

Migrating to a different country is not unlike being a guest in someone else’s home. They might welcome you warmly and treat you well, but you would also be expected to go by your host’s turf rules, so it’s best to steer clear of anything that can get you thrown out.