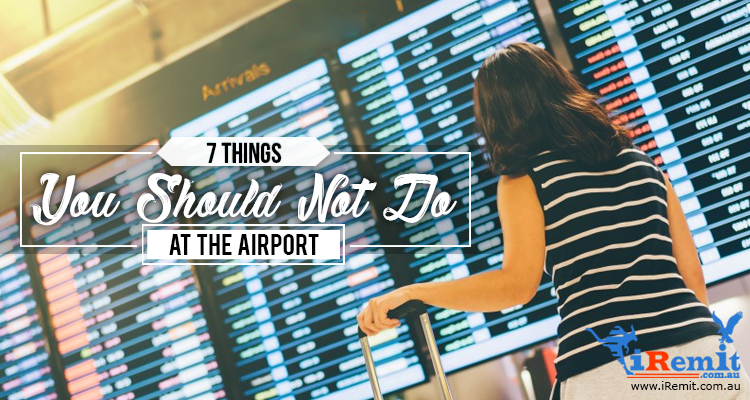 There is No Humor in the Airport: 7 Things You Should Not Do at the Airport

Whether it’s your first time traveling or you’re going back and forth, the airport is no joke. Literally. If you have the tendency to make fun and/or accidentally inconvenience other people, you should take a step back and check this list out. These are 7 things you should not do at the airport.

Joking About Bomb Threats and Anything Illegal

Let’s start with the most important one. In High School, you might be the funny one in the group with all the jokes and perfectly-timed sarcastic comments. You can still be your clowning self just refrain from going all out in the Airport.

When you’re asked, “What is in your bag”, stop yourself from saying “nothing, just a bomb”. Although you may find your small-sized shoulder bag illogically would fit an explosive, all airport authorities won’t differentiate your joke. This does not only apply to bombs. Joking about possession of illegal things such as weapons and drugs count a one-way ticket to the authorities.

Most likely, you would be held accountable. Rules in every airport might vary. But if you’re in the Philippines, bomb jokes will face hefty fines. Not to mention, miss your flight and spend your supposed vacation behind bars.

Going abroad might be a momentous event for you and your family. And as much as possible, you want to share the experience and your feelings in social media.

Watch out. For sure, you can vlog your way to the airport. But when it comes to the security check and immigration counters, halt your sharing for now. In some airports (if not all), it’s illegal to record the security areas. I’m sure your followers can wait after passing these sensitive areas.

Or unless you want to record your lock-up period. I suggest just pass it off.

Losing Your Temper. Cursing So Much

That line is so long. The Aircon is not working properly. Heck, they changed the boarding area from Gate 100 to Gate 120, from far-end to far-end, at the last 30 minutes before the flight (True Story!)!

It’s high time to Curse and F* Bomb everyone, right? Wrong. Get yourself some inner peace. Airport security can kick you out because of rude behavior. More so if you’re being an inconvenience to other people. So better just curse in your mind for the meantime.

(But if you encounter the “Tanim Bala” scam in the Philippines, you have all the right to rage out. You don’t need this. They deserve your lashing like what this lady did.)

I know that you trust security so much. There are long lines. So many processes and those cuddly bomb-sniffing dogs! You are sure that nothing bad will happen. Security is so tight anyway.

But don’t be too trusting. Have your things with you at all times. You’ll never know. Some travelers lost their bags (with their passports!) because of this negligence. You don’t want that unnecessary hassle.

Speaking of those furry friends, it is a no-no to pet the bomb dogs. Resist petting that beagle. (But it’s cute in its uniform!) Stop or experience the repercussions.

It’s not that they want to deprive the cool canine’s happiness. They just want the dogs to focus on their jobs. If too many people pet them, they might just look for people to play with, not the bombs we should be protected from.

You might find that you’re in a layover or just pretty much early for your flight. With so much time to kill, it wouldn’t hurt to take a couple of shots in the airport bar, right?

Well, that would depend if you can handle your alcohol. There have been instances were overly drunk passengers are denied their flights because of the inability to control themselves.

Some passengers even had brawls in the plane making the plane turn back and evict the intoxicated ones. It’s a hassle for missing your flight. And a nuisance for all the other passengers who just want to go to their destination peacefully.

So if you don’t want to get kicked out, better be sober.

I know. After that long flight, you just want to get your stuff and rest. But you don’t need to block the baggage carousel. This is so evident in the Philippines.

More likely, there is a clear line that separates a workable area for easy picking of luggage. But why do many people stand beyond it? Some even resort to pushing. It’s a baggage carousel, not hunger games!

Don’t be that person. You are most likely getting your stuff. So stay in the proper area.

So try to be wary of your actions. We can all have a safe a worry-free airport experience. With that, I hope you have a fun flight! Cheers!