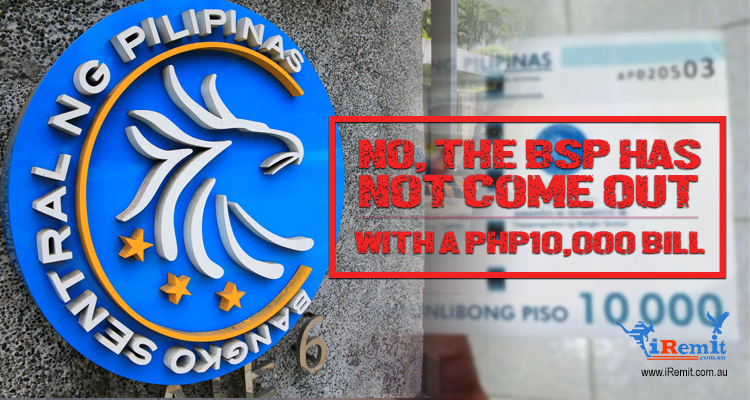 Cruising social media can be so trippy sometimes.

Last week, I was absentmindedly thumbing through my Facebook feed before bedtime when I saw a post about the Bangko Sentral ng Pilipinas (BSP, or the Central Bank of the Philippines) supposedly coming out with a Php10,000 bill. There were even photos of the said bill too, with the late and much-beloved President Ramon Magsaysay’s face on it, along with a sketch of both Mt. Pinatubo and the iconic water buffalo on the reverse side.

So, if you’ve managed to make your first million, it would be comprised of just a hundred of these so-called Php10,000 bills. What a thought.

Except that the Php10,000 bill turned out to be another bit of fake news. Upon closer inspection, it shouldn’t have been a surprise. The banknote in the photo featured Amado M. Tetangco Jr.’s signature as the BSP Governor when the current one is actually Nestor Espenilla, Jr.

Still, enough people were spreading the fraudulent photo on the popular social media platform that the BSP was compelled to release a public warning. “The Bangko Sentral ng Pilipinas (BSP) has not produced and has not issued a 10,000-Piso New Generation Currency (NGC) banknote,” so went the BSP’s statement from last Saturday, “The forgery of Philippine banknotes, as well as the use and possession of forged banknotes, are punishable under the law.”

“We advise the public to report immediately to the police or National Bureau of Investigation any forgery, use, or possession of Philippine banknotes, for appropriate filing of criminal complaint against those persons involved.”

The BSP also released an advisory the day prior to remind everyone that the NGC banknote series only comes in six denominations: Php1,000, Php500, Php200, Php100, Php50, and Php20. The public is thus being counseled to preserve the integrity of Philippine currency by sharing only accurate and verified information.

In other words, just because it’s on Facebook doesn’t always mean it’s true. Words to live by indeed, friends.