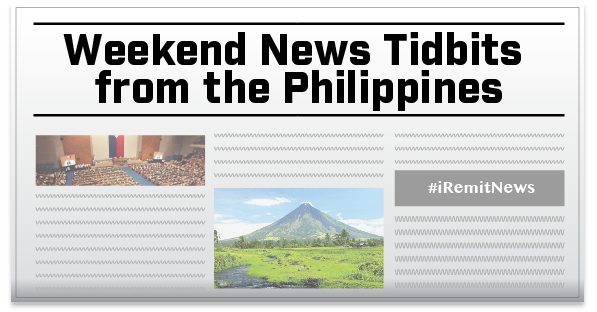 It’s the last month of 2016’s first Quarter and the election campaign period has begun. So far, Poe and Binay are leading the presidential race with Santiago at the bottom.

Unfortunately, in the first of three live Presidential debate, none of the real issues were answered nor were the candidates able to spell out their plans. It seemed that for the first round of debates, Filipinos are still looking at the personalities of the candidates and not their abilities.

Who do you think will be able to answer most of the country’s immediate needs and solve the deep wounds brought by conflict in Mindanao?

Still the richest man in the Philippines for eight straight years is 91-year-old Henry Sy. For those who do not know who he is, he is owner of SM investments Corporation his business includes SM Malls, SM Supermarkets, SM Hypermarket, Savemore, SMDC Condominiums and commercial buildings, hotels and other leisure venues, BDO and China bank. The retail magnate owns over 200 store outlets all over the country and is worth $12.9. He stands as the 71st richest in the world.

John Gokongwei, Jr follows the list with $5 in net worth. His cash rolls in with JG Summit involved with food and beverages, airlines, telecoms, property development, banking, hotel and power generation. He is 270th richest man in the world.

The third richest man is none other than Mr. Lucio Tan. With a $4billion networth he has 100 per cent control of Philippine airlines and have other businesses in property development, beverages, spirits and tobacco. He flies in as one of the world’s billionaires at number 380.

George Ty comes in 4th (#421) with $4.7 billion. Owner of the country’s second largest bank in terms of assets, Metrobank.

Three Filipinos are tied as the 5th richest (#569) worth $3 billion. One of them is David Consunji who is a self-made billionaire from his businesses in power generation, real estate (DMCI) and infrastructure.

The owner of the Philippine McDonald’s franchise, Mr. Andrew Tan is also owner of Alliance Global and has businesses in food and beverage (Emperador), gaming and real estate is also 5th richest in the country.

Owner of the “fastest-growing Asian restaurant chain in the world,” Tony Tan Caktiong completes the triple tie with $3billion net worth thanks to the mass appeal of Jollibee in the Philippines and its global presence in the Middle East, the US, Asia and soon in Australia.

Mr. Enrique Razon, Jr.’s International Container Terminal Services (ICTSI) made him the 8th (#722) richest man in the country with ICTSI present in Eastern Europe, Africa and the US. The family has been in the business since 1916.

Husband and wife partnership can really work in business as well. Coming in as the Philippines 9th (#1121) richest with $1.6 billion in net worth is Lucio and Susan Co. They are behind the success of the second largest retail business in the country, Pure Gold. The family also dabbles in businesses like “money transfer, retail pharmaceuticals, office supplies, gaming, hotels, wine distribution, and property development. “

Mr. Robert Coyiuto, Jr. is also the 9th richest in the country. His money comes from being the chair of Prudential Guarantee & Assurance, chair and ownership of PGA cars (distributor of luxury brand cars in the Philippines) and his 30% stake at the National Grid Corporation of the Philippines.

The International Monetary Fund (IMF) predicts an increase economic growth for the Philippines to double digits over the next 15 years.

The Philippine government said it is going to increase infrastructure spending to 5 per cent from last year’s 3 per cent.

Reports released showed that in 2013, the Philippines has “one of the lowest public capital stock of 35 per cent of the GDP” compared with 72 per cent ASEAN average. This makes the country “the lowest in ASEAN and substantially lower than ASEAN average” in terms of infrastructure.

For the IMF, the Philippines needs to have its infrastructure gap solved to “raise potential growth, reduce poverty and external imbalances.”

$100 million in illicit funds were detected by Philippine financial regulators.

News about illicit money entering the Philippine banking system caused the Anti-Money Laundering Council (AMLC) to conduct an investigation. So far the report found that China-Based hackers “hit money” from Bangladesh, sold it to the black market and then deposited it in Makati banks.

The money is used by gamblers playing in local casinos and are then moved out of the country in a few days.

Senate Committee Chair on Banks, Financial Institutions and Currencies, Senator Serge Osmeña, warned that if we become blacklisted with the Financial Action Task Force on Anti-Money Laundering our banks will find it harder to transact with banks in New York and London. This will result on higher transaction cost when dealing with foreign banks, it may also affect remittances of migrant Filipinos, online shopping of imported products and Filipino credit cards may not be honoured by international banks.

The Philippine Amusement and Gaming Corp (PAGCOR) is also looking into the case.

Meanwhile the Bureau of Internal Revenue (BIR) said that they cannot do anything about it yet until AMLA files a case and the document becomes public.

Osmena said that the criminals used the exclusions of casinos from law as loophole.

While most of the world keeps tab on China’s economy, the Philippines together with other Asian nations watch as China builds new islands on reefs and atolls preventing Filipino fishermen from accessing traditional fishing grounds.

The Philippines sought arbitration in 2013 when China claimed that the South China Sea rightfully belongs to China citing ancient maps and writings. They refused to withdraw their ships from disputed shoals.

However, this claim does not conform to the 1982 UN Convention on the Law of the Sea.  The Philippines assert that “some Chinese-occupied reefs and shoals do not generate or create a claim to, territorial waters.”

Wang said that China wants to “contribute to the Philippines’ economic development.” He also said that the developments made “…would benefit the international community.”

Aside from affecting the Philippines, Brunei, Malaysia, Taiwan and Vietnam all have claims in the South China Sea.

The US became involved as an ally of the Philippines and because the area is highly valuable for varied maritime activities.

Other allies like Japan and Australia are also slowly making presence in the area.

Australia tries to balance its position as a US ally and China’s trade partner. Reports reveal that China is “seriously concerned” about Australia’s comment on the pace and scale of land reclamation activities. This comment is in the Defense White Paper, the same document where Australia’s 20 year military plan is laid out.

Islamic State Sympathizers in the Philippines

IS style threats and attacks continue to cast its shadow in Mindanao.

Mr. Qarni is in the IS hit list because he had publicly denounced them.  IS labels him as one of the “imams of disbelief.”

Thankfully Mr Qarni only got injured and the plan to take his life was stunted when one of Quarni’s security shot one of the assailants dead. The other two are still at large.

The Philippine military were victorious with a relatively small group of new terrorists in Lanao del Sur. They are called the Maute group who pledged alliance with IS and waves flags of the terrorist group over their two story base. Like the IS, they recruited young rebels as well.

100 kilometres away, another group of soldiers are on the battlegrounds with the Bangsamoro Islamic Freedom Fighters who also pledge allegiance to IS. The conflict broke after the Bangsamoro Basic Law failed to pass in congress.

In 2014, the Abu Sayyaf, known for kidnapping and beheading foreigners, also pledged allegiance to IS.

Despite of these, authorities believe that IS fears in the Philippines are displaced. They are convinced that that are just criminals interested in the money and not radical Islamist jihadists.

Zachary Abuza, a professor at National War College in Washington, who specializes in Southeast Asian security say that these groups get an “incentive if they can show that they are a fighting force.”

Abuza also points that the IS capability to provide money and support is the reason why it is so popular in the south and not the ideologies the group proclaims.