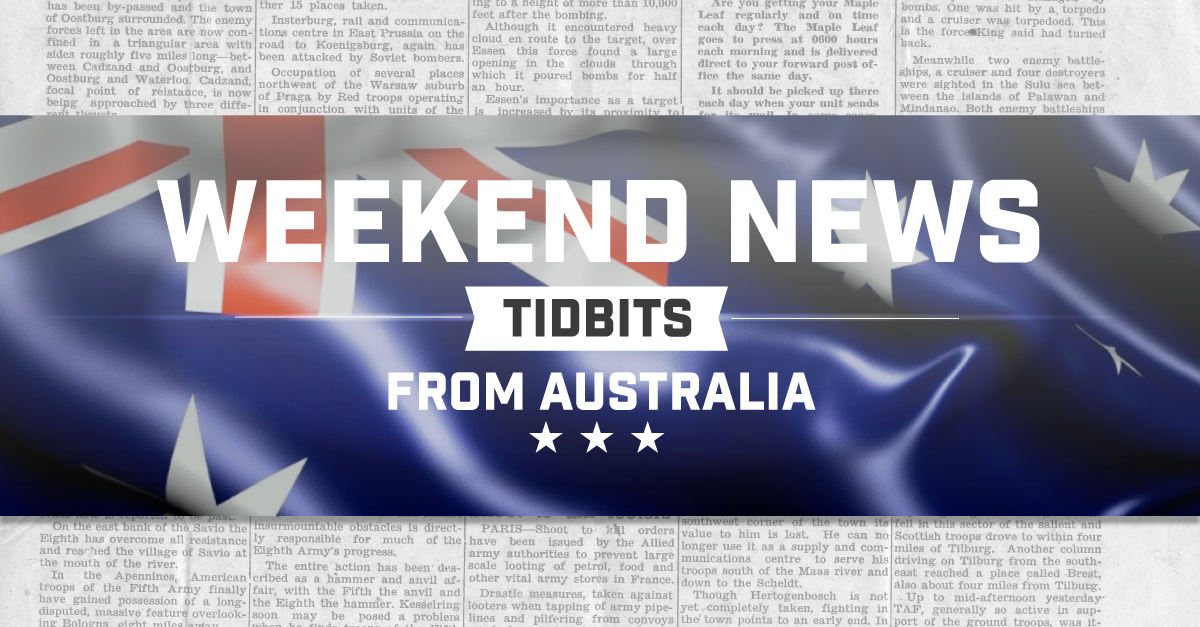 This year’s post Valentine is brimming with newsworthy stories. Here is a roundup of events that headlined the country on the third week of February.

Australia woke up Tuesday with news of 1B AUD worth of liquid methamphetamine also known as Meth or ice seized by the NSW police.“Ice” addiction is a growing problem in the country with rising numbers seen in regional and remote areas as well. The said drug is known to “cause psychosis and long term psychological issues.” Use of “ice” is “linked to violent assaults, robberies and road deaths.”   The illegal drug was confiscated from a shipment of silicon bras and art supplies from Hong Kong. The said drug bust was the largest seized by local agencies together with the Chinese Narcotic Control Commission.   Australian Federal Police (AFP) State Manager NSW Commander Chris Sheehan believes that teaming up with their Chinese counterparts would let them tackle the drug problem not just within Australian borders but also at its source. It is known that China is a source country of the drug not just here in Australia but also to other countries around the world.   Four people were charged in relation to the drug bust, Federal Justice Minister Michael Keenan said that the charges could lead to life imprisonment.   This is a win for the Australian public. According to Mr. Keenan, this haul means that “3.6 million individual hits of ice being taken off our street” and it is going to serve as a warning for organized criminal gangs who sells ice that the country has the power and the resources to prosecute.

Australia’s suburbs from two major cities have the highest case of gun-related crime.   This report comes from police data of violence from 5 suburbs in NSW and another 5 in Victoria.   Hume in Victoria has the highest record with 231 reported crimes. Police attributes this number with Middle Eastern gangs that populate the area. These are organised crime groups that are engaged in drug trafficking and they use firearms to threaten or to pay debts.     For both cities, most firearms are stolen from registered and licensed owners in farms outside the city. This trend has caused a concern from authorities, as underground firearm market balloons.   The suburbs with the highest gun-related crime in Victoria are: Hume, Casey, Brimbank, Greater Dandenong and Greater Geelong. In NSW, the top 5 suburbs are Canada Bay, Liverpool, Blacktown, Bankstown and Fairfield.   The list shows where the offenders lived in the 12 months to the end of June 2015. It should be noted that Canada Bay, NSW is a unique case. Out of the 217 cases, 200 charges are for one gun dealer alone.

The light rail project will begin by April this year to connect Sydney’s Central Business District to the eastern suburbs.   The route is from Circular Quay to Randwick and Kensington with plans to use 60-metre trams that can comfortably fit 450 passengers by 2019. This will hopefully solve the congestion problem in the future as trams can carry more passengers than buses.

The eight-month construction will surely bring about traffic congestion in parts affected. As solution, a temporary six-lane road along the eastern side of Anzac Parade between the Albert Cotter Walkway and Lang Road will be opened.   Northbound buses will use Moore Park busway as usual during peak hours in the morning while those going southbound should take the temporary road on Anzac Parade. On the other hand, the pedestrian and cycle path will be moved next to the roadway diversion.   The project was originally thought to take 16 months but constructing the temporary roads on just one side of Anzac Parade may reduce the construction to up to 8 months.   The temporary road will be removed once the light rail tunnel is completed. So far, the $2.1 billion project already cut 80 trees and 330 more trees are to face the same fate.

A highly contagious and potentially deadly infection caused by the Parechovirus is a cause for worry for Queensland mums. In the past three months, 55 cases had already been reported.

The virus that was first reported in Brisbane in September spread across the state. It can cause fever, rash and may also cause a type of blood infection. An infant infected with the virus was rushed in intensive care unit.   So far, no treatment or drug is available to stop the virus.

Our neighbor, New Zealand experienced a 5.7 magnitude earthquake last Sunday that made a cliff collapse at Whitewash Head, near Summer. The epicenter was 9 miles east of Christchurch.   The next day, a 6.2 magnitude earthquake off the coast was recorded by US Geological Survey with an epicenter 136 miles northwest of Auckland Island and 735 miles southwest of Wellington.