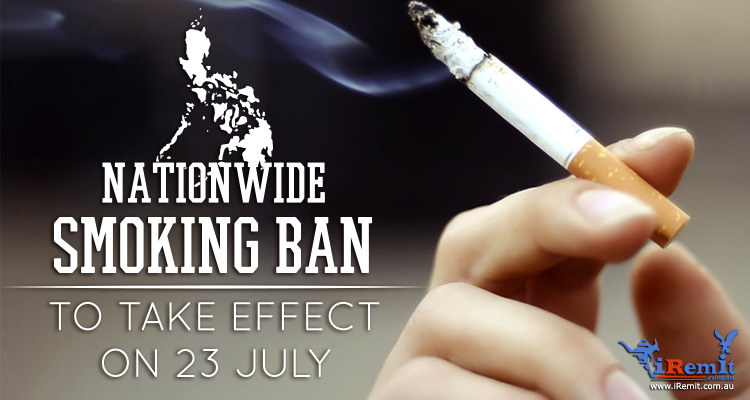 If so, you might want to make a list of the places where you can smoke a cigarette in private.

Last Friday, the Department of Health (DOH) Spokesperson Enrique Tayag clarified that the nationwide smoking ban will commence on Saturday, 23 July. This announcement followed Tayag’s pronouncement the day before that the said ban was to begin on Saturday, 15 July.

Apparently, this is largely due to executive orders being deemed effective 60 days after publication rather than after they have been signed. President Rodrigo Duterte signed Executive Order (EO) 26, which pertains to the smoking ban, on 16 May, but it was actually published on 24 May, hence the confusion.

Section 3 of EO 26 lists all the smoking-related acts that will be considered unlawful throughout the country starting 23 July, and they are as follows:

EO 26 also states that there should only be one area that’s designated for smoking per establishment, and that such should be properly marked with graphic health warnings depicting smoking’s hazardous effects on one’s health. Tayag has also said that the EO requires establishments to put buffer areas between the smoking zone and other public areas so that the smoke has a place to dissipate before it can reach non-smoking patrons.

If the smoking area isn’t properly set up as per EO 26’s guidelines, it cannot be considered as such. The implementing bodies are also set to make examples of those who will not comply.

Still, Health Secretary Paulyn Ubial admits that implementing President Duterte’s executive order on a nationwide scale will be a challenge.

“In our perspective, that is very difficult to comply with, particularly the [complete] sealing of an area indoor from the rest of the facility,” Ubial said. “In our many experiences, it is really very difficult to a seal off a part of a building or establishment from smoking, because even in the very small spaces, the smoke can go through. We will just have to see how the establishments will comply because if they don’t comply there will be sanctions.”

The Executive Order banning smoking nationwide is one of President Duterte’s campaign promises coming to fruition, as the former mayor supposedly had a smoking ban in place in Davao City during his decades-long term.