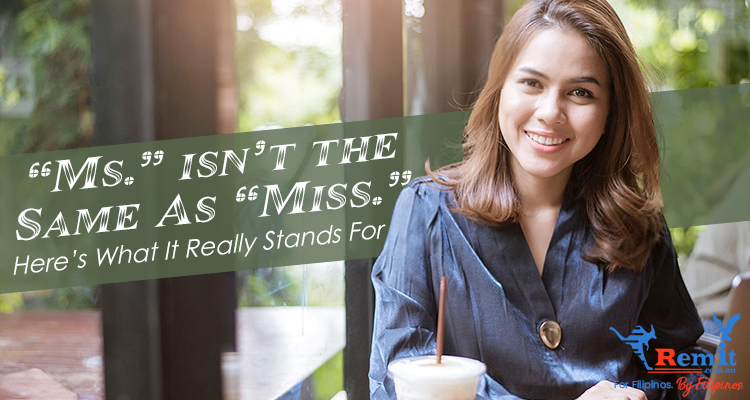 Man, English is such a tricky language. “Heart,” “beard,” and “heard” rarely differ in spelling, but they don’t rhyme. Neither do “retain” or “Britain.” And yet, “hiccough” and “cup” do. Agh.

Here’s another fun tidbit for you as well. “Ms.” isn’t an abbreviation at all. Nope.

As we all know, “Miss” refers to unmarried ladies of all ages. “Mrs.,” of course, pertains to married women, with their husband’s surnames usually following the title.

(In case you’re wondering why there’s an “r” in “Mrs.,” it’s because it wasn’t always pronounced “missus.” Back in the day, the lady of the house was called “Mistress,” hence the abbreviation. Eventually, people ended up saying “Missus” for short, and so, here we are.)

“Ms.,” on the other hand, is a blanket term. It simply applies to any female, regardless of their marital status. Also, it’s pronounced “Mizz,” from slurring “Miss” and “Mrs.” together.

The History Behind “Ms.”

So, how did “Ms.” come about? It initially came out in 1901, when an article in the Springfield Sunday Republican advocated for addressing a lady without revealing her “domestic situation.” “Ms.,” as the article pointed out, was simple and easy to write.

Despite that, “Ms.” only became mainstream nearly eight decades later. Feminist activists lobbied for the phrase’s common use and achieved some success in the 1980’s.

Geraldine Ferraro, for instance, practically debuted the term’s proper use. The 1984 vice presidential candidate was the first woman to run on a major party national ticket in the US. Hence, her campaign attracted a lot of attention. Ferraro was married to John Zaccaro, but had retained her maiden name. Thus, people called her “Ms. Ferraro,” although it took her male opponents quite a while to get used to it. (Surprise, surprise.)

And for the lads? It’s simply “Mr.” throughout their lives. This initially stood for “Master” as “Mister” referred to gentlemen occupied with a trade.

The more you know, eh?