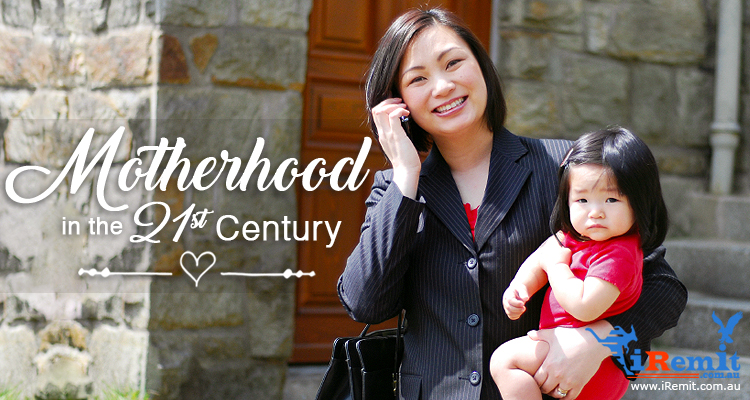 Motherhood in the 21st Century

Ah, mothers. When you’re younger, they can drive you crazy with all their rules and their nagging, but as you get older and begin adulting (looking after yourself, balancing numerous responsibilities, and paying loads of bills, BILLS!!!), you begin to marvel at how your mom was able to do all of that AND raise a couple of snot-nosed brats rather well. Most importantly, that’s also when you begin to realize how much she means to you, and if you’ve lived on your own for a while, you probably miss her all the time too.

But what does the modern-day mother look like, and how much has she changed in the past decades, if at all? Let’s take a look:

Fifty years ago, only 19 percent of mothers with small children worked outside the home. In many ways, there were no other real options or choices for mothers. If you had a job, you were expected to quit the moment you give birth. Just about all the mothers stayed at home, looked after the house, and took care of the children.

In 2017, the dual-income household is the norm, so working mothers are a lot more common. In 2008 alone, 60 percent of mothers with children under the age of six had active careers in the workforce and with the rise of remote work, that percentage is expected to go even higher.

In fact, “having it all” these days entails BOTH a successful career and a harmonious family life. Quite a tall order, but women still manage.

Going back to what Ali Wong humorously (but rather accurately, let’s admit) pointed out, the one thing that made a typical 1950’s dad a “good” dad was his ability to provide well for the family.

Having accomplished that, he was pretty much absolved of all other parental duties, and if the children were misbehaving or doing badly at school, their mother usually got all of the blame.

Today, children still call out to “Mom” whenever they’re in a fix, but husbands play a much more active role in parenting too. In some households, there is even a reversal of roles: if the wife has a better-paying job and there are no grandparents around to take care of the children, the “houseband” is the one who stays home to look after the kids (and probably takes on some remote work gigs to add to the family coffers while he’s at it).

There are also more solo parents around the world now, with many of them being mothers. While they have their work cut out for them having to be both mother and father to their children, their sacrifices certainly haven’t gone unappreciated, if we are to judge by the massive backlash that a Philippine senator’s recent callous (and frankly, rather idiotic) “joke” about unwed mothers has engendered.

“Quality time? What is that supposed to mean? You do what you can and hope for the best,” said one 80+ year-old grandmother upon hearing the term from her daughter-in-law. This, in many ways, is one advantage that 20th century moms have over their modern counterparts. Even if they were expected to be stay-at-home parents, mothers of the past century paid comparatively little heed to their young ‘uns as there was simply too much to do around the house. So long as the kids were clean, fed, dressed, and safely packed off to school and brought back, that was that.

The modern mother, in comparison, is under so much more pressure. It’s no longer enough to have healthy and well-educated kids; their diets have to be comprised of organic, fair trade meat and vegetables (screw the former if you’re raising vegan kids), the clothes on their back have to be sweatshop-free, their individually-calibrated drinking bottles have to be 100% plastic-free (wouldn’t want them to get cancer from a drinking bottle), and you’ve got to enroll them in multiple language classes, advanced mathematics courses, and at least one extracurricular activity before they turn three, just so they’ve got a better chance at getting into a prestigious university when they graduate from high school. (Hence, tiger moms and helicopter parents coming out of the woodwork.)

I jest, of course, but any modern-day mother would recognize the heightened expectations that society (and other moms) practically heap upon any person with a uterus in modern times.

So, on this second Sunday of May, let’s not forget to pay tribute to the first (and perhaps the last) woman who loved us unconditionally. Mom/Mummy/Inay/Nanay/Momsy may not be perfect (heck, neither are we kids when you think about it), but whether we were born in 1965 or 2001, everything she has done has been intended for our benefit.

Happy Mother’s Day, ladies! We here at iRemit salute you.