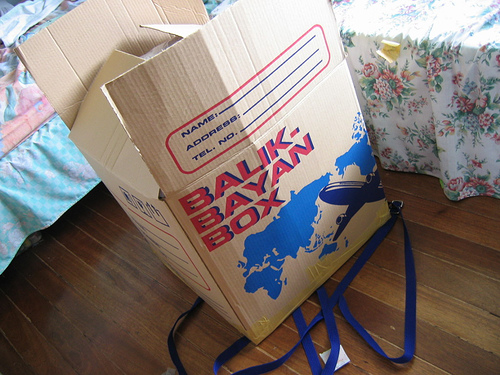 Migrante International calls Friday, August 28, “No Remittance Day” in the midst of their continuing protest against the move of Bureau of Customs (BOC) Commissioner Bert Lina to start conducting stricter inspection on balikbayan boxes. This call for cooperation from overseas workers around the world continues despite President Aquino ordering the BOC to stop random physical inspections.   Junk P600M revenue target   Connie Bragas-Regalado, Migrante chair, says that although they were happy that Aquino stopped the BOC from performing random inspections, they are also concerned about the P600M target revenue that the Customs is running after.   Customs head Lina had blamed his decision to implement stricter inspection guidelines on their monthly losses that amount to P50M, or P600M annually. He further stated that smugglers have been taking advantage of the duty and tax exemptions placed on balikbayan boxes.   Lawmakers side with OFWs   Lina’s decision sparked outrage not only across overseas Filipino workers and their families, but in the ranks of public officials as well. Lawmakers have been calling out for further inquiry on the BOC’s processes.   Senator Miriam Santiago, for instance, has filed Senate Resolution no. 1534 to look further into the matter. “The Bureau of Customs seems aware that balikbayan boxes, when opened by their personnel, are sometimes pillaged,” she says, “What have officials done to rid their ranks of thieves?”   Other senators have also asked for bigger exemptions for OFWs, one example of which is Senator Ralph Recto. Proposing the Balikbayan Box law, he asks that the tax exemption based on the contents of balikbayan boxes and the maximum value allowed for each box be raised.   At present, a $500 ceiling is placed on each balikbayan box based on BOC Memorandum Circular No. 7990. This memorandum was passed in 1990, making it antiquated, according to Recto. He then proposes that the limit be increased to $2,000.   Special thanks to Angela Sabas for the main image.