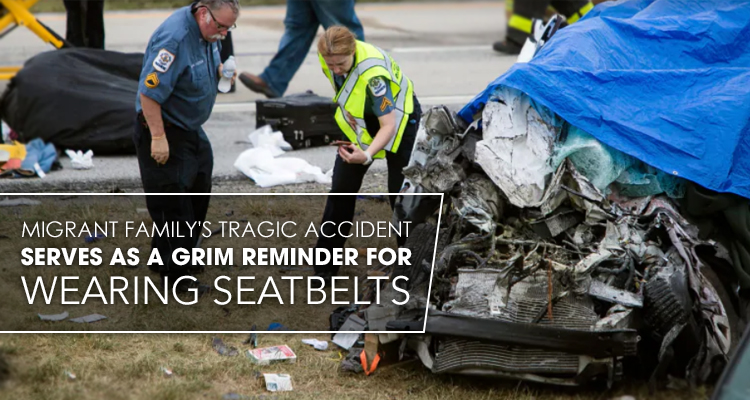 If you’ve ever seen the 1998 film called “What Dreams May Come,” you’ll know that the premise is a nightmare for any parent. Okay, spoiler alert: basically, a woman’s children die in a car accident, and about a few years later, her husband meets his untimely end in the same way, leaving the woman all on her own.

“A whole family lost to car crashes. Enough to make a person buy a bike,” the widowed Annie Nielsen mused after all the tragedies that occured in the film.

And that’s probably what’s going through Mary Rose Ballocanag’s mind now. Last week, she and her migrant husband were traveling to Ocean City with their children for their family’s annual summer vacation when a heavy-duty pick-up spun out of control in the wrong direction and hurtled straight into the Trinidad family’s Toyota Sienna minivan. Audie Trinidad, the family’s 61 year-old father who had migrated to the US decades ago, was pronounced dead on the spot.

All four daughters died in the back of the vehicle, with none of them wearing seatbelts. Their 53 year-old mother was the only survivor, and is currently being treated for a wide range of injuries at Christiana Hospital.

Just imagine recuperating from severe injuries while arranging for the burial of your entire family. I certainly can’t, nor would I want to.

Statistics have estimated that an average of about 262 road crashes occur in Metro Manila alone every day. The Philippine Department of Health (DOH) has also reported that these are the second leading cause of death among children under the age of 17. And the saddest part about all this? Half of the injuries and deaths from car crashes could be prevented if we all remembered to wear our seatbelts.

Here are some guidelines to review so that we can all keep ourselves and our families safe while on the road:

1. Seat belts are never for sharing.

All passengers must have their own.

2. Don’t put babies or toddlers in your lap while using a seatbelt.

Opt for either a car seat or a booster seat, depending on your child’s age and/or height. As a rule, rear-facing car seats are best for babies and children under the age of 2 while forward-facing car seats with harnesses are suitable for toddlers or preschoolers. If a child has outgrown either but is under 4 feet and 9 inches in height, they can use belt-positioning booster seats until they’re tall enough to use a seat belt on its own.

3. Install car seats in the middle of the back seat whenever possible.

This is the safest place for a child in the event of a car crash. Furthermore, children under 13 years of age should stay in the back seat.

5. Do not tuck the shoulder belt under your arm or behind your back.

Otherwise, your body will be left unprotected while the vehicle is in motion. Improper use of the shoulder belt also makes you vulnerable to serious injuries in the event of a collision or sudden braking.

Car accidents remind us that life as we know it can forever be altered in the blink of an eye. Whether you are an heir to the world’s most powerful monarchy or an ordinary Filipina migrant out on a family trip, all it takes is one careless driver or freak road accident to rob you of the one/s you hold most dear.

Given that, isn’t being mindful of yours and your loved ones’ seatbelts a small price to pay for making sure that none of you will have to endure the pain of having to bury a family member after a car crash?