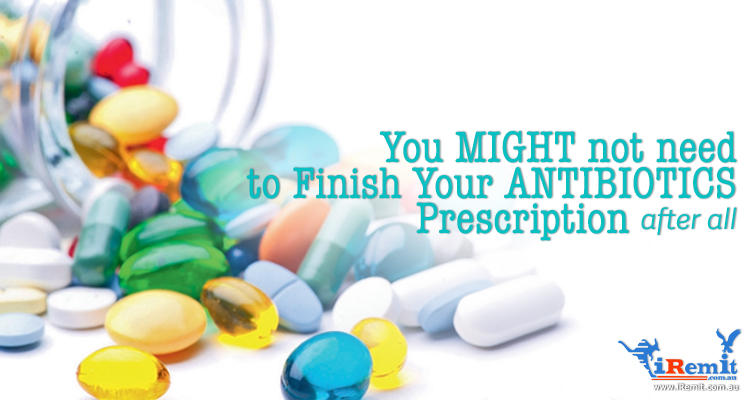 By Serena Estrella in Health and Fitness
September 8, 2017

You MIGHT Not Need to Finish Your Antibiotics Prescription After All

“I need to put you on antibiotics.”

That’s one phrase that can make you groan once you’re old enough to make your own doctor’s appointments and pay for your own medical bills (oh, the horror!). For one, antibiotics are EXPENSIVE. I remember having to shell out nearly Php1,000 on three days’ worth of Zithromax for a cough that was getting out of hand. Furthermore, being on antibiotics can bring about unpleasant side effects like stomach aches, headaches, rashes, and so on. Killing off all those harmful bacteria can involve some really strong chemicals, so patients sometimes feel a lot worse before they start to feel better.

The thing is, conventional medical advice holds that an improvement in symptoms (i.e., feeling better) doesn’t necessarily mean that an infection has completely gone away, so doctors often recommend finishing off an antibiotics prescription even if the patient no longer feels sick. This is also believed to keep more virulent strains of disease in check: the fear of under-treating patients dates all the way back to when Alexander Fleming, the father of penicillin, discovered that bacteria quickly got used to the said antibiotic and evolved into a more dangerous strain whenever patients took an insufficient dosage.

Now, however, new evidence has emerged that always finishing a course of antibiotics might actually be doing you more harm than good.

Last July, ten leading experts published a new article in the British Medical Journal that taking antibiotics for longer than necessary puts the public at greater risk for antimicrobial resistance. Shorter treatments, they found, tend to reduce the exposure of bacteria to antibiotics, thus reducing the speed by which disease pathogens develop resistance. (TLDR version: the longer you take antibiotics, the faster the disease-causing bacteria will grow resistant to them.)

Lead author Martin Llewelyn, who currently serves as the authority on infectious diseases at Brighton and Sussex Medical School, is thus calling on policymakers, educators, and doctors to stop telling patients to “complete the course.” Instead, they should be advised to stop the treatment when they feel better.

Such an approach sounds promising, but it can also be potentially confusing for patients since we each have subjective gauges for determining whether we feel better or not. We should also bear in mind that there are cases that really do require extended treatment courses – such as if a patient’s immune system were compromised, or if the bacteria in question is a slow-growing sort or lies dormant before striking, such as tuberculosis.

Perhaps what we need to do is find the middle ground between the latest findings on antibiotics and traditional medical teachings. In any case, it’s high time to review and maybe change the conventional prescribing practices so that antibiotics can simply be used to reduce the bacterial burden down to a level where the patient’s own immune system can handle things.

Best check with your doctor before you attempt to stop your antibiotics, though, just to be on the safe side.