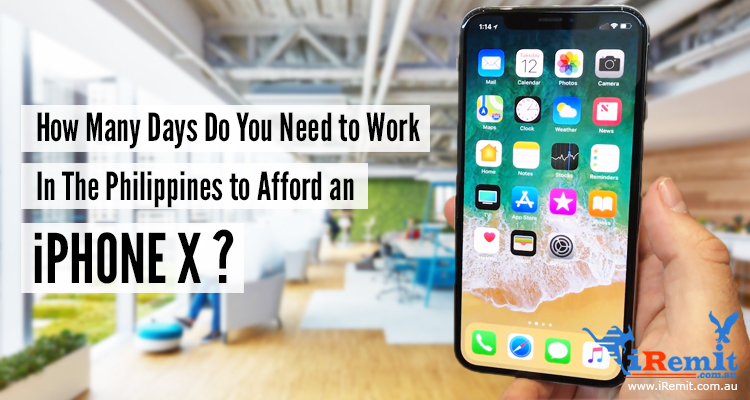 How Many Days Do You Need to Work In The Philippines to Afford an iPhone X?

When it comes to mobile phones, there are two kinds of people, and no, I don’t mean the Apple vs. Android binary.

The first group of people don’t change phones until they’ve used them to the point that the mobiles are merely held in place by cellophane tape and prayers. I happen to fall into this camp. I held on to my iPhone 4 for five years, and by the end of that time, it was a scratched and banged-up old thing that no longer picked up on roaming signals whenever I went abroad and would freeze up on me at random times throughout the day.

The second group of people are the ones who need to have the hottest mobile phone in town the moment it comes out. It’s one expensive hobby, but it shouldn’t be a problem if you can afford it or if you’ve got one of those post-paid plans that reward you with one of these high-tech babies every few months. The trouble is, most of the people who fall into this camp happen to be located in the country’s poorer regions.

Now, the National Capital Region (NCR), Cebu, and Davao currently hold the record for the highest minimum wage levels throughout the country. For the sake of comparison, let’s see how long would it take minimum wage workers in these regions to be able to afford an iPhone X:

You should note that the computations above are based on a six-day work week and don’t exactly take taxes and daily expenses into consideration, so the actual time it would take a minimum wage worker to come up with enough for an iPhone X would be longer. At this point, we’re only talking about those who work in the country’s richest and most developed areas. Those located in other, poorer regions could possibly take up to a year to be able to do the same, and by that time, Apple could very well come up with yet another newer, flashier, and even more expensive model at the rate they’re going.

Anyhow, the point of this exercise is for us to stop and take a long, hard look at our finances and priorities. Sure, the iPhone X seems really great and all, but do most of us really need it? After all, a phone’s primary function should be for calling and texting (and okay, a bit of Internet-browsing since we’re in the Information Age and all), right? Surely, there are many other phones out there on the market that can do the job but won’t require you to go into year-long debt.

If you really, really, really want a top-of-the-line iPhone, you can look at which daily expenses to give up to help you save for one rather than adding to your credit card bills. Who knows? You may very well decide to stick to having a healthy bank account rather than just looking rich by the time you come up with a sizeable amount.