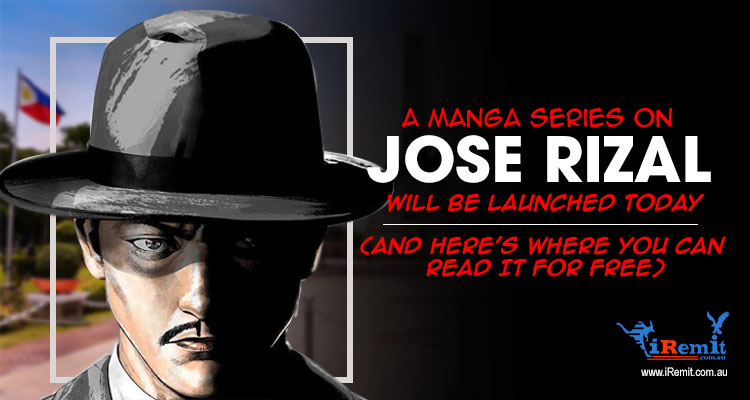 On this day, about a century and a half ago, our national hero was born. Dr. Jose Rizal was no soldier, but his novels “Noli Me Tangere” and “El Filibusterismo” have long been credited with sparking the 19th century revolution that broke off Spain’s three hundred-year hold on the country.

The good doctor even turned out to be a martyr to the cause. Because his works were so effective in stirring up dissent and civil disobedience against the abusive colonizers, Rizal was sentenced to a lengthy exile on the island of Dapitan and was eventually executed by firing squad at the ripe old age of 35.

Thus, each and every Filipino child grows up learning about Jose Rizal’s life story along with the numerous sacrifices he made to help bring about the Philippines’ freedom and independence. And today, on the 157th anniversary of his birth, he’s getting perhaps the ultimate in geeky tributes: his own manga (Japanese comics) series.

Volume 1 of “Jose Rizal” will be released in both Japanese and English today. It was commissioned by Torico Company, a Japanese publishing and distribution company, after one of its representatives became curious about the hero’s bronze statue in Tokyo’s Hibiya Park.

This led the Japanese national to research on Jose Rizal and he soon discovered that the latter had an impact not just on his motherland, but in several other countries as well. “I began to wonder why a bronze statue of a Filipino was in Japan,” Torico Company’s Takaru Ando recounted, “Japan, too, was affected by the genius of Rizal, who had changed his country not through violence but through his knowledge and hard work. More than anything, I believe that he would be a good subject to let Filipinos and people all over the world see the appeal of manga and thus had the story told in manga form.”

TORICO then tapped the award-winning artist Ryo Konno and writer Takahiro Matsui (who had worked in Southeast Asian countries including the Philippines) to work on the illustrations and storyline, respectively. They also requested Davao-based Creative Connections and Commons (CCC) to assist with the upcoming Filipino translation.

Like many Filipinos past and present, Rizal also spent a considerable time in Japan. His travel records indicate that he lived in Tokyo and Yokohama for a month and a half in the springtime of 1888. Apart from studying the language, he also had a love affair with Seiko Usui, the beautiful and intelligent daughter of a samurai, and allegedly would have married her were it not for his patriotic calling.

Should you wish to read the manga, you can access the English and Japanese versions for free here starting today, 19 June 2018. New pages will be released every Tuesday hence, until 28 August 2018, with all ten volumes spread over three chapters: Unreasonable Life of Filipinos Under Spanish Rule, The Social Reform Born from the Novel, and Rizal’s Legacy.