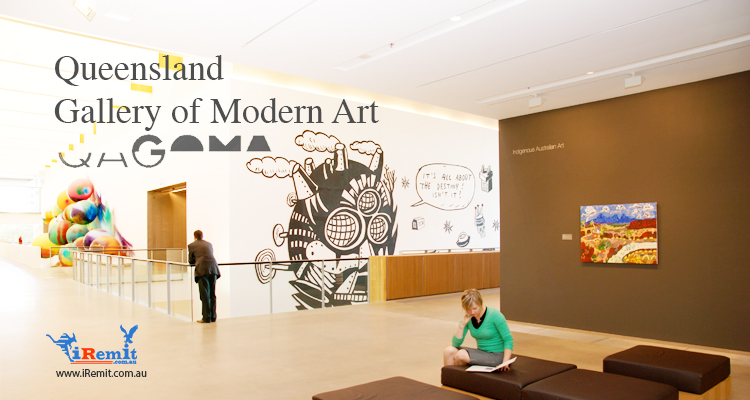 By Serena Estrella in Life in Australia
September 20, 2016

Making Sense Of Modern Art at the Queensland Gallery

Modern or contemporary art is one of the most puzzling art forms out there. With classical art, you can at least tell if a painting is good or not if the subject was drawn realistically or beautifully, but with contemporary art, the work doesn’t even have to be pretty to look at. It simply has to be interesting or challenging (whatever that means).

One good thing about quality modern art, however, is that while it isn’t always pleasing to the eye, you often find yourself pondering its impact or meaning for days after viewing it.

At the Queensland Gallery of Modern Art, they aim to make it easier for you to do exactly that. Although it’s relatively new, having opened officially back in 2006, it is part of a much older institution that is the Queensland Cultural Centre. The futuristic-looking building was intended to complement the original Queensland Art Gallery building, which is about 150 metres away. Designed by the renowned Sydney architecture firm Architectus, it covers about 25,000 square meters, with the largest exhibition gallery onsite spanning about 1,100 square meters.

A mere ten years after its opening, the Queensland GOMA is now recognized as having the largest gallery of modern and contemporary art in Australia. Should you find yourself in the neighborhood, be sure to check out some of the gallery’s most interesting works and installations on display:

This Fujian-born artist has long been working with gunpowder as a form of protest against the controlled artistic tradition and social climate in the land of his birth. Though known for “explosive events” such as the one where a six-mile long gunpowder fuse burned a dragon-shaped pattern onto the sand dunes of the Gobi desert, his exhibits at GOMA are safer to look upon, though no less spectacular, to be sure.

From afar, the Vietnamese artist’s assembly of fiberglass and polymer dolls perched on lotus flowers looks like something out of a nursery or a playground. Upon closer inspection, however, you’ll notice that there is something off about the dolls, several of them sporting mutations like extra heads and limbs and quite a few resembling Siamese twins fused together. It’s especially discomfiting when you learn that this particular work sought to explore the effects of Agent Orange in Vietnam.

An accomplished make-up artist, costume designer, and photographer, Sherman is famed for her ability to transform herself into an inspiring array of character studies. She herself is the central model in her latest exhibition at GOMA, where large-scale photographs explore society’s obsession with narcissism and the cult of celebrity as well as the resulting emotional fragility.

This montage was crafted by Australia’s most renowned photography and video contemporary artist as an ironic commentary on how women in particular have been portrayed by Hollywood cinema through the years. Scenes showing typical female roles like mothers, servants, and seductresses are intercut with those exhibiting Western cinema’s ideas of love, lust, and revenge to provide a compelling and thought-provoking display

While a humongous, sculpted elephant is the first thing you notice in this installation, the real hero is actually the kuril or small native water rat a few inches away from it. This specimen is celebrated for its link to the mangroves weaving around the Kurilpa Point shoreline as the said trees’ roots nourish the diverse ecology in the area.

This installation was made to resemble a ceremonial Fijian wedding masi or barkcloth. The artists who worked on it (Robin White, Leba Toki, and Bale Jione) included Baha’i symbols into it to address the history of the Fijian sugar industry.

The works of art mentioned above are just the tip of the iceberg when compared with the rest of the Queensland GOMA’s vast collection. Fortunately, save for Good Friday, Christmas Day, Boxing Day, and the morning of ANZAC Day, the museum is open the whole year round for anyone who wants to either bask in the boundless creativity of the human imagination or simply see “what all the fuss is about.”