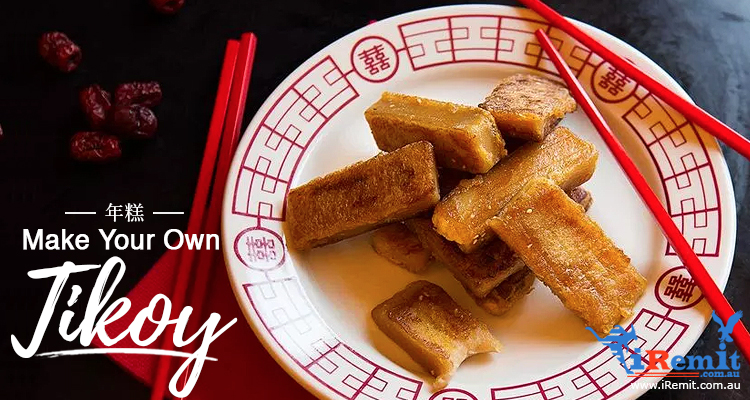 By Serena Estrella in Food and Drink
February 13, 2017

Make Your Own Tikoy

Once upon a time, Ancient China was divided into small kingdoms that were constantly at war with each other. To keep his enemies out, the King of the Wu built strong walls around his kingdom (ala “Troy,” if you will).

After the construction was completed, the King held a banquet to celebrate, confident that his walls would now render his kingdom immune from the ravages of war. His prime minister Wu Zixu was less flippant. He left instructions for soldiers to dig a hole under the wall in case the kingdom’s enemies trapped their people within.

Years after the prime minister passed away, his prediction came to pass and many citizens starved during the siege. One soldier remembered Zixu’s long-forgotten advice and dug a hole under the kingdom’s walls. In true “Cooking Master Boy” fashion, he discovered special bricks made of glutinous rice flour and saved his kingdom from hunger.

So goes the legend of “nian gao”, or what we Filipinos prefer to call “tikoy.”

Fortunately, you don’t need to go to a far-off kingdom at war to get your fix of this sweet, chewy delicacy. Boxes and boxes of tikoy abound in Binondo, and Chinese Filipinos give away lots of them during the Chinese New Year.

And if you’re feeling up to it, you can even try your hand at making your own tikoy:

Nian gao or tikoy is typically cooked by slicing it up into squares or rectangles, dipping them in beaten egg yolks, and then deep-frying them until they turn into golden brown nuggets of joy. You can even roll the said nuggets of joy in sugar afterwards for extra diabetes, I mean, sweetness.

You can also try chopping it up into chunks, steaming these, and then adding them to a beef and vegetable stir-fry for a more savory dish.