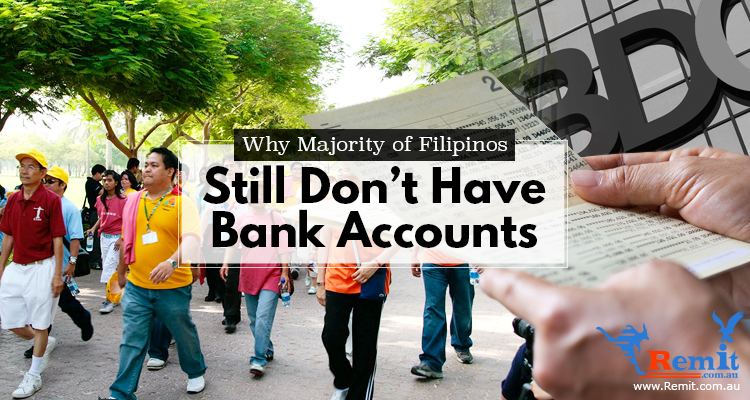 Why Majority of Filipinos Still Don’t Have Bank Accounts

Numerous scams and slip-ups aside, I can’t imagine life without online banking.

Rather than running out into the hot sun to update my passbook just to confirm if my paycheck’s come in, I can simply use my phone or my laptop to log in to my account. It’s also quite nifty in the age of online shopping. A few clicks help you make quick payments for Internet purchases, which comes in handy on weekends when most branches are closed.

So, it simply boggles my mind how some people manage without so much as a bank account. And yet, this is actually the reality for many Filipinos. According to a survey carried out by the Bangko Sentral ng Pilipinas (Central Bank of the Philippines or BSP), 86% of Filipino households remain unbanked.

Now, that’s quite a whopping majority of people who are left out of the loop, especially when you consider how highly-developed or developing business hubs like Makati, Quezon City, Cebu City, and Davao City have PHP2.7 trillion, PHP1.2 trillion, PHP320 billion, and PHP171 billion in total deposits, respectively.

When pressed about why they didn’t have bank accounts, unbanked Filipinos often gave at least one of the following reasons:

In a country where a good chunk of the population still lives under the poverty line, families are forced to spend their meager earnings on daily needs. Despite this, many of them still go hungry, so putting away a little money is next to impossible unless breadwinners somehow manage to get better paying jobs.

2. Minimum maintaining balances set by banks are too high.

In line with the first reason, a lot of commercial banks often require its depositors to maintain, on average, a minimum of PHP5,000 (about AUD122).

If you earn the minimum daily wage of PHP481 (about AUD12), and have a family of four or six to feed, storing your accumulated earnings in a bank just for the purpose of maintaining an account makes no sense.

3. The nearest bank branch is too far.

Putting up a bank branch entails operating costs like rent, utilities, and wages, so it wouldn’t be too prudent to open one in an area that’s too remote, hasn’t been sufficiently developed, or simply doesn’t have a lot of potential high-income depositors.

However, the consequence is that people who do live in such locations end up refraining from opening bank accounts since the distance would make it hard for them to retrieve their money in emergency cases.

4. Lack of trust in financial institutions and banks.

I once met a client in the province who kept all of her money in a wooden chest, or baul, as we Filipinos call it. She probably had about a quarter of a million pesos in crumpled up bills and coins, but when we asked her why she didn’t just deposit the lot, she shrugged and said that her money’s safer where she can see it.

Such logic might sound strange for those of us who would rather keep our life savings in banks, but when you think about how certain financial institutions went under and how there are all sorts of scammers out there who can skim off your account without you even realizing it, it’s not entirely far-fetched.

Of the 14 percent that did maintain bank accounts, majority of them were found to be employees working for either the government or for private companies. The unbanked percentage of the population, in contrast, were either self-employed, working for another private household or on a farm, or involved in other informal occupations.

So, what are these numbers telling us? One is that the gap between the country’s rich and poor is wider than ever, to the point that merely having a bank branch where you live can be considered a privilege.

Furthermore, they also imply that relatives of our overseas Filipino workers or OFW’s have limited options for receiving their remittances in a secure and timely manner. This is why, even in the midst of its current battles, iRemit remains committed to providing its customers with the best way for their families to receive their hard-earned cash, unbanked or no.