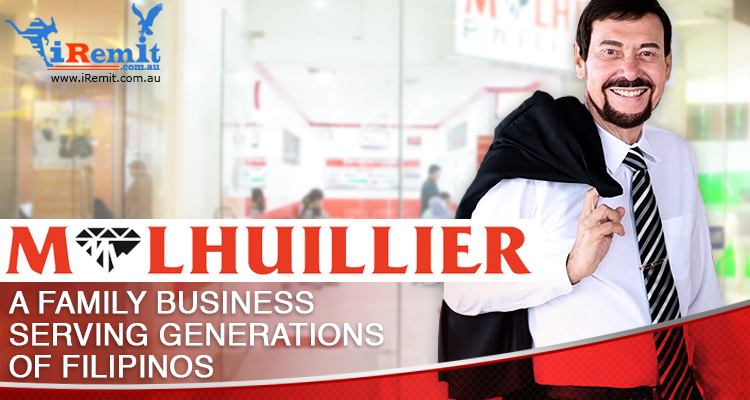 By Serena Estrella in Business and Career
February 22, 2017

I used to think that M. Lhuillier and Cebuana Lhuillier were owned by the same family, but that’s apparently not the case, although their origin stories start out the same way: French expat gets assigned to Manila, falls in love with a local lass, starts a family, and establishes a remittance services company. Typical Disney stuff, but without the singing animals.

In M. Lhuillier’s case, however, it was actually a French expat’s son who founded the company. Henry Lhuillier was a Frenchman assigned to the Philippines in the 1930’s as a jewelry sales executive for a chain of department stores. He ended up staying after falling in love with and marrying a Filipina named Angelita Escaño Jones.

After the Second World War, the expat jewelry sales executive went into business ventures like chocolate candy manufacturing, jewelry manufacturing, and money lending. The first ever Lhuillier jewelry store was housed on the second floor of Cebu’s E. Labucay Building, a commercial building that catered mostly to jewelers.

By all accounts, the Lhuillier patriarch was regarded as both a formidable businessman and a beloved community figure, with a growing number of local patrons referring to him as “Tatay.” Such was Lhuillier’s business acumen that his business steadily grew over the years and even expanded out of its original location.

It wasn’t until Henry’s eldest son Michel took over, however, that M. Lhuillier as we know it materialized. Till then, the company’s core competency was in the jewelry industry and its financial services were but an evolution of its business processes.

Michel started M. Lhuillier in the early 1980’s to service the Filipino need for financing and pretty soon, its portfolio of services grew to include services like international and domestic money remittances, currency exchange, bills payment, insurance, and quick cash loans.

Nowadays, the M. Lhuillier group of companies is actively managed by two generations of the family, with Michel serving as the chairman, his wife Amparito heading the jewelry stores and departments, and their two sons Charles and Michael overseeing the day-to-day operations of each branch.

In the 58 or so years since Henry Lhuillier started catering to the Filipino market’s financing needs, M. Lhuillier now has more than 1,700 branches, with more than 150 of them operating 24/7 and about a hundred international remittance partners.

While its business portfolio has now expanded to include operations in industries as diverse as tropical fruit processing, poultry farms, and construction, along with a restaurant that specializes in European cuisine, the company has also made it a point to support the various communities that helped it flourish.

Through a specially-dedicated arm of the company called the Organizational Productivity Enhancement Committee (OPEC), M. Lhuillier provides a wide range of community services that focus mainly on educational and livelihood programs, thus giving a whole new definition to the phrase “giving back.”