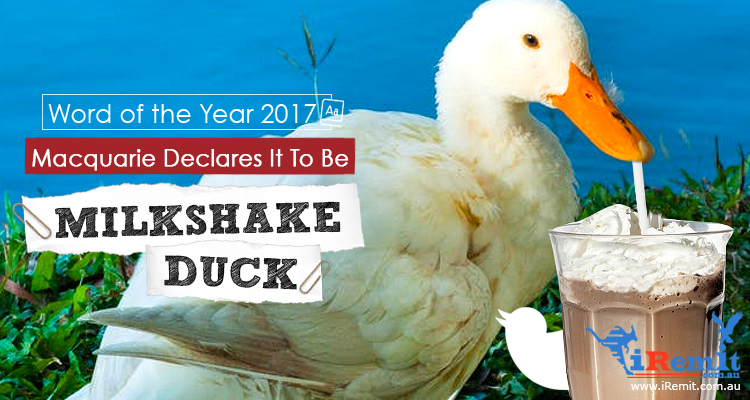 Do You Know the Word of the Year 2017? Macquarie Declares It to Be Milkshake Duck!

Language evolves every day. Our vocabulary advances with the needs of every society. Just like “binge-watching” to describe our almost addict-like watching of series. Had an 8-hour straight binge-watch? Raise your hands!

Out of every word in the dictionary, Macquarie hailed “Milkshake Duck” as its Word of The Year!

Yes! It’s Milkshake Duck. It means a person who gets sudden fame thru the Internet for something positive but later revealed to have an appalling and sketchy past. And because of this, the overnight fame quickly spirals down.

Wait, but what does it have to do with a freaking duck?

Before I lose you, imagine a viral video of a duck drinking milkshake. Who would’ve not giggled to that? But later revealed that that duck was a racist. I know. It doesn’t make sense.

It originated from Australian cartoonist Ben Ward’s tweet last June 12, 2016. It aims to explain the phenomenon happening to a couple of celebrities. Fast fame but instant social demise. It was a joke but gained traction after one milkshake duck happening.

Tipping Point of its Discovery

A year after the tweet, the official entry to the book came from one milkshake duck incident. Oxford Dictionaries picked up the word online from the podcast Reply All.

They had a discussion about Tim Soret, the high-profile gamer who co-developed the game “The Last Night“. Soret gained viral fame and applause during the Electronic Entertainment Expo 2017 for its “cyberpunk” visuals.

But later on, it was uncovered that Soret had supported the Gamergate Movement that targeted women in the gaming industry. The public uproar held the once sensational Soret to an infamous person overnight.

The public sentiment brought down the praised game to its oblivion.

The Philippines had a similar incident with Xian Gaza’s billboard proposal for Erich Gonzales. The seemingly fearless proposal became a scandalous week for Xian as people who he allegedly scammed came to light. “Kilig or Creepy” as one article might say.

To end, the Internet will surely expose another Milkshake Duck in history. Certainly, it is a much-needed word for this viral phenomenon.

But does it have enough merit to be Word of the Year? With how things are going, it surely does.