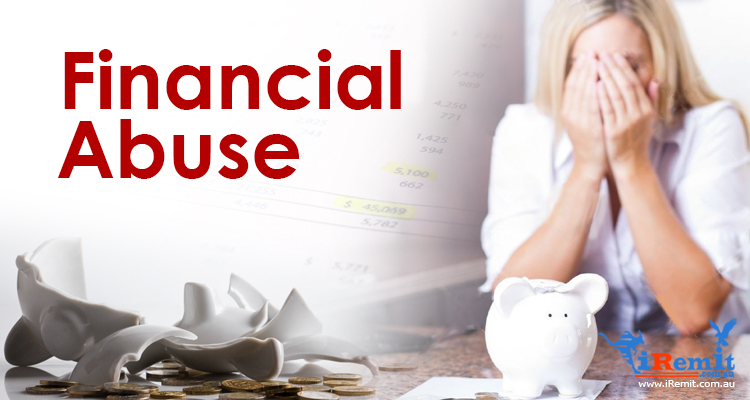 Financial abuse is defined as the misuse of a person’s assets and funds without his or her full knowledge and consent. No matter how minor the case seems, financial abuse is never acceptable!

Acknowledge the signs of abuse by starting with these examples:

1: No Possession of Financial Accounts

A person may be materialistically trapped in a relationship if he or she is not allowed to have any financial accounts such as personal savings and credit card. All the wealth of the household seems to depend on a single source. One is eternally reliant on the “provider” for survival. This scenario is often seen in romantic relationships.

For instance, Sheila was sponsored by her husband to stay permanently in Australia. Her resources were limited not only because she stayed in a foreign land, but also because she was forbidden to hold a job. Sheila’s control over her finances is non-existent.

Extortion is a common feature in a financially abusive relationship. Your partner or your parent may coerce you into obtaining a loan on their behalf. The significant catch is that they have no means to repay for it or that they control your financial accounts without discussion.

Working overseas may interplay in the situation. Since your parents deem you as monetarily stable, they may ask to put your name in the household bills. You may feel responsible to make ends meet.

3: Financial Movements Were All Tracked

Tracking the partner’s every move is an overt behavior of the financial abuser. This is synonymous with the concept of the series “Pinoy Big Brother” or the movie “The Truman Show”.

Every dollar or peso must be accounted for. Otherwise, physical or emotional abuse will follow. Sticking to the rules seems to be a better option than suffering the consequences.

In 2011, reports of financial abuse of elderly Australians spiked up. The amounts of money involved in these cases were increasing as well. The worse part was the fact that most of the abusers were their children. Some seniors kept mum due to shame.

Financial abuse may take in many forms such as:

a. when relatives or carers spend the senior’s money on shopping for themselves,

b. when relatives or carers ask for loan that they will never repay, and

c. when relatives or carers refuse to let the senior decide about their wealth.

There is no simple way out of a financially abusive relationship. It will not only tarnish the trust, but also make the other person’s life difficult. Awareness of this matter is the first step. Be vigilant and patient while you are on your road to recovery!