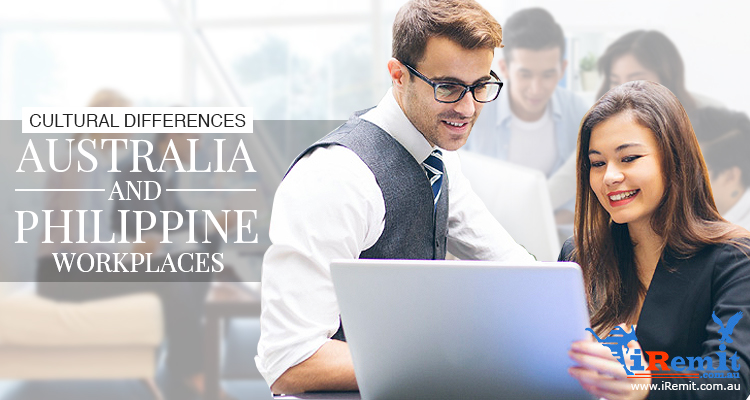 By Anna Agoncillo in Filipinos in Australia
March 7, 2017

Key Cultural Differences Between the Australian and Philippine Workplaces

Your bags are all packed and your documents are all set. You are ready to jet off your motherland and move to the exciting country of Australia! As you travel across the seas, let me enlighten you about what is to come.

There are some minor and major differences between the culture of the Philippines and Australia. For instance, Australian employees are free to express their thoughts against the opinions of the boss. This is an odd idea for Filipino employees who are highly discrete. To avoid being shocked by these divergence, it is best to educate yourself about the basics.

You may find that some of the factors do not apply to you and that is because this article is weighing the two cultures as a whole.

One of the most noticeable shifts that an expat can perceive in an Australian workplace is its overall emphasis on equality. Equality is honored despite of the gender, race, and position. For Australian employees, hierarchy is mainly used for convenience purposes. It is seen as mere formality to the point that non-citizens may perceive this approach as being boastful. The truth is, they just believe that ranks can disrupt the productivity of social relations.

For Filipino employees, they seek to maintain a non-stressful relationship with their bosses. Authority is respected and orders are readily followed without objections.

Socializing and work are two separate entities for Australian employees. It is not the same for Philippine employees.

In Australia, it is uncommon for bosses to invite their staff in their own homes. They sometimes socialize with the staff as a “normal” group. By normal, I meant that the bosses do not pull up their ranks up while outside. In fact, most of them are free floaters in the party that they did not organize. Work seems to be the last idea on everyone’s mind while partying out.

In utter contrast, Filipino bosses usually invite their staff inside their homes during special occasions. Special occasions may include work-related celebrations such as welcoming a new staff member as well as generic celebrations such as birthdays. When the boss is the host of the party, a subordinate may feel that it is an extension of his or her workplace. It is acceptable to do minor tasks even if you are outside of the office.

Australian workplace looks down upon speaking in other languages while, Philippine workplaces embrace bilingualism.

Since majority of the Aussies speak the English language alone, it is quite rude if you converse with your co-workers in other languages that they do not understand. The workplace culture can be tainted if employees feel that they are constantly excluded by a language barrier. Although Australia is open to the harmony of cultures, you can still be understood by an Australian listener.

In contrast, it is perfectly fine to speak in the alternating languages of Tagalog (Filipino) and English in the Philippine workplace.

Australian employees can overtly express their opinions while, Filipino employees do not disagree openly.

Australian employees are welcome to raise their thoughts and ideas about the issues and the opinions surrounding their discussions. They have a tendency to apply their individualistic behaviors. This is totally different from the Filipino workplace culture!

Based on the Filipino Psychology, Filipinos have a collective virtue of “hiya” in the social context. It is not entirely related to public shame! Frank Lynch encapsulated its essence best. He defined Smooth Interpersonal Relationships (Western term for hiya) as “the uncomfortable feeling that accompanies awareness of being in a socially unacceptable position, or performing a socially unacceptable action”.

Its effects on the workplace is significant and profound. For instance, Filipino employees may feel hesitant to deliver the bad news to the supervisors due to hiya. On the other hand, employees who are reprimanded in front of their peers may take in as an offense due to the breach of custom and perceived public embarrassment.

Australians are recognized for its “laid-back” or “carefree” attitude. This does not pertain to their lazy or disinterested personalities. Rather, these attitude pertains to their easy-going personalities. It is not unusual to hear statements like “it’s cool” or “no worries” on a regular basis. Having this attitude reduces the tension felt in the workplace. It is a positive attitude to absorb, if you asked me.

Filipinos are recognized for their hard work regardless of the setbacks that come ahead. They look optimistically to the future and strive for a better life for their families. These are translated in the workplace. Filipino employees do not mind staying overtime in order to accomplish their tasks.

Australian businesses exude a sense of urgency, especially in the urban cities of Sydney and Melbourne. The emphasis of the workplace is placed more on the outcomes and deadlines rather than building a lasting relationship with others. Bestowed with higher living costs, Australian employees realize that time is of the essence. This orientation may be perceived as “rushed” to the Filipino employee’s eyes.

On the flipside, Filipinos are generally oriented with relationships. This is why most meetings are preceded by “kwentuhan” or casual conversations before getting into the subject matter. Decisions made in the meetings and the organization must be approved by someone who possess a higher rank. Otherwise, the meetings typically do not proceed. Australians may perceive this as an act of wasting time and money.

As a Filipino employee who is working in Australia, you must find the balance between the two cultures by selecting the best parts of each factor. These differences will always be around but, it does not mean that you cannot address them. Learn to approach each situation in a way that is in-lined with the customs of the workplace.