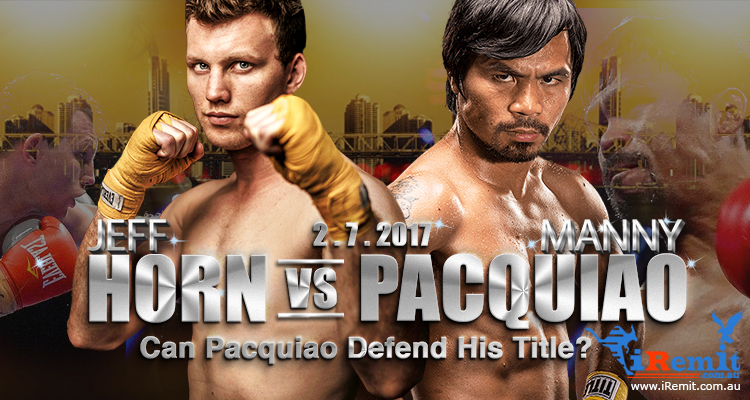 Jeff Horn vs. Manny Pacquiao: Will Pacquiao Be Able to Defend His Title?

This July 2, 2017, a battle will commence defending the coveted WBO Welterweight title. Manny Pacquiao will battle against Australian Jeff Horn.

Setting at Suncorp Stadium, Brisbane Australia, the 52500-capacity Coliseum will be filled with fans for this collision of two strong contenders.

Jeff Horn, an Australian Professional Boxer, is a relatively new challenger against Pacquiao. Some even consider this matchup as a mismatch. But his boxing prowess shows otherwise.

Horn represented his country as an Olympian in the 2012 Olympics. And is currently undefeated with 16 Wins, 1 Draw, and 11 Knock Outs in his professional boxing career.

Jeff Horn plans to battle Pacquiao with a “10-point plan” that will surely bag him the win. Will his strategy outplay Pacquiao? Will this be Jeff Horn’s biggest win thus far?

Manny Pacquiao has certainly been the most celebrated boxer in the Philippines today. With stats showing 59 Wins, 6 Losses, 2 Draws, and 38 KOs, this veteran boxer surely packs a punch.

Winning 11 Major World Titles, this left handed wonder became the symbol of Pinoy Pride. The hours of Manny Pacquiao’s fights directly attributed to zero crime rates in the streets of Metro Manila. The rare hours that, regardless of social class, unifies the Filipino people.

Also with his rise from poverty and to eventual fame, Pacquiao ventured to show business as a singer, host, and actor. Not to mention his entry to Politics, now being a Senator.

Can he juggle his Boxing Career with his other daunting roles? Will this predicament cost him his title?

For the sports savvy, there are cases where Horn can win or Pacquiao. But one thing is for certain, you will never know unless you watch this coming weekend. I’m sure I will.