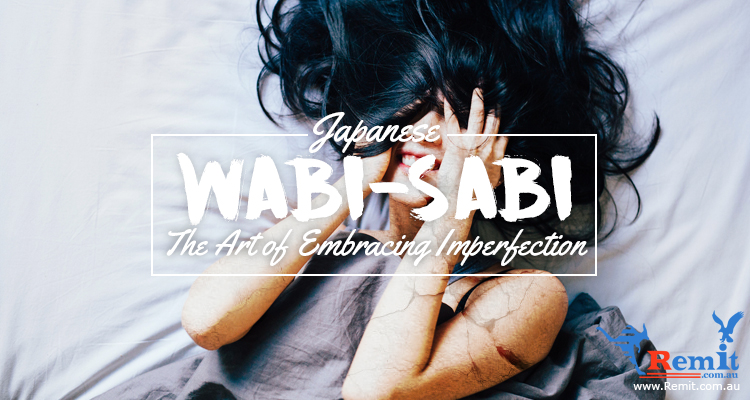 By Leandro Eclipse in Health and Fitness
May 3, 2018

When we talk about life, we all strive for perfection. We want that stunning career and long-lasting beautiful partner. Heck, we even want the perfect face, the perfect physique, and even a perfect mocha latte.

In this world with increasingly high standards, would it be nice to just to step aside and enjoy this life’s inherent beauty?

Many people are left miserable because they go through a never-ending pursuit of “happiness”. They are trapped in an inescapable hedonic treadmill of unhappiness. Striving for the superficial forever.

This may not be a bad trait in itself. But when would you be truly satisfied? Wouldn’t you want to finally feel bliss and peace?

If you’re looking for answers, the Japanese has a philosophy that might get you through. It’s Wabi-sabi: The Art of Embracing Imperfection.

What Does Wabi-sabi Mean?

No. It’s not the green spicy thing. Wabi-sabi is a way of living.

The etymology of Wabi-sabi has two connotatively negative words. But when combined together, it conceived an evolving sweetness in such negativity.

“Wabi” means “the misery or loneliness of living alone away from human interaction” while “Sabi” means “withered or aged”. The interplay of words now connotes the appreciation of impermanence while practicing intentional simplicity.

It is founded on being comfortable with embracing your true self and accepting temporality in this world. With this outlook, you learn to welcome the ups and downs of life while finding beauty in the process.

Wabi-sabi is heavily influenced by Zen Buddhism. It teaches us how to live with our current imperfections and accept it as something exquisite.

Murata Shuko, a practicing Zen Buddhist and the cornerstone figure of Japanese traditional tea ceremonies, proliferated the practice of Wabi-sabi. In his letter, “Kokoro no Fumi” (Letter from the Heart), he straightened up the veered practice of Tea Ceremonies to its symbolic roots.

Tea ceremonies were once used as a spiritual practice by Buddhist monks to aid in long hours of meditations.

But the shoguns of that time transformed this meditational celebration to just a show of wealth and power. The tea ceremonies became just an avenue to showcase their imported and expensive tea pieces and quaintly decorated rooms.

Murata Shuko applied wabi-sabi to instill the essence befitting the origin of a proper tea ceremony.

For one, the custom that time is to enjoy tea on a balcony during the full moon. Murata’s teaching deviated from the norm. He directed his students to enjoy not the perfection of the full moon but the subtle nuances created by the shadows or the clouds enveloping it.

He also wards off the use of intricate tea pieces from China and, instead, use more rustic ware from Japanese Artisans. The nuances and deliberate “flaws” in their work signify the true essence of the tea ceremony.

Later on, wabi-sabi was further exemplified by the influence of Se No Rikyu.

Se No Rikyu was the most prominent tea master that time and a revered authority in the art of Tea Ceremonies up to this date. He was commissioned by the regent Toyotomi Hideyoshi, one of Japan’s greatest unifiers, to constitute a tea ceremony that will foster peace.

He elevated Murata’s teachings and further swept away all the unnecessary luxuries in his tea ceremonies. This is evidenced by the rustic pottery directly taken from peasant environments. His teachings were so fundamental, it is passed on up to today.

His life was one of the greatest examples of Wabi-sabi. A famous story portraying this philosophy was taken from an excerpt of his life.

One day he asked his disciple to clean his teahouse. The disciple worked hard to clean every corner of the house to his master’s content. Upon arrival, he shook a maple trip to scatter some leaves.

The balance of cleanliness amidst the falling leaves brought Wabi-sabi in the estate.

Wabi-sabi With Your Possessions

Practicing the life of Wabi-sabi can be used beyond the intricacies of tea preparation. We can apply it in our daily lives. We can start with our possessions.

Remember, wabi-sabi does not say that you can neglect your responsibilities and have that pile of dirty laundry because “it’s a sign of impermanence”. It’s not an excuse for your laziness.

In fact, it states that we don’t embrace clutter. We clear out. If you did spring cleaning, it may be the time to set aside the things you don’t use anymore.

Moreover, wabi-sabi urges us to think about our purchases carefully. Only buy things that are useful and can age beautifully. It is the time to celebrate humble materials such as wood, paper, linen, stone, bamboo, and iron to name a few.

Mix the minimalism and rustic elegance as the things are influenced by time. The not “beautiful” right now shall wither to a long-lasting beauty in the future.

Wabi-sabi in Your Relationships

If you cherish your relationships but can’t stand some aspect of your friends or partner’s personality, better practice Wabi-sabi.

The key is in accepting that every individual is imperfect.

Instead of treating a person as a “project to be fixed” why not just accept them for their faults. By denouncing pressuring expectation and assumptions, you can have more time to love the person for who s/he is.

The Most Important Thing: Wabi-sabi Within Yourself

What good are relationships and material things without peace within yourself? If one thing can be taken from this concept, it should be wabi-sabi of your inner self.

This goes to the height of accepting you. Humbly valuing who you are and what you can do.

And in cases of failure, know that we can make mistakes. This degree of imperfection brings an opportunity to learn. It’s a state of mind, a state of being where we are open to change and take a second look at what we normally disdain.

If we at least practice this part, for sure, we will have greater satisfaction in the humbler moments. Hopefully, we will be happier in life.

Now, where is that cup of tea?