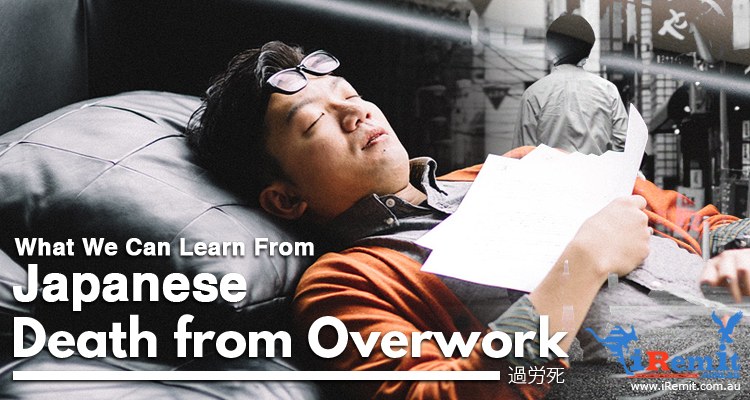 By Leandro Eclipse in Business and Career
June 27, 2017

Japanese Death from Overwork: What We Can Learn From It

The work ethics of the Japanese is unparalleled. They are known for their workaholism; clocking in very early and leaving late just to catch the last train. This dreaded scenario for some people is seemingly the norm for Nippon’s working class. To add evidence to this, they are so hardworking that a term was coined, “Karoshi“, for extreme workaholism.

It translates to “Death from Overwork”. A problem they are facing with its dedicated populace.

The incidents of Karoshi are not unusual in Japan. One in five employees is at risk of death from overwork, either from health issues or “Karojisatsu” (suicide from overwork). A white paper by the Japanese government discovered that most companies have employees recording more than 80 hours of overtime a month. This threshold attributed to the demise of our fellow Filipino Joey Tocnang. It was ruled that his sudden heart failure is traceable to his overtime hours. He clocked in more than 100 hours of overtime per month that ultimately led to his unexpected passing.

Major implications of this “work culture” contribute to Japan’s Demographic Time Bomb. With a life expectancy rate of more than 80 years old, the elderly population is deemed to balloon further incurring higher pension costs. And due to the hectic work schedule, the younger generations forego “family-making” adding fuel to this vicious cycle. Bluntly speaking, either the yuppie is simply dead or uninterested in lovemaking. With a decreasing fertility rate, only time will tell when this balloon will inevitably burst.

The Japanese Government has made steps to combat these extraordinary fundamentals. Prime Minister Shinzo Abe rolled out policies to deter businesses from bleeding their employees dry. The legislation brought upon hefty fines to a number companies, and a “blacklist” to elicit public humiliation against the infractors. Also, a “Premium Friday” was introduced to employers. They are encouraged to set off their employees at 3 pm.

Moreover, they even went to the extreme by setting up speed dating events for their citizens to boost fertility. Currently, the government is even discussing overtime limits and mandatory vacations. Certain holidays were moved to coincide on weekends. But with a typical employee not even maximizing their vacation leaves, the seemingly desperate move to force them to “relax and chill” is certainly called for.

With the rulings, Japanese Kaisha’s devised ways to help their employees to solve the problem. Japanese Inemuri or “Sleeping While Present” is now a social norm in offices. For productivity, they assist their staff to sleep with designated sleeping areas. They also resulted to switching off the lights to signal the employees to stop working.

Moving towards the Remote Working Setup

As a developed country, Japan is one of the benchmarks for an orderly and almost utopian society. The state of Japan right now might be a model for the future developed Philippines. Barring the imminent detonation of their time bomb, we can learn to safeguard our people by learning from their culture.

Similar to the Philippines’ Telecommuting Act, Japan is pushing companies to provide telecommuting options for their employees. It might be one great step for their radical fundamental problems. With the remote work setups, you will surely have more time for that sensual encounter or that work-life balance missing in the routine. As a parent, digital setups will even give more flexibility in raising your child. And, for sure, you will be thanked for the physical presence you gave in their formative years.

Adapting to this setup will bring traction to any culture especially with Japanese “monozukiri” or loosely translated as “making the best of things”. Their measure for the standard of excellence is challenged when you don’t “physically see” the subject of your scrutiny. Adaptation to data confidentiality, video conferencing and tracking productivity online are glaring obstacles. But, if it can save the quality of life and literally the lives of your nationals, I think finding a solution is just a small inconvenience.

If you look at it, it’s like seeing an accelerated view of an impending virus. We have cases of absentee parents or varying degrees of workaholism (probably significantly lower). But for what it’s worth, we should keep our minds open for this option. You will never know. This might be the one option that will change how our lives will pan out.