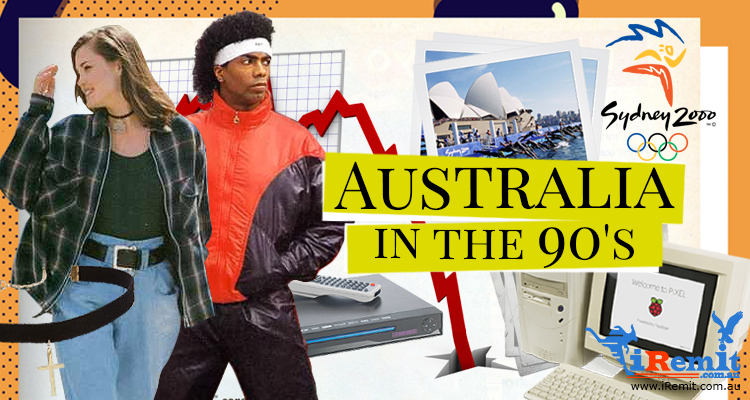 By Anna Agoncillo in Life in Australia
February 24, 2017

Interesting Glimpse at Australia Back in the 90s

Australia experienced some major shifts back in the 90s. For starters, its economy suffered through the unfortunate effects of the recession. There was also the challenge of the growing immigrant population. No to mention, the introduction of the Internet brought Aussies closer to the rest of the world.

These are just some of the highlights of the bygone decade. Educate yourself about other matters by reading this post.

I will start with one of the pressing matters – the economy. In the late 80s until the early 90s, there was a significant shift in the economy of Australia. It experienced its worst recession since the Great Depression. In fact, Singapore’s late Prime Minister Lee Kuan Yew once predicted that Australia was “at risk of becoming the white trash of Asia” due to government debt, inflation pressures, and high unemployment.

He had a point as the inflation and unemployment rates rose for several years and many Australian families battled the tides to make ends meet. Fortunately, the economy recovered. Prime Minister John Howard repaired the economy when he came to power in ’96. He reduced the government spending and implemented various reforms.

During the “dopest” decade, Australians questioned about the type of nation that they desire to cultivate. The country was shaken by the challenges of multiculturalism and Indigenous land rights.

By multiculturalism, I am not talking about several migrating individuals. I am talking about millions of immigrants! As the decade ended, over 5 million people in Australia were born overseas. These people migrated from Middle East, Africa, Europe, and Asia (including the Philippines).

It comes as no surprise that the immigrants offered their own traditions and stories to enrich the Australian culture. It redefined what signifies a genuine “Australian”. One thing was for sure, the idea that Australia was a predominantly British colony was long gone.

Moving on to one of the most interesting topics for me – fashion. If you had the flashy and vibrant style of the 80s as your baseline, you will realize that the 90s fashion was simpler and more subdued. Mainstream Australian fashion was laidback in general. Business attire saw less of the suits and more of the casual clothing. Tracksuits, trainers, and other activewear were staples in everyone’s wardrobe.

The world of fashion has proven time and time again that it recycles a few elements from the past decades. Now, the mainstream fashion in the 90s are making a comeback starting with the activewear (seen on the DKNY runway) and the choker necklaces (seen on the streets).

Sport in Australia is a reflection of the influence that the British and American cultures have on the nation. Three athletes rose to prominence in this decade. These stars were Kieren Perkins, Louise Sauvage, and Cathy Freeman. Rugby league expanded nationwide leading for it to become increasingly professional and commercialized.

Lastly, Sydney’s successful bid for the 2000 Olympics produced a boost in the national pride.

Another interesting perspective to dwell upon is the entertainment industry. Television and local programs were widely popular in that decade. In the big screen, numerous Australian movies achieved success at the domestic box office. Some of these movies had the revolutionary technology of CGI. DVD players trumped VCRs to the point that some rooms were transformed into home cinemas.

You may be wondering what type of music was booming in the 90s. Well, it is a combination of genre ranging from the melodic pop to grunge.

As the decade came to a close, many daily activities were accomplished using a computer. The computer shaped a home entertainment system that fused the movies and music together. Australians instantly received and shared information with people from across the globe.

Looking back at the past decades will make you realize how much Australia has progressed over the years. The 1990s has proven to be revolutionary with its introduction of the computer and the economy’s revival after the recession. What other flyin’ 90s fads can you recall?