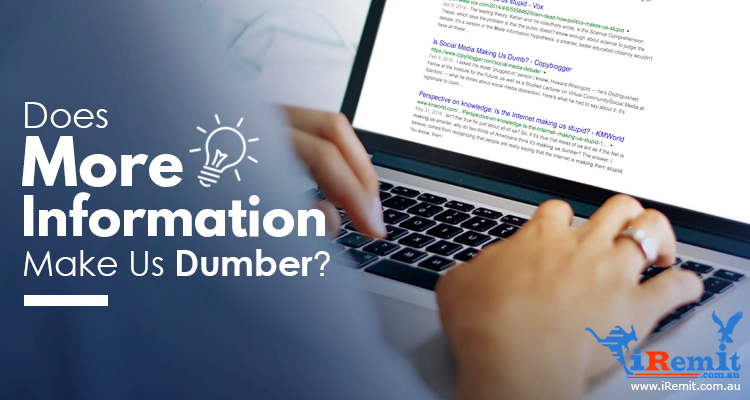 Does More Information Make Us Dumber?

The Information Age. The era where almost anything you want to know about is searchable through the Internet.

Life has been easier, hasn’t it? Back then before you can learn a new skill, you need to find a teacher who will guide in the process. Right now, some skills can be learned purely thru the Internet. It’s a free for all for everybody, right?

Humans and Machines: The Rise of Technology

Every technological innovation led to the ease of our lives. The invention of cars made us think less about transportation. The calculator somewhat relieved the arithmophobic’s (fear of numbers) worst fears. And don’t get me started on the Internet of things.

Do you know how these inventions work? You don’t need to. We just have to focus on how to use it (input) and what it produces (output).

This is called “blackboxing”. It’s when we focus on the machine’s input and output rather than the internal complexities that make it work. The mechanisms are invisible to its user. So why bother?

For example, upon writing this article, I was applying peppermint oil on my temples (head). Some of the peppermint oil accidentally went in my eye. If you ever had this oil in your eye, it was burning!

I immediately googled “How to take off peppermint oil in my eye?”. I wouldn’t have known that you need coconut oil to wipe it off. If it weren’t for Google, I might have been blind by now. (Ok, I might be exaggerating a little. But you get me.)

I didn’t exactly know how Google works. But do I care? I just want to save my burning eye.

But amidst this repository of knowledge, some argue that the Internet is not making us any smarter. And here is why.

>But over-reliance to machines may have adverse effects. For one, if you are over-reliant on one application, you might find a hard life when it’s gone.

Based on experience, I once accidentally (again) soaked my phone in water while river rafting in Taiwan’s Xiuguluan River. After a 3-hour train ride from Hualien to Taipei, I have to find my hostel in the metro.

I circled around Taipei, cramming for Internet for that essential Google maps. I was so reliant on the application when abroad, I can’t figure out where I was with just a physical map. What’s worse is that I can’t really speak Mandarin to ask for directions.

I never felt so lost in my life. If I at least honed my map reading skills when I don’t need it, I would have arrived at my destination hassle-free.

Our dependence on the Internet allows our brains to focus on other productive tasks. We don’t have to memorize the exact information; we just need to know how to find that exact information. This is coined as the Google Effect.

Why memorize people’s phone number when you can find it in your digital phonebook? Why remember the person’s birthday when Facebook notifies you of your friends’ birthdays?

The World Wide Web is fed thousands, if not millions, of information every day. Technology now is like an extension of our memory.

But then, new creative ideas are born from multiple ideas and finding which fits with which. What can be combined? What can be improved?

If we disregard keeping information in ourselves, how can we feed new ideas to the Internet?

Social Media and Our Emotions

The Internet is not the issue though because it’s really advantageous (refer to my peppermint example a while ago). It’s how we use our freed up memory.

Most people consume the Internet with almost mind-controlled swiping thru social media. If we are preoccupied with this minute multitasking, how can we digest and curate better decisions?

In fact, Psychology Today further pointed out the Paradox of more information. If we are flooded with a barrage of information, we tend to rely on our emotions to do the thinking. It’s easier. But we all know how that pans out.

Most base their decision on the “feel” of the issue. Sometimes, to the extent of personal attacks and ad hominems.

Why hear this senator’s presented facts, when he looks like a bald armadillo? Economic issues? I don’t believe him because he resembles a stupid yellow minion.

And for those that actually go beyond emotions, we are still victimized by convincing posts in social media. The spread of misinformation is rampant in all media outlets.

The scary thing is, they look like legitimate reports. An example is this headline: “Man Sues Wife Over Ugly Children“. Fake news attached to the picture above destroyed the career of Taiwanese model Heidi Yeh.

What was once a modeling stint for a plastic surgery company turned to a sensationalized legal action of her husband to his now pretty wife. And it has been in circulation for almost a decade now. Most people still believe it up to this very day.

This is alarming indeed. And if you’re in the Philippines, you must be more vigilant as ever. Some purveyors of fake news are even sourced from public officials’ blog posts.

Some share this information without ill intentions. They believe in a certain movement, they saw information that confirms their biases and shared the information. We just want to help spread our ideals.

But most have no time to check the facts before reposting. This made the Filipinos one of the most ignorant on issues based on a recent study.

We don’t know what we’re talking about, but the glaring thing is we are confident despite that. Dumber but confident with a heart.

So Does It Make Us Dumber?

Certainly, any tool held wrongly has negative effects. This era of more information is a gateway for some to be more equipped in this fast-paced world.

But for most people, it may be something that put them at par with the intellect of a mashed potato. Hot and mushy, delicious but fluffy. Beware.