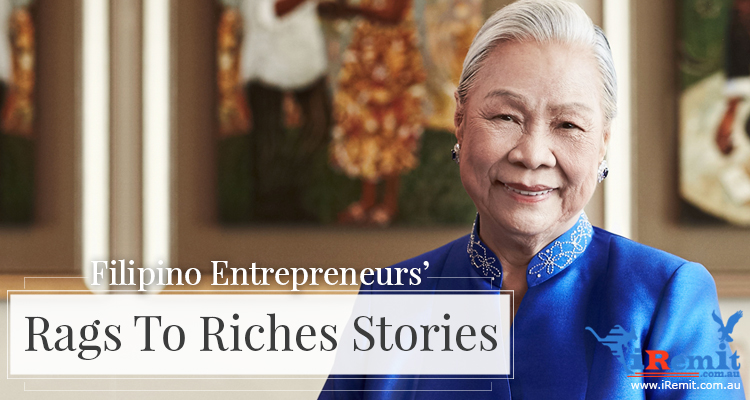 By Anna Agoncillo in Business and Career
February 16, 2017

It all begins with a dream and a business idea. Determination, creativity, and a little bit of luck can lead you to where you want to be. Keep the faith as an OFW! Struggles are a normal part of the journey. Just take a look at the lives of these five Filipino Entrepreneurs.

Your sacrifices, much like theirs, may lead to building a brighter future for you and your family.

1. From Peddler to Owner

Whenever you are advised to purchase several tablets by a doctor, one of the first thoughts that can pop into a Filipino’s mind is visiting the nearest Mercury Drug. Mercury Drug is a longstanding brand trusted by many Filipinos when it comes to quality pharmaceuticals.

On of the leading drugstores in the country was founded by none other than Mr. Mariano Que. Much like the Roman God who acted as a messenger or merchant, Mariano delivered his products to the people in need. He started his journey by selling medical capsules and vials for a certain drugstore. Using his experience, he invested PHP 100 worth of sulfathiazole tablets. These acted as oral antimicrobial tablets before less toxic alternatives were invented.

He peddled these tablets in single doses so that people from the impoverished sector can afford the medication. Through his determination, he had collated his profits and was able to build a wooden pushcart. A larger means of traveling goods entailed a wider assortment of pharmaceutical products. Other people imitated Mariano’s selling strategy, but he made a difference.

He did not exploited the masses by selling fake and expired medications like everybody else. He focused on selling quality medications at fair prices. It is evident that the best decision is to purchase from him. Soon enough, he had numerous clientele. By 1945, he was able to set up a drugstore called Mercury Drug. Mariano grabbed a humble opportunity and he was awarded for it.

2. From Odd Jobs to Renowned Empire

Life’s challenges began when Mr. Alfredo Yao’s father died when he was 12. His mother worked tirelessly as a sidewalk vendor in order to provide for the entire family. His kindhearted relatives helped him to finish high school. However, he was not able to finish college despite working several odd jobs. All these hardships did not stop the young Alfredo from reaching his dreams.

One of his odd jobs was working at a packaging company’s warehouse. On one of his many trips to the printing press, Alfredo saw the potential of the packaging business. He invested his money and time on a printing press. He aptly named his company as Solemar Commercial Press after his mother and role model. The company is a printing press for the cellophane wrappers of candies and biscuits. The budding business grew steadily during its first twenty years.

In 1979, he saw another promising technology through a machine that produced doypacks. A doypack is a sealed plastic bag, which is designed to stand upright. You can just imagine what happens next.

Alfredo tried to promote his new found machine to the local juice manufacturers, but none of them were interested. He decided to prepare his own fruit juices and use the equipment by himself. In 1980, Zest-O juice drink was launched. The rest is history!

3. From a Hobby to an Enterprise

Corazon D. Ong is a dietitian who used her expertise to create affordable and competitive processed meat products. It may sound ironic at first but, you will soon realize that her knowledge was put to work.

Making processed meat products started out as a hobby that enabled her to channel her skills and creativity in the culinary arts. She made hotdogs, meatloaf, patties, ham, and corned beef. She sold these products through her humble home business.

In 1975, she decided to go large-scale by founding the CDO Foodsphere. As the CDO’s reputation for producing affordable yet quality products became popular, so was the demand for these said products. The charm of the products relied heavily on Corazon.

You see, the innovative homemaker had a first hand grasp of a mother’s need for convenient and budget friendly lunch fixes. Moreover, she understood the unique taste preferences of Filipino children. Her knowledge of the ingredients’ nutritional values gave her products an edge.

4. From the Bookstore Employee to the Matriarch of NBS

The matriarch of the National Book Store (NBS), Philippines’ largest chain of bookshops, was not born with a silver spoon. Ms. Socorro Ramos or better known as Nanay Coring to her staff was merely equipped with a high school diploma when she worked as a salesgirl. She worked as a salesgirl for a book shop owned by her brother and his wife.

Her time in there was spent wisely as she learned the workings of the business. With a determined heart, she built her own business along with her husband Jose Ramos. The tides of time were not always on their side they had to rebuilt the NBS three times from scratch. If you do not consider this as true entrepreneurial spirit, I do not know what is!

The first NBS stall was situated in Escolta. It housed a collection of supplies, textbooks, and GI novels. Unfortunately, everything turned around when the Japanese invaded the land and the strict book censorship was enforced. They had to sell candies, slippers, and soaps instead.

The liberation brought one thing to Escolta – a rapid fire. NBS had to reopen after the war. The unpleasant events did not stop there as a typhoon destroyed their store in 1948. Their resilient hearts was not wavered. They pursued their dreams and rebuilt NBS once more.

Nanay Coring’s hand-on approach to her business gave the bookstore the low purchasing power and decent prices. Along with this power, she remained updated with the changing times. After numerous decades, NBS became an institution in the Filipino culture with a hundred branches scattered throughout the country.

Soccoro believes in the entrepreneur’s adaptability. One’s business will not flourish if the individual is not open to change.

5. From His Father’s Helper to a Country’s Philanthropist

This list will not be complete without the one and only, Mr. Shi ZhìChéng who is better known as Mr. Henry Sy, Sr. After bidding farewell to their impoverished lifestyle in China, Henry and his entire family relocated to the Philippines. Henry’s father was the owner of a thriving variety store in Manila in the ’30s.

He used to clear out the store’s counter and sleep in it afterwards. Unfortunately, their family store was burned down to the ground when the WWII came. Henry turned the war’s aftermath around by selling postwar goods such as the shoes of some G.I. Joes. G.I. Joe was the nickname given to all the American soldiers at that time.

His dedication for selling quality shoes grew and he founded the Philippine’s biggest retailing company known as SM. SM is an acronym for “Shoe Mart” – the name of the small shoe shop that he started in 1958.

Let me close this inspiring story by sharing one of his valuable nuggets: “There is no such thing as overnight success or easy money. If you fail, do not be discouraged; try again. When you do well, do not change your ways.”

That ends the round up! I hope that you may find a story or two that you can relate to. Immerse yourself with the lessons behind these stories and impart your knowledge to others. If you feel that you want to expand this list of inspiring entrepreneurs, please drop your opinions freely on the comment section below.