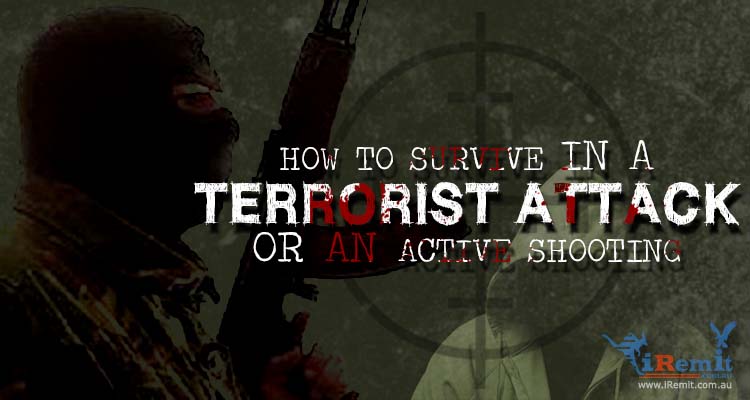 How to Survive in a Terrorist Attack or an Active Shooting

When I was a kid, we had fire drills. You know, the sort where the school’s fire alarm goes off in the middle of class and you and your classmates practice how to calmly and collectively file out of the room to an assigned assembly area?

But those were the days when a fire was the worst that could happen at one’s school or workplace. Today, another kind of catastrophe is becoming all too common: active shootings.

A couple of weeks ago, Maute insurgents descended upon Marawi, Lanao del Sur and unleashed terror upon the quiet little city. The gunfight between the alleged malcontents and Philippine soldiers escalated to terrifying heights and is still (!) ongoing.

Last Friday, a lone gunman somehow managed to break into Resorts World Manila, a swanky casino in Pasay City, firing shots off his assault rifle and even setting fire to gambling tables in the wee hours of the morning. About 37 dead bodies were found in the aftermath, not including the gunman’s own after he supposedly committed suicide by setting himself on fire.

And if you think migrating to an industrialized country in the West is safer, think again. The day after the Resorts World Manila shooting, the militant group ISIS claimed responsibility for a deadly terror attack on London Bridge (yes, as in the nursery rhyme) and Borough Market in England, UK. At least 7 citizens were killed in the onslaught, with many more critically injured. The event marked the third terror attack on the UK in the past three months, which is a sobering statistic by anyone’s standards.

Unlike storms or fire, active shootings cannot be predicted and they can happen at anytime and as the previous three events cited show, at any place in the world.

As we come to terms with this new reality, we should also bear in mind that we don’t have to be helpless victims just in case we find ourselves literally caught in a cross fire. So, how do you survive an active shooting?

1. Familiarize yourself with ALL the exits.

By ALL, I mean including the not-so-visible ones or those that you’ve been trained to ignore.

For example, most grocery stores and restaurants usually have exit doors in the back, specifically in the “employees only” areas. Because most active shooters typically favor a frontal attack, you’ll have a higher chance of survival if you use the back exits.

You should also know where the fire exits and maintenance exits are in your office or at your school. This knowledge just might save your life one day.

Most people tend to freeze up in an active shooter situation because they get scared or they let their normalcy bias (i.e., the mistaken belief that things will proceed as they are) take over.

Active shootings last a little over two minutes on average, so don’t assume that the authorities will arrive in time to save all of you. Once you hear that first gunshot, you’re pretty much on your own, so what should be your first move? Experts agree on three possible reactions, and here they are in descending order:

If you know of an escape route that will keep you at a safe distance from the shooter, your first instinct should be to run (provided you can do so safely).

Visualize your route and pay attention to your surroundings. One that can conceal you and provide protection from potential bullets is ideal, though you should also try to anticipate possible positions along the route where the shooter could potentially ambush you or others.

Remember, most active shooters choose their targets randomly, so avoid entering the gunman’s line of sight. The harder you are to see and hit, the safer you will be.

Should you meet other people along the way, you can get them to join you but don’t slow down for anyone who hesitates.

Lastly, leave your stuff behind. You can bring your mobile phone to contact the authorities once you’ve escaped, but I shouldn’t have to tell you that this isn’t the time for selfies or Snapchat. Keep your eyes on the route ahead and not on your mobile screen. You may also want to put your phone on silent mode, lest your phone rings or beeps and alerts the shooter as to your whereabouts.

If running is not an option (let’s say the shooter is near the only exit you know of and you’re on one of the higher floors), then by all means, hide.

Go for a place that will keep you out of the gunman’s view and can protect you in case shots are fired in your direction. If you’re in an office or a school, find a room with a lockable door. If you can’t find one, barricade the entrance with a desk, chairs, or cabinets. Again, active shooters look for easy victims, so they’re more likely to move on in search of easier prey rather than attempt to push through the barrier.

Don’t forget to turn off the lights in the room and to put your cell phone on silent mode so you don’t give yourself away. (Disable the vibrate function as well.)

Okay, this is the worst-case scenario (save for curling up in a fetal position and getting shot to death while you beg for mercy). If all else fails and if you’re trapped with a group of other people, you can fight off the shooter.

A gunman doesn’t expect anyone to charge at him since he’s armed, and powerful though his weapon might be, he can only shoot in one direction at a time. Take advantage of these vulnerable points.

If there’s a group of you stuck lying in wait, come at the attacker from different directions. Anything can be used as a weapon: chairs, umbrellas, belts, that ugly-ass mug your co-worker got you last Christmas (perfect for tossing at the shooter’s head as a distraction or for knocking him out if you’ve got a good aim), and even your pen. Be aggressive and relentless, and don’t stop hitting the gunman until he has stopped moving or unless you are dead.

You can also try to disarm the shooter or at least take hold of his weapon. Grabbing the barrel of a semi-automatic pistol, for instance, allows you to exert control over where it’s pointed and prevents it from going back and chambering another round in case it does go off.

If you were able to get away from the crime scene safely, dial 911 or your country’s equivalent for emergency services and inform them about what just happened. Don’t assume that someone has already done so, or the gunman could remain at large for much longer than he should be.

Many times, the world seems to be turning into a scary place. While that might be depressing to contemplate, we must also consider that humanity was built to survive. When faced with danger and tumult, we can always to choose to fight or flee, and perhaps even to save others in the process.