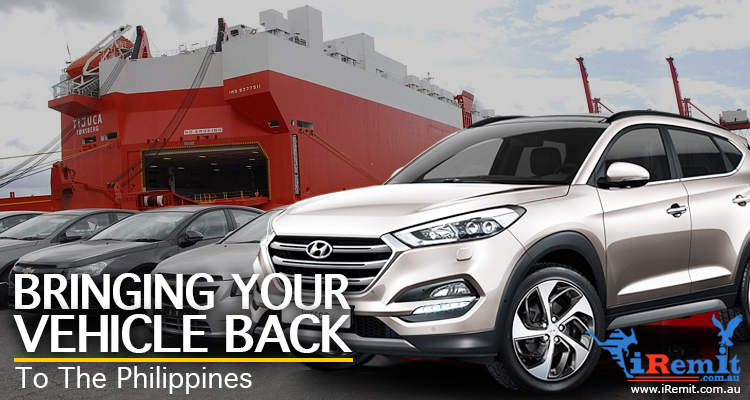 By Serena Estrella in Filipinos in Australia
January 13, 2017

How to Send Your Vehicles Back to the Philippines

Okay, so we’ve got good news and bad news.

The good news is that OFW’s can send their vehicles back home.

The bad news is that the process can be complicated and costly, BUT there are guidelines you can look to before you proceed:

1. You can bring in a motor vehicle from abroad, provided that it is brand-new.

As per Bangko Sentral ng Pilipinas (BSP) Circular 92, you won’t need prior authority to import any brand-new vehicles, including motorcycles.

To qualify as brand-new, the vehicle should:

a.) at least be of the current year model (advance models are also acceptable);

b.) have never been registered or used prior;

c.) be covered by a certificate of first ownership;

Vehicles that are of the immediate preceding year in the country of origin can also be imported without prior authority so long as they:

a.) do not have a mileage exceeding 50 kilometres;

b.) were acquired by their importer directly from the dealer as a first owner.

2. Used or non-current vehicles, on the other hand, are subject to a prior authority to import.

The importation of used vehicles is still regulated under the law, so you will need prior authorization from the Bureau of Import Services (BIS) and the Department of Trade and Industry (DTI).

Also, vehicles that don’t meet any of the criteria mentioned in the previous item are considered “used” and will be treated as such under import laws.

3. Most OFW’s are qualified to import used motor vehicles into the Philippines, as are a few select foreigners.

Returning residents (those who have stayed in a foreign country for at least a year and are returning to the Philippines for at least three years immediately following the date of their application to import the vehicle) and Filipino migrants in possession of 13G, 47A or 47A2 visas (the latter two issued to awardees of Special Government Projects like the Balik-Scientist Program) all qualify for this privilege.

Foreign nationals can also import vehicles if they are married to a Filipino and are holders of a 13A visa.

4. Apart from being brand-new, the vehicles that OFW’s mean to import also have to meet additional requirements, such as:

a.) A gross vehicle weight (GVW) not exceeding three (3) tons;

b.) Personally owned and registered under the name of a returning resident or immigrant at least six (6) months prior to the date of application for permit to import with the BIS;

c.) Meant for personal use;

d.) Cannot be resold for at least three (3) years.

e.) Should be left-hand drive (something that’s a bit of a challenge since Australian dealers typically sell, drive, and own right-hand drive cars).

6. Imported vehicles are subject to taxes, duties, and shipping charges.

This applies to ALL imported vehicles, whether they’re brand-new, used, purchased, or donated. The car’s book value (sourced from universally-accepted motor vehicle reference books) rather than its purchase price serves as the tax base for a 40% Customs duty, 10% value-added tax (VAT), and a 15-100% Ad Valorem tax (this one relies on the car’s piston displacement).

If you send any spare parts along with the vehicle, those are taxable too.

Shipping charges, on the other hand, include storage and arrastre fees (charged for receiving, loading, and unloading items on piers and wharves) as well as wharfage dues charged by the Philippine Port Authority (PPA).

7. Importing a vehicle that doesn’t qualify as brand-new without Prior Import Authority (PIA) results in expensive penalties.

Used motor vehicles without PIA are seized and held until their owners tender heavy penalties alongside the customs and taxes due such.

Should you want to inquire about about the taxes and duties concerning your vehicle, you can write to the following Manila addresses:

Be sure to provide information about your vehicle’s make, brand, piston displacement, year model, and VEHICLE IDENTIFICATION NUMBER (VIN) along with a copy of your vehicle registration to get a more accurate quote.