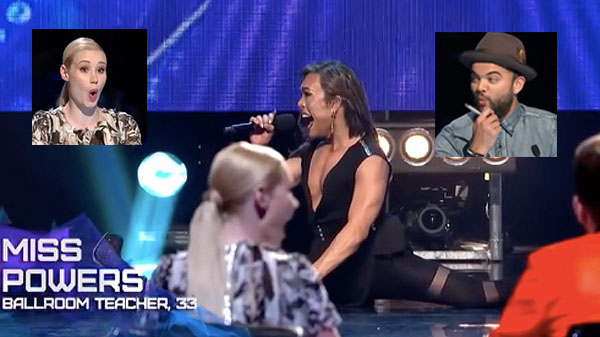 Before hitting the stage with his oozing confidence, Miss Powers told the X-Factor (Season 8) host Jason Dundas that makeup gives his energy. He did not disappoint when he faced the judges on last Monday’s episode!

Let me start by saying that Miss powers is a Ballroom Teacher who was born in the Philippines. The 33-year-old, whose given name is Andrew Mark Baris, wore a pair of sky-high stilettos. His eye-catching feasts does not stop there as his face sparkled with gold highlighter, dramatic smokey eyes, and dark lips. I was initially impressed with his make-up skills (and that highlighter that is to die for). But, I echoed the opinion of the judges when he started singing.

Miss Powers turned his back on the judges and showed several dance moves when his turn began. A moment later, he jumped into the splits and hit some bars. That is what I call a grand entrance! In fact, judge Guy Sebastian said that it was: “Hands down the best opening to any audition I’ve ever seen”.

Miss Powers amazed the three judges with his amplified version of James Brown’s It’s A Man’s World. After all, the judges did not know what to expect from the cross-dressing performer. Iggy Azalea was left speechless when he tried to verbalize the overwhelming performance of the contestant. Nonetheless, they all give their positive votes to secure his spot on the next round. He will be joining the likes of Naisa Lasalosi and Predz.

Miss Powers described himself as the “outside the box of a man and a woman” and he surely brought the best of best worlds in the audition.

Special thanks to Zeibiz for the main image.