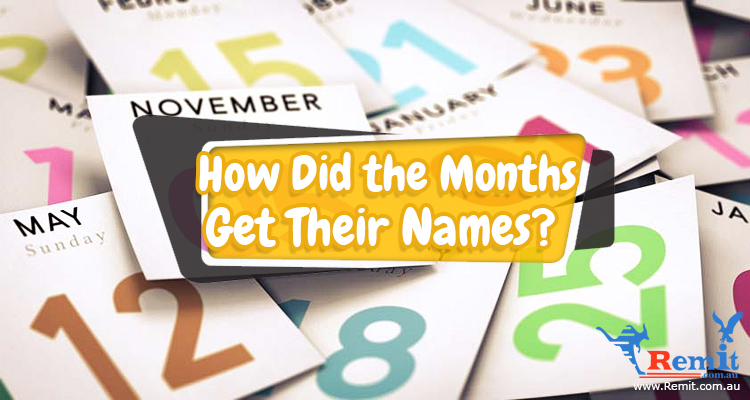 How Did The Months of the Year Get Their Names?

Calendars are one of the most mundane things out there. You can see them practically everywhere: on the walls, on people’s desks, and in your phone. Apart from checking the date or booking an appointment, you probably wouldn’t give much thought to them.

If you give your calendar a second look, however, you might be intrigued by how the months within originated. And let me tell you, the stories are every bit as interesting as the one behind February’s 28 days.

Janus was the Roman god with two faces. One face looked to the future, while the other looked to the past. He was also the deity reigning over doorways, gates, and transitions.

When the Romans added two months to their ten-month calendar, naming the first month after someone who could represent the transition between the previous year and the next made a lot of sense.

If you read our aforementioned article, you probably know that the second month takes its name from “februa.” This refers to a purification festival meant to banish evil spirits from Rome.

Fun fact: While a Roman February sounds morbid, they did have another festival that laid the foundation for Valentine’s Day. Intrigued? Check out our article on Lupercalia.

So, which god did the Romans want to appease the most at this time? None other than Mars, the god of war, of course.

There are two theories concerning April’s origins. One credits “aperire,” a Latin word which means “to open.” Considering how flowers tend to flourish in the spring, this sounds appropriate.

The other story invokes the goddess of love and beauty herself. The Romans called her Venus, but she was originally called Aphrodite. What could be more beautiful and romantic than spring in full bloom?

Here, we have another month that honors a Greek goddess. Maia, the goddess of the earth, was known for her nurturing and profuse nature. Hence, the Romans associated her with this warm, plentiful season.

Ovid, the Roman poet, offered another suggestion. He proposed that May was derived from the Latin “maiores,” which means “the elders.” This supposedly contrasts with the Latin term corresponding to the following month.

Like April and May, June also has a powerful goddess behind it. The midsummer months were particularly important to the Romans, so they named it after Jupiter’s wife: Juno.

Fun fact: Juno was also the goddess of marriage. This is how June came to be known as “wedding month.”

Okay, so July was named after a mortal, but one of history’s greats nonetheless.

Julius Caesar wasn’t just a legendary general. He was also the brains behind reforming the calendar, among other things. After he was assassinated, the Romans deemed it only fitting to name an entire month after him. They then renamed Quintilis, originally the fifth month (and Caesar’s birth month, coincidentally) as “July.”

Not to be outdone, Julius Caesar’s successor also had a month named after him. His birth name was Octavian, but he changed his name after he rose to power.

Rome’s first emperor chose the name “Augustus,” which means “consecrated” or “venerable.” The eight month was called “August” in his honor.

The “ber” months have a less exalted etymology. In lieu of mythical beings, their numerical order in the old calendar determined their names.

A tumblr joke actually pokes fun at the displacement: 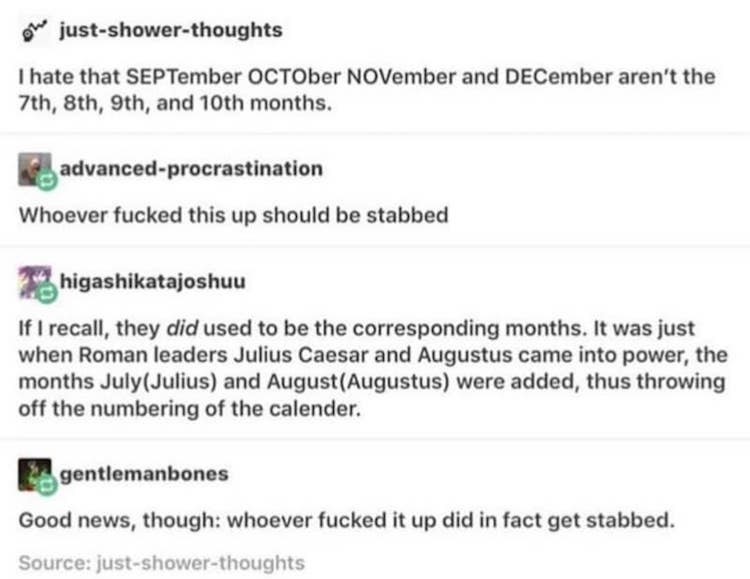 Hehehe. Get it? Okay, never mind.

The Roman Empire has been gone for thousands of years. Yet, its influence is keenly felt in so many ways today. The Roman calendar is but one example of this, clearly.

Just goes to show that while the future is full of promising developments, occasionally looking back at our history is no less valuable or fulfilling.