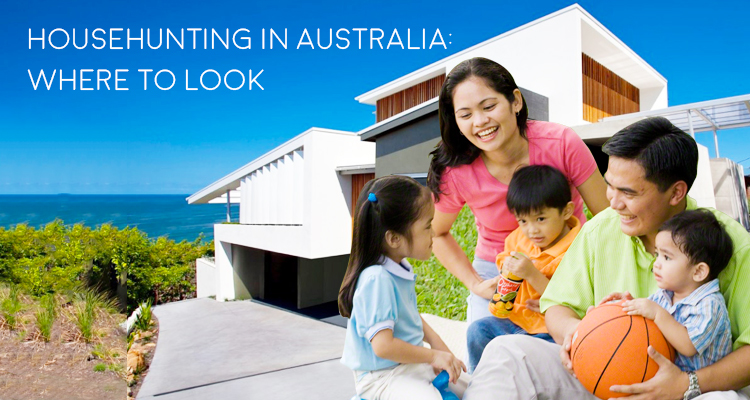 By Serena Estrella in Filipinos in Australia
June 21, 2016

Househunting in Australia: Where to Look

Buying a house is symbolic to many people. Not only does it indicate reaching a certain financial milestone (a house is one of the biggest purchases or investments that you can make, after all), but for expats, buying a home in Australia also means that they have decided to put down roots here.

If you are a Filipino, for instance, and you’ve managed to save up enough to at least pay for a down payment on a house, looking for properties for sale can make you feel both nervous and excited. On the one hand, the thought of owning your own place in one of the most prosperous nations in the world can fill you with a sense of accomplishment. On the other hand, you are anxious to acquire a house in the right neighborhood, especially since the global property economy has been so unpredictable recently.

Related post: The Basics in Owning a House in Australia

So, where should you start looking? It all depends on your purpose, really. Are you buying a house for you and your family to live in, or do you plan to lease it out? For this article’s purposes, let’s say that you plan to live in the house first and then have tenants rent it once you are able to upgrade to a different property. While it might seem impossible for anyone but Manny Pacquiao to buy a house in Melbourne or Sydney given the escalating property costs, you can still find a bargain if you look hard enough:

A suburb of Sydney, Liverpool is about 40 kilometers from the major city’s pricey Central Business District (CBD). It’s still accessible if you happen to work in Sydney, and the average house in this area costs around AU$500,000, which is quite reasonable compared to the median AU$807,500 price tag for a house in Sydney’s CBD.

The construction of an airport in nearby Badgerys Creek is also sure to bring in an influx of employment opportunities for Liverpool residents.

As one of the oldest urban settlements in Australia, Liverpool is home to several shopping areas, hospitals, schools, churches, and railway stations. The local railway station, meanwhile, is equipped to bring you into Sydney’s CBD or to Campbelltown.

Do note that Liverpool’s weather is a bit more humid than Sydney CBD’s, but that nights here are also significantly cooler.

Right between Brisbane and the Gold Coast, this Logan City suburb’s property market is as friendly to first-time homeowners as Liverpool’s. Eagleby also has its own post office as well as a state school and a local pub. Major shopping centers are nearby, and environmentally-conscious homeowners will be thrilled to know that there’s a waste water treatment plant in the area that processes water in three stages prior to releasing it in the Albert River.

And because of recent infrastructure developments in Logan City, real estate values are also likely to rise within the next five years, making the purchase of a house here a potentially good investment as well.

Lastly, potential Filipino homeowners might be pleased to learn that there is also a FIlipino community here, as 0.8% of the registered population speaks Tagalog at home.

Narara is about 4 kilometers north of Gosford’s Central Business District and is part of the City of Gosford local government area.

The median selling price of the houses being sold in this area is around AU$531,650, and this residential suburb is complete with facilities like the Narara railway station along with parks, sporting grounds, and even a private Christian school (St. Philips Christian College Gosford) educating kids from kindergarten to year twelve.

Related post: 10 Easy Steps in Buying a House If You’re in NSW

Located 32 kilometers south-west of Melbourne’s Central Business District, Werribee is part of the Greater Melbourne metropolitan area. This Melbourne suburb’s charm lies greatly in its strategic destination between Melbourne and Geelong as well as its being situated on the Werribee River.

Werribee’s median property price for houses on sale is quite impressive at AU$345,000. However, that price is bound to go up given how this waterfront enclave’s marina development has been evolving over the past few years. Another quality that makes this area so attractive to many first-time homeowners is that it is also very family-friendly. There are numerous public, private, and Catholic schools, hospitals like Werribee Mercy Hospital that provide maternal and mental health care services, and even bike paths and bike lanes.

There are also two major railway stations in the area, namely Werribee Railway Station and Hoppers Crossing Railway Station, so commuting to Melbourne via the metropolitan network is highly doable.

Much like Liverpool, Salisbury is one of the older settlements in Australia and it remained rather rural until after the Second World War because of its relative remoteness. These days, however, it’s both a residential and industrial area, with local shops, schools, care home facilities for the aged, and sporting facilities available to its residents. The Salisbury Campus of SkillsTech Australia, The Construction Training Center, Toohey Forest, and Toohey Mountain are also key locations within this Brisbane suburb.

The median property price of houses for sale in this area is currently at AU$537,000, but that is bound to increase since many families have been moving to Salisbury in the recent areas.