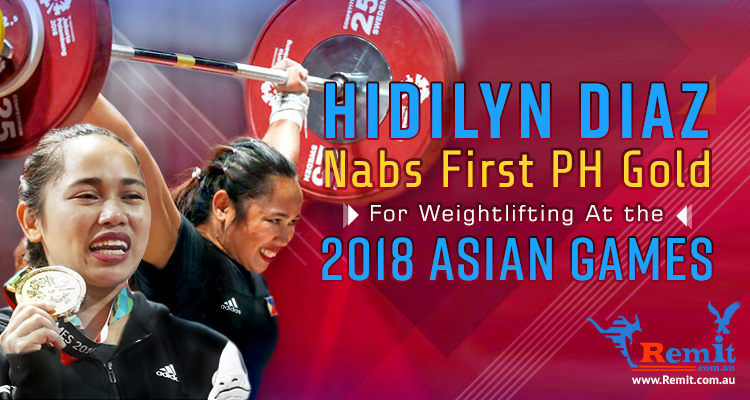 Hidilyn Diaz is on a roll.

Back in 2016, she ended the Philippines’ 20-year Olympic drought when she brought home the silver medal for the women’s 53-kg weightlifting event back in Rio. And now, nearly two years to the day, she has given the country its first gold medal at the ongoing 2018 Asian Games.

Diaz claimed the top spot within the same category in the weightlifting competition at the Jakarta International Expo Hall A in Indonesia last Tuesday, lifting a total of 207 kg at the event and beating out Turkmenistan’s Kristina Shermetova and Thailand’s Surodchana Khambao, who lifted a total of 206 kg and 201 kg, respectively.

The 27 year-old’s win didn’t come easy, however. Her main rival, Shermetova, led in the snatch with 93 kg, edging out Diaz’s 92 kg. The latter rallied at the clean and jerk event, clearing the 115 kg on her second lift and nabbing the gold medal when Shermetova failed to clear 116 kg.

The Philippines has had a total of eight medals in weightlifting prior to Diaz’s feat, but she is the first Filipino athlete to seize the top spot for the sport at the Asian Games. Once the competition is concluded, the weightlifter plans to continue her studies at the College of St. Benilde. She will also begin qualifying for the 2020 Tokyo Olympics, starting with the World Weightlifting Championships in Turkmenistan this November.

“I think this is my stepping stone for the 2020 Tokyo Olympics and I’ll do everything to make it to my last Olympics,” Diaz was quoted saying, “We once again showed that we can be champions in weightlifting.”

Diaz memorably used her prize money from the last Summer Olympics to build a weightlifting gym in her native Zamboanga, and intends to give part of her recent windfall to her mother, her coaches, and her church. The rest, she says, will be used to set up a business and/or other investments.

Hopefully, whoever designed the pitiful logo for the 2019 SEA Games will take a leaf out of Ms. Diaz’s book and come up with something that will actually bring glory to the country when it hosts the said event next year.