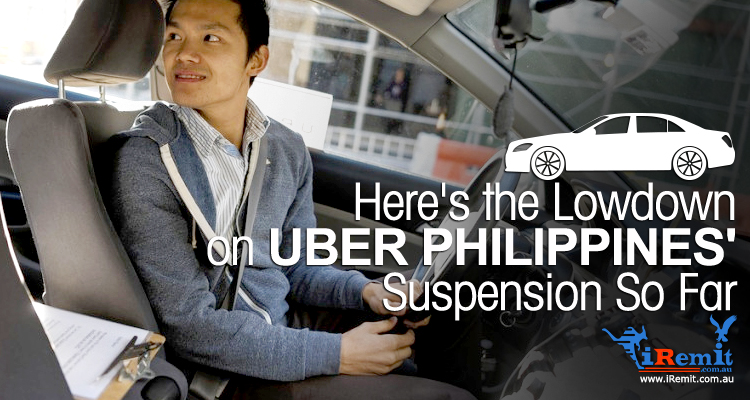 Here’s the Lowdown on Uber Philippines’ Suspension So Far

I remember my own pre-Uber and pre-Grab struggles. Whenever I had to commute somewhere, I’d have a 70-30 chance of hailing a cab on the first try, with the odds against. If it was raining hard and I happened to have a sack of 80 client’s uniforms with me for urgent delivery, I had to agree to the additional Php100 on top of the metered fare or else get drenched and stranded.

And then, there was always the threat of getting raped, robbed, murdered, or all of the above once you got into a taxi.

So, when ride-sharing arrived in the Philippines, it felt like a godsend. Finally, majority of the urban population now had a safer and more convenient means for getting around. From my experience, Uber/Grab cars are clean and well-maintained, its drivers are polite and sometimes even friendly, and any grievances with the system or its participants are quickly dealt with by their respective companies. Furthermore, the Uber/Grab business model allowed senior citizens, working students, and even OFW’s to leverage their savings into a vehicle that earned them a tidy bit of profit.

Until now, it seems. Barely a week ago, Uber had to suspend its operations in compliance with an order from the Land Transport and Franchising and Regulatory Board (LTFRB), which called for the multinational ride-sharing giant to cease its operations in the Philippines for one month.

Why is the LTFRB Going After Ride-Sharing Companies Like Grab and Uber?

Last year, the transportation agency imposed a moratorium on the processing of new applications for ride-sharing services such as Uber and its Southeast Asian competition, Grab. This measure was primarily meant to check the growth of both companies while the government worked out how to regulate this revolutionary sort of transportation.

How Come Uber Was the Only Company Suspended?

Regulators claim that Grab eventually followed the directive, and thus did not accept new applications, but its rival flouted the restriction by continuing to do just that. Other transport groups thus accused Uber of acting “above the law,” so the concerned agency issued the suspension to hold them accountable.

Uber, however, claimed that they were merely accepting the applications but were not processing them in compliance with the order.

What Is Uber Doing to Try and Reverse This?

At first, Uber tried to defy the suspension order by lodging an appeal with the transportation agency, but was made to reverse this once the LTFRB immediately rejected the appeal and called for the apprehension of Uber drivers operating on the road.

Two days later, the company filed a second appeal offering to pay a penalty of Php10 million in lieu of a 1-month suspension to “ease the toll on the Filipino rider and driver community” in addition to the Php5 million fine levied on both Grab and Uber for defying the moratorium on accrediting new drivers.

What About the Drivers on Uber’s Platform?

As the suspension affects 66,000 Uber drivers who ply the roads either full-time or part-time for a living (some of which include migrant workers who have invested considerable savings into this venture), the LTFRB allowed and encouraged them to transfer to other ride-sharing companies like Grab and UHop for the meantime.

The embattled company also appears to be giving its drivers financial assistance, though the amounts allegedly vary per driver based on their average daily earnings back when the app was operational.

So, What Happens Now?

Uber has apologized for any misunderstandings prior, promising to comply with Philippine laws from here on out. As of this writing, the LTFRB is set to conduct a hearing on Wednesday, 23 August to deliberate Uber’s new request to lift the suspension in exchange for a hefty penalty.

Because its technology is so disruptive (in both good ways and bad), ride-sharing models like Uber have always been a pain in the ass to regulate. Its history of flouting laws and restrictions and its own seemingly problematic internal culture has also raised eyebrows, and justifiably so.

However, whichever side of the debate you identify with, it can’t be denied that ride-sharing has effectively addressed the plight of many commuters in a way that no government measure ever has. For now, the rest of us mortals who have no access to private helicopters or an entourage of cars equipped with blaring, blinking sirens can only hope against hope that things will get better moving forward as opposed to regressing into that special kind of misery that is trying to hail a cab on a stormy Friday along with what feels like hundreds of other people once things get settled.