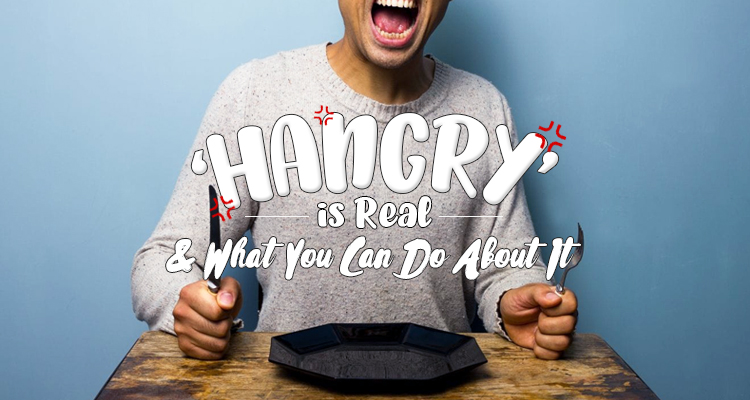 By Leandro Eclipse in Health and Fitness
July 20, 2018

‘Hangry’ is Real and What You Can Do About It

With a long day ahead, have you experienced being so irritated at everything when you skipped breakfast? You road rage in traffic. You complain about the economy. You even call out people for wearing those harmless statement shirts.

Similar to women in their time of the month, you are just plain angry. Or should I say ‘Hangry’?

I kid you not. Hangry is real. It’s an amalgamation of Hungry and Angry. The irritable feeling caused by your hungriness. And it’s not even a colloquial term anymore. It’s now an official word listed in the Oxford English Dictionary.

But come to think of it, why do we even get Hangry? Here is what I found out.

It’s all in the brain. Our brain restrains us from doing aggressive and violent actions. That’s the reason you don’t punch someone you hate at a whim.

It manages our self-control. In a study, they found out that this self-control is fueled by a large amount of glucose. When we eat, carbohydrates are broken down into simple sugars. And glucose (one of these simple sugars) is abundant in the bloodstream after your hearty meal.

But the glucose levels go down throughout the day. The drop makes the brain signal multiple defense mechanisms to get more glucose. Making us hungry again.

In fact, there are four hormones that regulate glucose. The growth hormone from the pituitary gland, glucagon from the pancreas, and adrenaline (epinephrine and cortisol) from the adrenal glands.

And the culprit of our irritation? The adrenaline of course. This hormone is not only produced for the hungry, but also in life-threatening situations. It activates your fight or flight reflexes. So imagine being threatened by a wild bear in the outback. And look at your hungry self in the mirror. Similar, right?

And Our Genes as well…

And the brain is not the only one to be blamed. This annoyance is deeply ingrained in our genes as well. The protein called neuropeptide Y is produced when we are hungry. The production of this hormone makes our anger and aggression go haywire.

Hunger is a survival mechanism probably to preserve their race due to food shortage. I mean, you don’t happily compete with other creatures to survive. You show who’s boss. You establish dominion by showing your strength and aggression.

But in our world today, it’s not exactly necessary. So how do you minimize this hanger?

Obviously, the first way to avoid hanger is to eat! Yes! Why didn’t I think of that?

If you can, bring snacks with you. That’s a major savior. But try to avoid the unhealthy ones. Chocolate or those with high sugar will certainly curb your hunger and glucose levels. But you will be punished later when you crash down from the sugar rush.

If you can’t actually eat right now, better forego mentally and emotionally draining task for later. At this stage, your cognitive level is not at its prime. You are prone to making mistakes. And errors made might leave you frustrated and hangry.

And that goes double on emotionally draining tasks. At this moment, we are easily swayed by our emotions. You might regret your sudden word lashing at your team meeting. So, wait until you eat first.

All About Awareness: Make the Environment Positive

But the main thing we should have is awareness. It really helps that you are aware that you are just hungry. Period.

Most of the time, the outbursts happen because the person is faced with a toxic condition and just disregards their hunger. There is even a study that hangry people just manifests this hostility in a negative situation.

So if you are knowledgeable, you can adjust by making your environment more positive. Like listening to music that makes you happy. Browse funny memes on the Internet. Ultimately, this awareness lets you have the ability to step back and assess the situation before going all-out ballistic.

Today, it’s just a simple case of “it’s not you, it’s just my stomach.” Hopefully.