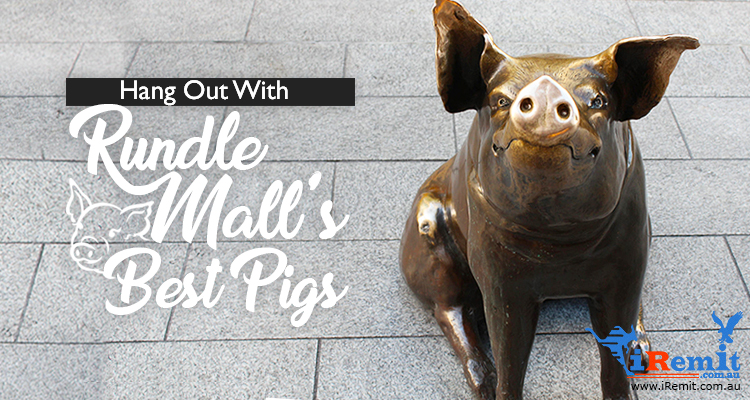 By Serena Estrella in Life in Australia
March 15, 2017

Hang Out With the Best Pigs in Australia

Leave it to the Aussies to go to the mall just to gape at pigs.

First unveiled in 1999, this quartet of bronze pigs was the winning entry in a sculpture competition held by the Adelaide City Council during the final stage of the Rundle Mall upgrade in the 90’s. True to Australia’s multicultural movement, the Rundle Mall pigs were the work of a South African-born sculptor who migrated to Sydney.

Marguerite Derricourt called her winning creation “A Day Out” and credited her inspiration to a certain Il Porcellino (Italian for “the piglet”)  in Florence, Italy. The said sculpture is of a formidable boar, and was crafted in the same material as Derricourt’s pigs. When asked why she chose to feature pigs for her entry, the artist explained that she was “captivated by their shapes and rounded forms, especially when created in a beautiful and enduring material like bronze.”

The public absolutely fell in love with the pigs at first sight, and a second competition was held to name each member of the group. Today, a plaque stands beside each pig, bearing the animal’s name (as well as of the person who provided it).

The pig sitting happily with its hefty rump on the pavement was christened “Horatio” by Jenny Bridges and Dorothy Arnold named the pig on all fours “Augusta.”

The pig sniffing around was aptly named “Truffles” (presumably after the prized black fungus that can only be found by, you guessed it, pigs) while the one poking his snout into a rubbish bin has since been referred to as “Oliver,” thanks to a Ms. Sarah Chan.

Beautifully-sculpted, life-sized, and astonishingly lifelike, the Rundle Pigs are a much-loved public attraction, as evidenced by how shiny their snouts are (well, yours would be too if little children kept rubbing their sleeves on it all day, every day). They even have their own review page on Tripadvisor, with many contributors recommending stopping by for a photo or perhaps a cuddle with these bronzed beauties. Some children even hop onto the pigs’ backs for a ride!

This is why Rundle Mall’s visitors panicked back in 2014 when the pigs disappeared one morning. Fortunately, Truffles, Horatio, Oliver, and Augusta were merely airlifted (Pigs flying!!! Get it?? Erm, never mind.) the night before for a “well-deserved rest and feed by expert pig minders” (i.e., restored and polished by expert artists).

All four pigs were returned in all their freshly-buffed glory later that year, and as of press time, continue to give much joy to the kids and the kids at heart roaming around the mall.