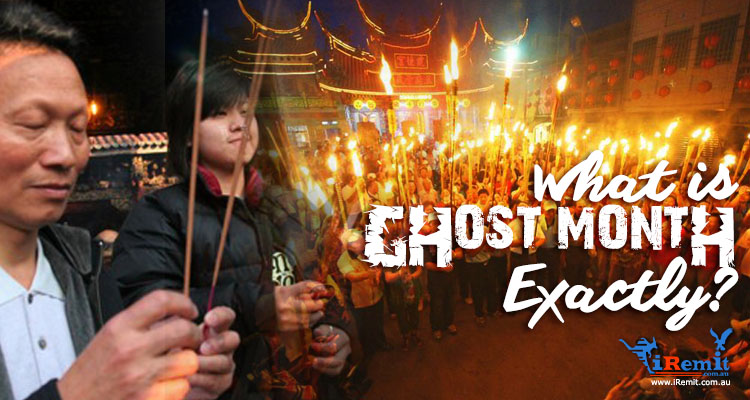 What is Ghost Month Exactly?

“Mahina kami tuwing August. Ghost month kasi. (Our sales aren’t too good during August because it’s ghost month.)” You may have heard something to that effect if you’ve gone to a salon, restaurant, or clothing shop in the Philippines during the eighth month of the year. Granted, we Filipinos are a superstitious lot to begin with, but even we are puzzled by this practice that seems to cripple our Chinese brothers and sisters for an entire month, affecting even the Philippine Stock Exchange.

But wait, what exactly is Ghost Month and how do you survive it?

“Ghost Month” is the name given to the period that starts on the Hungry Ghost Festival, which takes place on the fifteenth night of the seventh month on the Chinese lunisolar calendar. Buddhists believe that the festival began when a monk who achieved enlightenment decided to check on his parents in the afterlife. He found his father in the heavenly realms (i.e., the realm of the gods), but his mother ended up in hell as a hungry ghost, so called because it has an extremely thin and fragile throat through which no food could pass through. The monk then asked Buddha how he could help his mother’s soul leave hell and be reincarnated as a human once more, so he was instructed to offer food and hold rituals that would honor one’s deceased ancestors.

Since then, the Chinese believe that on this day, the gates of Heaven and Hell open onto the realm of the living and that the spirits entrapped within are free to roam the earth for about a month.

What to Avoid During Ghost Month

Because it’s believed that there are more spirits roaming around during ghost month, people are advised to avoid attracting unwanted attention from wandering spirits, lest they bring misery upon you and your endeavors. Should you want to play it safe, here are eight of the things you should steer clear off until the 19th of next month, when this year’s Ghost Month officially comes to an end:

Long trips that require you to cross oceans or skies are apparently a no-no, especially if your itinerary includes a visit to the beach.

Why? Hungry ghosts are supposedly attracted to bodies of water (being thirsty and hungry often go hand in hand, after all), and there are plenty of spirits in these areas from all those who died by drowning in the past. The latter are even said to seek revenge on living swimmers by drowning them so that their soul can take their place, allowing them to get reincarnated.

Should you be some sort of swimsuit model who can’t avoid the beach during Ghost Month, experts recommend leaving the water as soon as it gets dark since this supposedly attracts spirits, which brings us to….

2. Dim lighting in houses and offices.

Yin energy from the moon is said to fuel ghosts who dwell in dark and poorly-lit areas, so it’s very important to keep your home or office bright during Ghost Month. This supposedly scares away any spirits lurking in the dark too, so be sure to replace any broken light bulbs ASAP.

3. Telling ghost stories and playing games like “Spirit of the Glass.”

Spirits are said to seek out the mention of their names, so unless you want to bring on an Annabelle sort of scenario, best save the scary stories and the Ouija board for a more auspicious month.

4. Making big purchases such as a house or a car.

You’d think only the living are prone to fits of envy, right? Wrong. It’s believed that big-ticket purchases like houses or cars arouse jealousy among wandering spirits, so you should hold off on these until the end of Ghost month, lest your new possession be cursed, so to speak.

As with getting injured on Holy Friday, there’s this belief that patients who get operated on during Ghost Month take longer to recover than they should. Perhaps those who urgently need a new kidney or liver have no choice, but if you’ve got aspirations of looking like the next K-Pop or K-drama star, you may want to postpone your visit to Dr. Belo’s clinic.

6. Saying “yes” to a suitor or proposing to someone.

Wandering ghosts are known to show up as uninvited guests to momentous occasions like engagements, weddings, or baptisms, and they tend to do a Maleficent and curse the celebrants when they do. (#SelosIsForever. Go figure.)

7. Starting a new business or investing.

Most global fund managers from Europe or the US take their annual vacations during this time of year precisely because of Ghost Month. Their Chinese clients and counterparts tend to halt trading or investing in the market to avoid bad luck, so the lack of activity leads to a downwards or sideways movement.

8. Moving to a different address or commencing construction or renovations.

Drilling or construction noises are apparently very enticing to lost souls, and they also like to occupy spaces left behind by furniture that’s been moved around, so if you’d like to avoid misfortune, stick to minor repairs and consider changing addresses at least a month later.

With all the restrictions listed above, you might be thinking that perhaps the only way to truly survive Ghost Month is to barricade yourself inside your room, hide under the covers, and sleep until it’s all over. Well, you might be right, but we can also look at Ghost Month as an opportunity to take a breather.  When you’re not preoccupied with closing business deals, jetting off every other weekend, or construction work, you may just find the time to reflect on your life and find a myriad of things to thank God and/or your dearly departed loved ones for, no?

So, when you come to see it from that perspective, Ghost Month may no longer seem terrifying or dreadful.