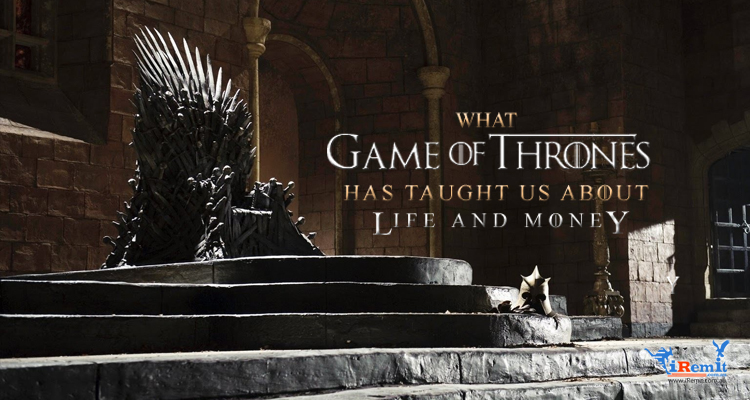 What Game of Thrones Has Taught Us About Life and Money

Unfortunately, the beloved HBO fantasy series will be airing the next season more than a year from now, and this will also be its last. Boo-hoo. In the meantime, fans will have to content themselves with theories about what G.R.R. Martin’s endgame will be, and how this will be interpreted on the small screen.

But since our blog is primarily focused on managing finances and surviving life in general, let’s talk about the lessons the epic television show has taught us about either instead:

The Lannister family’s official motto is actually “Hear Me Roar,” but they’re also known for another saying: “Lannisters Always Pay Their Debts.”

Because Robert Baratheon lived so recklessly and lavishly, his widow and his kingdom were left with a debt of 6 million gold dragons to the Iron Bank of Braavos. Cersei’s decision to default led to the Bank threatening to bankroll those who sought to take her throne, forcing her to seize Highgarden from the Tyrells in a move to raise the funds.

When you’ve got Casterly Rock’s gold mines at your disposal, it’s easy to get cocky and think you are financially untouchable, but debts left unchecked can wreak havoc on fortunes big and small. You don’t need to sack an entire kingdom to get rid of your debts, but you should do all you can to ensure they’re paid on time, else you might end up in hot water once the creditors come calling.

It also helps to learn the difference between good debts, such as loans used to set up a business (or in Cersei’s case, to fund a massive army to protect her kingdom), and bad debts, such as credit card charges for yet another trip to Boracay or to the wine taverns of Westeros. The latter could only lead to financial ruin, but the former could help you build an empire for generations to come.

2. It’s never too early to plan for retirement.

Image Credit: Watchers on the Wall

Even the most casual Game of Thrones fan is familiar with House Stark’s words: “Winter is coming.” It’s not exactly the clearest advice out there, but it has a rather profound meaning.

In the series, Ned Stark always tells his children that northerners are taught to prepare for a hard winter regardless of how long the summer might seem. Winterfell might be the biggest of all the Seven Kingdoms, but they are also closest to the North, and thus have borne the brunt of many endless winters where people starved to death from the lack of a harvest.

We might not have snow in the Philippines, but all of us will experience winter towards the end of our lifetimes. It’s called retirement, and it usually happens when we hit old age and can no longer work as much as we used to do. At this point, the harvest that we refer to as “payday” often ceases to arrive altogether. If we don’t prepare by saving up and investing properly, we could very well starve during our winter years, which often arrive much sooner than we might expect.

3. Prepare your kids for the future.

Raise your hand if you hated Joffrey Baratheon. Whether it was because he was the product of incest or because he was encouraged to do whatever he wanted from day one, King Robert’s golden-haired heir was notorious for being a sadistic spoiled brat who used prostitutes as crossbow targets, cowardly retreated from battle when his men needed him the most, and stubbornly refused to listen to wise, experienced advisors like his Uncle Tyrion.

As a result, he was poisoned by his bride’s grandmother, the OG bada** Lady Olenna Tyrell, at his own wedding. As you can imagine, his mother was the only person who mourned his mercifully short reign.

OFW’s want the best for their children, obviously. Why else would they sacrifice being by their side for the sake of giving them a better future by working abroad? However, that’s not an excuse for stinting on discipline.

For instance, rather than buying them the latest gadget whenever it comes out, why not give them a fixed allowance so they can learn to save up for what they want? That way, they’ll learn the values of patience and delayed gratification, thus equipping them to be well-adjusted adults able to handle bigger responsibilities later on.

4. If you want to achieve bigger goals, you’ll need to grow into a bigger person.

Ah, Daenerys Targaryen. The silken-haired Mother of Dragons might be small in stature, but if height reflected personal growth, she’d probably be as huge as Drogon by now.

From being her brother’s timid little pawn in securing an alliance with the Dothraki to becoming Daenerys Stormborn of the House Targaryen, First of Her Name, the Unburnt, Queen of the Andals and the First Men, Khaleesi of the Great Grass Sea, Breaker of Chains, and Mother of Dragons (whew), my personal bet for the Ruler of All Westeros has certainly come a long way, all seven seasons to be exact.

When we first met Dany in Season 1, she was a frightful little thing who wanted nothing more than to go home. Penniless and constantly being bullied by her brother, she didn’t look like someone who could be in the running for the Iron Throne. Yet as she gradually came to know herself better, a stronger personality emerged, so much so that she eventually managed to wrap her fierce Dothraki husband around her little finger, stand by unflinchingly when he executed her brother for his disrespect, found the strength to lead a Dothraki army, and single-handedly abolished the slave trade.

Every achiever in history wasn’t born successful. They had to work at it by constantly improving upon themselves and learning from their mistakes. It’s hard and there are no shortcuts, but if we’re willing to do whatever it takes to become the person our goals require us to be, even we might be surprised at where the journey will take us.

5. Wealth-building is a long game.

Petyr Baelish is far from being the most ethical character in GoT, but there’s no denying his shrewd mind. Littlefinger, as he was called, was initially dismissed by all for his puny height and humble lineage, but he steadily rose to become the realm’s Master of Coin and well, premier brothel owner, ensuring his own vast wealth and power.

(Okay, so Arya cut his throat open last season, but let’s focus on the positive side here, shall we?)

The takeaway here is that long-term financial success takes time, and most importantly, strategic planning.

“Game of Thrones” is so captivating, not only due to its intriguing storylines rife with savage, glorious battles, graphic depictions of lust, and ingenious political maneuverings, but also because the characters faced struggles that we’re all too familiar with. Which of us have never experienced money problems or have had to face off against a rival or even a family member, right?

And fictional as the show might be, it shows us that while monsters might lurk in different forms in their world or in ours, they can certainly be overcome.