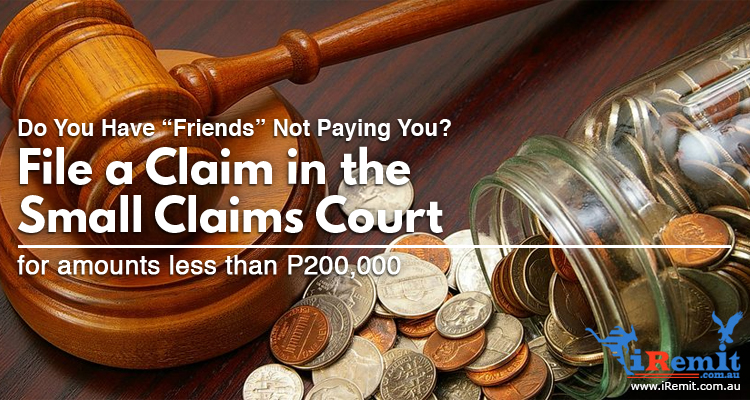 Do You Have “Friends” Not Paying You? File a Claim in the Small Claims Court for amounts less than P200,000

Do you have this friend or relative who is in dire need? You are just minding your business the whole day with your own headaches and all. Suddenly, a ping in messenger startled your already problematic day.

“Do you have some cash I can borrow? I need it for an emergency.” accompanied by all this melancholic narration. *Cue sorrowful music*

And as a considerate and loving human being, you offered your help. You gave in. But it’s worth it. A gleam of brightness bequeaths your gloomy day knowing that you have saved a friend from a difficult situation.

Well, that’s until s/he “forgets” to pay your hard earned money for so long. Even with repeated reminders, you just get countless of broken promises. Or worse, a seen-zoned message. It’s even more heartbreaking than your crush not responding to you.

I mean, it’s as if you hadn’t helped him/her when s/he was on a tight spot. If you can afford that new iPhone X your flaunting in social media, I think you can afford to pay me, right?

Fret not, your money has its last stand. If you can’t do anything nice anymore to recoup your money, demand your money with the help of the small claims court!

Justice in the Philippines isn’t exactly the fastest. So many cases are filed every day only to be pending for so long. Don’t forget the financial burden for the plaintiff (the one who files for legal action).

With this predicament, the judiciary system separated a court for purely civil cases to hasten small claims amounting up to P200,000. And surprisingly, it’s been here since 2010!

But take note, this can only be used ONLY FOR MONEY OWED arising from:

The P200,000 should already include interests and penalty fees if any.

The difference between small claims and ordinary civil cases are simpler forms and proceedings, cheaper fees, and faster resolution.

The filing fee for difference can be as follows:

Not to mention that YOU DON’T NEED LAWYERS in a small claims court. That alone saves so much money. And if you can’t afford the filing fee, you can file a “motion to plead for indigent”. But a PHP 1,000 service fee for the summons is mandatory for all.

Moreover, the proceedings are conducted in a somewhat informal way so that people can represent themselves. You just have to pass a few pre-drafted forms.

Afterward, the court will examine if your case can push thru or dismissed. If yes, wait for your case to be drawn by a judge. If the court finds merit to the case, a summon will be sent to the defendant which includes a notice of hearing, response form, and schedule of hearing.

Delays by any of the parties aren’t allowed unless there are circumstances that render a party virtually impossible to appear in person.

The defendant is given a maximum of 10 days to respond to the summons.

Furthermore, the result of your legal battle will be out in just 24-hours. The resolution is definitely faster. Although, the results are not appealable. It’s final and executory.

So, are you ready to file one? Here are the steps.

First, File the Case on a First Level Court

Small Claims are filed on either the first level courts nearest where the plaintiff resides or where the defendant resides.

If you don’t know where the courts near you are, try Find Justice PH App. It has a directory of all the courts in the Philippines. And it is constantly updated for the utmost accuracy.

Next, Fill up the Forms and Attach the Evidences

The Forms are obtainable in the office of the clerk of court. The following forms are needed:

You need two copies for each.

Attach the Evidences with the Forms

Now, you have to prove to the court that your former friend had debt owed to you. These can be:

In the Philippines, oral contracts are generally enforceable as long as the surrounding circumstances constitute to a contract. But the burden of proof is harder because of our country’s legal framework.

Generally, the important thing is the evidences should establish most of the following:

Note that No Evidence Should be allowed during the hearing which was not attached or submitted together with the statement of claim unless good cause is shown for the admission of additional evidence.

What if You Only Have Facebook or Text Messages?

In this digital age, deals can be made online and the money can be sent over an app or a web browser. We are faced with a very timely question. Can you use Facebook or text messages as evidence? Are social media posts admissible in evidence?

Based on the E-Commerce Act of 2000 (ECA) and the Rules on Electronic Evidence (REE), an electronic document is considered the functional equivalent of a paper-based document and should not be discriminated against as evidence solely on the ground that it is not in the standard paper form.

It can be used as evidence not only in a civil case but also in a criminal case. But again, the burden of proof is with the plaintiff.

However, isn’t that the case for all evidences? You MIGHT be able to use it as evidence. It’s best to ask a lawyer for clarification.

After everything, you just need to pay the filing fees (if applicable) and your good to go.

For more information, you can watch the Supreme Court’s information video, check their brochure, or read the revised rules of procedure for small claims cases.

With that, I hope you get your money back. Or at the very least, teach an important lesson to your friend that there is still justice in our seemingly unjust society.

Disclaimer: This article aims to just inform the readers of a possible remedy for their uncollected money. This is in no way a substitute for legal advice. Some information stated above might also be fully or partially obsolete if a subsequent ruling is implemented. Please be guided accordingly.