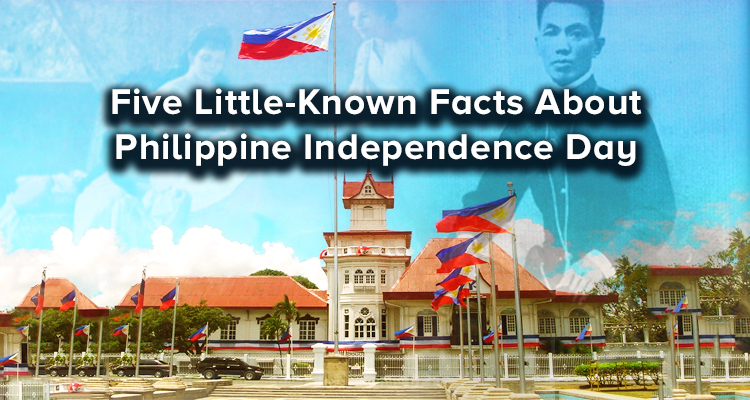 By Serena Estrella in Filipinos in Australia
June 11, 2016

Even to the most casual observer, the Philippines comes across as a melting-pot of many cultures. Its people have the distinct look and skin color of the Malay race, worship at cathedrals and churches that date all the way back to the Spanish Occupation, and read or speak Americanized English just as well as their native language. For good or for ill, centuries of being under so many colonizing powers has shaped our country into what it is today.

When I was a wee kid, I always looked forward to June 12 simply because classes would always be suspended for the day. But thanks to years of further study under a handful of brilliant (and reasonably good-looking) history professors and the sheer amount of data available on the Internet, I came across some interesting tidbits that made me appreciate the holiday a bit more, such as:

1. Strictly speaking, the Philippines should celebrate Independence Day on July 4, rather than June 12.

As though we don’t have enough in common with the US already (hello, Spam), the Fourth of July should virtually have the same significance for Filipinos and Americans alike. While June 12, 1898 does mark the day when Gen. Emilio Aguinaldo ratified the Proclamation of Independence and consequently became the first President of the Philippine Republic, neither Spain nor America recognized this declaration. Instead, Spain opted to cede over control and ownership of the Philippines to the US as part of their peace treaty with the latter, thus ending the Spanish-American War.

All things considered, we simply went from being a Spanish colony to an American one on that day in 1898. It would take revolting against two more colonizers in the form of the Americans and the Japanese before full independence would be granted to our country by the US government on July 4, 1946.

2. It was President Diosdado Macapagal who officially declared June 12 as Independence Day.

While historians recognize the significance of July 4, they take issue with the numerous strings attached to the grant of independence the US gave the Philippines on that date. (Heck, I know lots of people who think that those very “strings” still apply this day.)

Thus, a case was made for celebrating Philippine Independence Day on June 12 instead, and this was made official by then-President Macapagal through Proclamation no. 28 back in 1962. We’ve celebrated the holiday on the same day since.

Does it seem illogical? Perhaps, but I suppose there is merit in choosing the date based on when you declared your independence rather than on a day when someone else “granted” it to you, yes?

3. The road leading to Independence Day began not with soldiers, but with Filipino priests.

The word “revolution” generally brings to mind images of smoking guns and waving bolos rather than priestly cassocks and rosaries, but opposition to Spanish rule actually began among the Filipino priests who resented how the Spaniards dominated the local churches.

But since the church was the center of community life for hundreds of years, it didn’t take long for such sentiments to spread amongst the population. By the late 1800’s, the call for independence was quite rampant among the middle-class intellectuals in the country. The famed revolutionary society called the Katipunan was then formed in 1892, and membership was at an all-time high when their plans for rebellion were discovered by the Spanish government four years later.

This led to the premature outbreak of the revolution, ultimately culminating on that fateful day in 1898.

4. The National Flag and the National Anthem both made their debut on the first ever Independence Day.

If Independence Day is all about symbols, then June 12 is certainly appropriate as this is also the anniversary of two of our country’s most enduring icons: the flag and the national anthem.

It is said that Emilio Aguinaldo sketched the design for the National Flag while he was in exile in Hong Kong. Called the Three Stars and a Sun, the Philippine Flag is rife with symbolism:

Marcela Agoncillo, then living in Hong Kong, was approached by the young general to execute his design. She acquiesced, and with the help of her eldest daughter and a friend, manually stitched together the first ever Philippine flag in time for its first public unfurling in Kawit, Cavite on June 12, 1898.

The National Anthem or “Lupang Hinirang” (sometimes translated as “Beloved Country”) was actually a happy accident. Aguinaldo wanted an instrumental march to be played during the June 12 festivities, and he didn’t like the original one presented to him so he asked the composer Julian Felipe to compose another one.

Felipe’s decision to borrow elements from two national anthems proved fortuitous. More than just a mere military march, Aguinaldo declared the composition to be the national anthem of the First Philippine Republic the day before it was played before the crowd at Kawit, Cavite. And while the lyrics would be added a year later (courtesy of the poet and soldier Jose Palma), the song remained in the public consciousness as the national anthem for Independence Day celebrations to come.

5. Philippine Independence Day is celebrated in other countries where Filipino migrants form a sizeable community.

It’s been estimated that about 11 million Filipinos live and work abroad. So, it’s only natural that they carry out their own celebrations away from home.

In New York and in other parts of the northeast United States, a special parade is organized every year for the Philippine Independence Day celebrations. The same goes for Filipino expats in countries like the United Kingdom and even in Australia, where you could attend events like the Freedom Day Ball, which features men and women dressed in the traditional Filipino costumes.