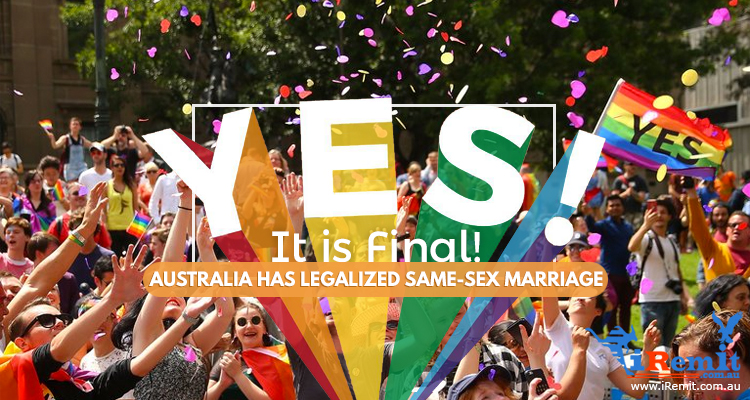 It is Final! Australia Has Legalized Same-Sex Marriage!

It is a big YES! for the Australian Community as the postal vote turned out for the legalization of same-sex marriage. This postal vote is legally non-binding but it catalyzed the passing of its legalization in parliament (which previously was not handled that seriously).

Prime Minister Malcolm Turnbull proposed the bill on November 29. On December 7, Australian Parliament finally approved the Same-Sex Marriage Bill. It only took around a week to legislate the bill, where only four voted against it. *Cue Confetti Poppers and Rainbow Flags*

The Australian Community rejoiced on this win! By December 9, the bill is in full effect. With a one-month advance notification to the government, couples can wed as early as January 9 next year.

But what exactly are the legal implications of this bill to the public? Here is a list of the things you need to know regarding the legalization of Same-Sex Marriage.

Back then, the rights of LGBT couples are limited. Because they can’t marry, registration of their relationship is bound to be “de jure” only. Their rights are similar to married couples but there is a burden of proof for couples to justify their relationship.

This led to bereaved individuals not having access to their “de jure” spouse’s superannuation. Proving your relationship with your spouse is not even a question for heterosexual couples.

Now, it has changed. Marriage is now defined as “a union between two people”, making Same-Sex Couples valid to marry. Also, other acts relating to a family such as the Family Act Law and Sex Discrimination Act will be aligned accordingly.

Laws as to incest will be amended also from a definition of “brother and sister” to “two siblings”.

Furthermore, people who change genders can now change their sex on birth certificates. Previously, this was not possible in some states because it indirectly constitutes to same-sex marriage. The states are given one year to implement this.

Lastly, Same-Sex Marriage in other countries will be recognized in Australia as of December 9, 2017. As of today, LGBT couples who married abroad are now considered married in Australia.

A few lawmakers proposed safeguard amendments to religious freedoms, but it was rejected. It was not necessary. Malcolm Turnbull expressed that religious institutions need not marry LGBT couples and rent their facilities to them.

“Religious Marriage Celebrants” can refuse to marry couples if it’s against their religious beliefs. It also applies to Australian Defence Force Chaplains.

In a span of 90 days, only existing Celebrants are allowed to register as such. Those registered after December 9 are considered “Civil Celebrants”. They are not allowed to decline to marry of same-sex couples. This is to uphold current anti-discrimination laws.

This may change in the coming months. Former immigration minister Philip Ruddock will head a study if these religious freedoms will really be protected. And the findings will be published by the end of March next year.

How About Other Services? Can They Decline their Services to LGBT Couples?

As to other services like photographers, wedding planners, restaurateurs, and etc., they are not allowed to decline based on their religious beliefs. This constitutes violations of anti-discrimination laws.

This certainly is a win for the Australians! Amendments may come with its implementation. But for what it’s worth, love can win after all. Congratulations!