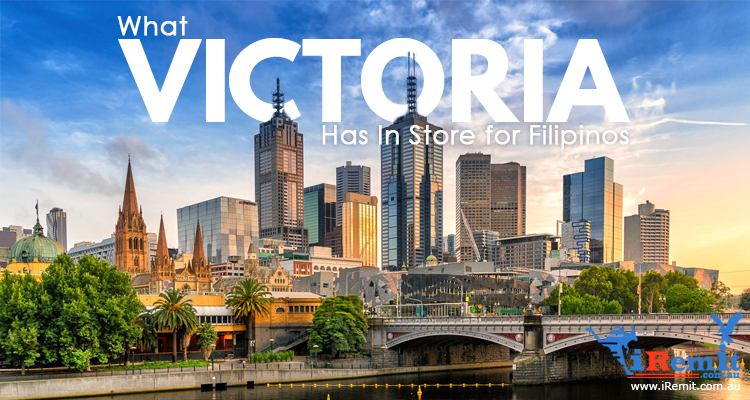 What Victoria Has In Store for Filipinos

Victoria is Australia’s second smallest state; it is Australia’s most densely populated state and its second-most populous state overall. Victoria’s capital, Melbourne is located on the shores of Port Philip Bay which is Australia’s second largest city. The city itself sits beside the Yarra River, about five kilometers from the bay. Geographically the smallest state on the Australian mainland, Victoria is bordered by the Bass Strait and Tasmania to the south, New South Wales to the north, the Tasman Sea to the east, and South Australia to the west.

Victoria is the centre of dairy farming in Australia. It is home to 60% of Australia’s 3 million dairy cattle and produces nearly two-thirds of the nation’s milk, almost 6.4 billion litres. The state also has 2.4 million beef cattle, with more than 2.2 million cattle and calves slaughtered each year. In 2003–04, Victorian commercial fishing crews and aquaculture industry produced 11,634 tonnes of seafood valued at nearly A$109 million. Blacklipped abalone is the mainstay of the catch, bringing in A$46 million, followed by southern rock lobster worth A$13.7 million. Most abalone and rock lobster is exported to Asia.

Victorian farms range from small horticultural outfits to large-scale livestock and grain productions. A quarter of farmland is used to grow consumable crops.

Victoria has a diverse range of manufacturing enterprises. Machinery and equipment manufacturing is the state’s most valuable manufacturing activity, followed by food and beverage products, petrochemicals, and chemicals. More than 15% of Victorian workers are employed directly in manufacturing, the highest percentage in Australia. The state is marginally behind New South Wales in the total value of manufacturing output.

Major industrial plants belong to the car manufacturers Ford, Toyota and Holden; Alcoa’s Portland and Point Henry aluminium smelters; oil refineries at Geelong and Altona; and a major petrochemical facility at Laverton. Victorian-based CSL is a global biotechnology company that produces vaccines and plasma products, among others.

Victoria also plays an important role in providing goods for the defence industry. Melbourne is Victoria’s (and Australia’s) most important industrial city, followed by Geelong. Energy production has aided industrial growth in the Latrobe Valley.

Mining in Victoria contributes around A$3 billion to the gross state product (~1%) but employs less than 1% of workers. The Victorian mining industry is concentrated on energy producing minerals, with brown coal, petroleum and gas accounting for nearly 90% of local production. The oil and gas industries are centred off the coast of Gippsland in the state’s east, while brown coal mining and power generation is based in the Latrobe Valley.

Brown coal is Victoria’s leading mineral, with 66 million tonnes mined each year for electricity generation in the Latrobe Valley, Gippsland. The region is home to the world’s largest known reserves of brown coal.

The service industries sector is the fastest growing component of the Victorian economy. It includes the wide range of activities generally classified as community, social and personal services; finances, insurance and property services, government services, transportation and communication, and wholesale and retail trade. Most service industries are located in Melbourne and the state’s larger regional centres.

Some major tourist destinations in Victoria are:

The metropolis of Melbourne, particular its inner city suburbs (known also for shopping tourism) and the attractions of the city centre such as Crown Casino, Melbourne Zoo, Melbourne Museum, the Melbourne Aquarium, ScienceWorks, Healesville Sanctuary, Werribee Open Range Zoo, tourism precincts such as Melbourne Docklands, Southbank and St Kilda as well as cultural and sporting tourist icons such as The Arts Centre, National Gallery of Victoria, the Melbourne Cricket Ground, also known as the MCG, and the Eureka Tower, with the highest observation deck in the Southern Hemisphere, Skydeck 88.

Victoria has more than 2000 kilometres of coastline with hundreds of beaches.

The Goldfields region featuring the historic cities of Ballarat, Beechworth, Bendigo, Castlemaine, Maldon and Daylesford.  Natural attractions, such as The Twelve Apostles, Wilsons Promontory, The Grampians, the Fairy Penguins (particularly at Phillip Island and St Kilda), the Buchan Caves and the Gippsland Lakes.

The Dandenong Ranges (in particular the Puffing Billy Railway).

Towns along the Murray River and Riverina including Echuca and Mildura including waterskiing.  Geelong and the Australian International Airshow.

The Bellarine Peninsula which features historic resort towns such as Queenscliff.

The Surf Coast which features famous beaches such as Bells Beach, Torquay and Lorne Mornington Peninsula, particularly for its wineries and secluded beaches, Arthur’s Seat and the coastal attractions of Portsea and Sorrento. Yarra Valley (in particular Healesville Sanctuary and wineries).

Great Ocean Road, which features The Twelve Apostles, historic towns of Port Fairy and Portland, cliffs and whale watching and resort towns such as Lorne.

Major events also play a big part in tourism in Victoria, particularly cultural tourism and sports tourism. Most of these events are centred around Melbourne, but others occur in regional cities, such as the V8 Supercars and Australian Motorcycle Grand Prix at Phillip Island, the Grand Annual Steeplechase at Warrnambool and the Australian International Airshow at Geelong and numerous local festivals such as the popular Port Fairy Folk Festival, Queenscliff Music Festival, Bells Beach SurfClassic and the Bright Autumn Festival.

How Filipinos came to Victoria

Filipino immigration increased significantly during the 1970s, from a population of just 467 in 1971 to 3,455 a decade later. The end of the White Australia Policy in 1973 meant the Filipino immigration was no longer restricted, and the declaration of martial law in the Philippines during the previous year caused many to seek a new life in Australia.

The increase in the Philippine-born population of Victoria between 1981 and 2011 has been one of the most dramatic of any community in Victoria: from 3,455 to 38,004 people. In this period there was a noticeable increase in the migration of Filipino spouses and fiancées under the Family Reunion Program.

The majority of these communities are based in the Western suburbs of Melbourne. Around 73% of Philippine-born people in Victoria speak Filipino or Tagalog at home, while 21% speak English. The community is mostly Catholic, and nearly half the population is aged under 40. One-quarter of working Filipinos are employed as professionals, while another quarter work in trades, production and transport.

This was formerly established in November 1991 with the initiatives of some Filipinos who had a strong commitment to social justice and human rights issues before they migrated to Australia. This community currently focus on the services provided by volunteers and staff: Community Services for Australian Filipinos and Filipino Australians but not limited to Australia. They also envisioned in promoting Filipino community’s right to equal access and participation in the resources of Australia They are located at 186 Foster Street, East Dandenong (inside Tom Houlahan Community Centre), 3175. You can also reach them at the following contact information:

The Filipino Australia Association of Ballarat

The Filipino Australian Association of Ballarat was established in 1988 by a group of Filipino and Australian families. They aim to promote friendship, preserve the Filipino culture, welcome and supports newly arrived Filipino migrants. They are actively involved in the Community of the Central Highlands Region and perform cultural activities for various welfare or not-for-profit organisations.

A Filipino Radio Program was established in Ballarat Community Radio (Voice FM 99.9 formerly 3 BBB FM.) The program extends a voluntary service to the Filipino Community by playing a variety of music, reading poems and stories, providing local and national information and news from the Philippines. The program aims to assist Filipino families living in rural areas to be informed of the support and services, social activities and maintain cultural links with other Filipinos. Broadcasts 3 programs weekly covering local/ international news & entertainment, current events, local community activities, and the best in OPM.

The Abukenos are working together as one in preserving the Filipino culture, traditions and practices which are goodwill, friendship and hospitality.

To instil cooperation and camaraderie among the Filipino senior citizens in Victoria through holding various social activities.

The mission is to serve as a forum for artistic, cultural and educational development of the Filipino community in Victoria.

To support and promote the budding, as well as the well-known Filipino artists in Melbourne.

The umbrella body of all the senior citizens of Australia.

To help and support the Filipino community.

The umbrella body of all the community organizations in Victoria.

To preserve the culture and tradition of Filipino people in Australia.

To provide welfare services to the Filipino Community in Victoria.

To provide genuine political leadership and directions on all legitimate issues affecting women in Australia and overseas to the attainment of women’s right.

To preserve the heritage of the Igorots, promote cooperation amongst the members, encourage them to contribute to the well-being of their communities and support responsible and sustainable developments for the Igorots in the Philippines.

The main objective of the association is to support the underprivileged individuals and groups in Western Visayas, 3021

A non-profit organization aims to reach out and help those less fortunate people in our country who really need some support back home in education and medical assistance.

To give consistent support to Filipino women in Victoria in terms of individual and family cultural, educational and social services.

Motivate, organize and mobilize Filipinos in Victoria in order to strengthen Filipino identity and achievements, promote the rights and welfare of Filipino migrants in Australia, and support overseas Filipinos in line with Migrante International.

PCVI. The main thrust of the organization exists to help the underprivileged communities in the Philippines through fundraising events with the support of the various Filipino organisations in Victoria.

To promote and develop sportsmanship among the Filipino-Australian communities in Victoria.

To meet the cultural, emotional, psychological needs of the Filipino elders in Victoria.

To assist and support the indigent families and individuals in the Philippines.

To teach and promote the Filipino language for better understanding of the Philippine arts, culture and traditions.

To develop sportsmanship among its Filipino-Australian members in Victoria.

To ford a strong relationship among Bikolanos and other Filipino-Australian communities in Australia.

The group is established to have a close ties with fellow Sorsoguenos in Victoria.

Support and advise women with problems in Victoria.

Filipino Shops and Restaurants in Victoria