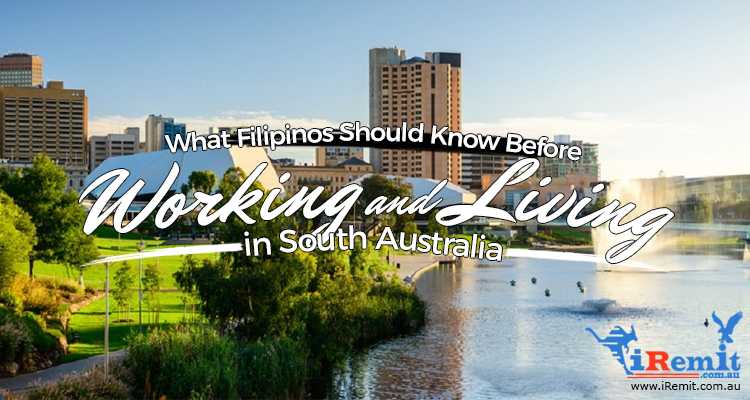 What Filipinos Should Know Before Working and Living in South Australia

South Australia is an Australian state located in the southern part, its capital city, Adelaide is considered the gateway to the region. It is the fourth largest of the country’s states and territories. It is also known as the state of festivals and of fine wine.

South Australia’s economy centers on the agriculture, manufacturing, and mining industries while the state’s employment sectors are in healthcare and social assistance. In 2009-2010, the retail trade is the second largest employer in South Australia with 12% of the state’s workforce.

South Australia attracts migrants workers because of its strong economy and world-class health and educational system. Skills shortage and the threat of aging population force its acceptance for more foreign workers. The state will keep on hiring Filipinos because of its excellent communication skills, and their similar and comparable competence with Australian professionals.

The Philippines currently represents South Australia’s 6th largest source market for migrants workers many of whom helping to ease the demand for trade skills mostly in the field of the mining industry, manufacturing and health sectors such as nurses and doctors. There are about 5,000 Filipinos living in South Australia with many of them working as engineers, nurses, information technology experts and other professions.

More migrant Filipinos enter the country due to its open policy on skilled workers and migration, opening the doors for our fellow countrymen an opportunity to build their future living in the “Down Under.” As the population of the migrant Filipinos increases, different communities established to cater the needs, and the security and welfare of Filipinos in South Australia.

They also aim to learn and teach Filipino customs, preserved the Filipino heritage and its custom even if they are living in Australia. The organization offers cultural, educational and professional outreach programs in order to retain, increase membership and raise awareness of the association in the community. It also collaborates with other Filipino community organizations to be able to raise funds to provide academic scholarship.

There is also a promotion of cultural diversity through links and cooperation with the other organizations, group, and communities. If you need their assistance, visit their website here for more details.

Aside from the Filipino Communities that look after the welfare of its fellow Filipinos who are in living in South Australia, there are also business establishments owned by Filipinos who had successfully established their own name in the region but still has that Filipino way in them.

Filipino Bakehaus and Asian Grocery, sells Filipino products that are very familiar to the homeland.

Their products include the famous breakfast bread, the pan de sal and sugar-drenched ensaymada buns. They also sell tocino, longganisa, carp and milkfish (bangus). The store is located at  98 Commercial Road, Port Adelaide with telephone number +61 8 8241 1311.

Bamboo House, this restaurant serves delicious choices of Filipino and other Asian dishes.

Image Credit: She Gathers No Moss

They also cater and serve in house parties, and bigger functions like birthdays, weddings, company gatherings, and anniversaries. They can definitely satisfy your craving for a dose of Filipino taste.  It is located in Shop 26 A, Ingle Farm Shopping Centre, Ingle Farm, South Australia, 5098. Neighborhood: Holden Hill with contact number +61 8 8396 5761.

Tita Kays, this restaurant is famous for serving the best selling and infamous Filipino dishes such as Crispy pata, Kare-kare, Mechado, and their own Tita Kay’s BBQ range and Tita Kay’s Puto Pao.

Their standard of quality is to deliver high-quality food that aims to bring tastes and services that Filipinos. A taste of their specialties will surely make anyone who misses the Philippines feel at home. Tita Kays also accept catering services, deliveries, takeaway and dine-in services. The restaurant is located at Shop 2, 493 North East Rd., Hillcrest, Adelaide, South Australia 5086. Contact number: +61 88266 0623 and email address: tita.kays@gmail.com.

Australia will keep on hiring Filipinos as it faces skills shortage and the booming economy.  So, Filipinos living in different parts of Australia expect to see more of your countrymen as the hiring continues.

Cost of Living of OFW’s in South Australia

Living in South Australia is very affordable, it offers a  significantly cheaper living than its interstate peers. South Australia is a global supplier of minerals, wines, cars, cereals, seafood, and meat. It is, in fact, the world’s sixth largest wine producers, it is known as the State of Festivals and Wine.

South Australia and its Capital City of Adelaide are increasingly being chosen as the ideal location to live, work and do business. Adelaide is one of the least expensive developed cities in the world. The city is also considerably cheaper than other major Australian cities.

South Australia’s key industries centered on advanced manufacturing, aerospace and aviation, automotive production, bioscience, agribusiness, and defense technology as the major industries. Other industries in South Australia includes health, Information and computer technology (ICT), electronics, minerals and energy, tourism and water management.  The building industry is another area that continues to experience great demand. Because of the booming industries in manufacturing and mining, Adelaide launched a campaign to attract migrants in search of skilled workers. Expats from different countries including the Philippines had enjoyed this great opportunity to be working down under.

Filipinos here in South Australia usually holds the 457 Visa. The 457 Visa is a scheme programmed by the Australian government for the continued growth of Australia to attract skilled workers for work in Australia. Filipinos and other foreigners holding a 457 Visa are earning base salaries that are $10,708 or 15% higher than the Australian average citizen for full-time employee. According to the Australian Bureau of Statistics, in Tasmania and South Australia where the number of 457 Visa holders including Filipinos is growing fast, the recent salaries they get are 33% and 47% respectively above the state average. The largest industry pay differentials in favour of 457 holders occur in the arts and recreation services (36% above average), retail trade (32% above average), construction (23% above average), and manufacturing (22% above average).

South Australia has higher income and provides a lower cost of living compared to other states in the country. This is typified by the low cost of capital. Adelaide, which has the lowest average of house price compare to all cities in Australia. With the low cost of houses and lower cost of living with higher income means you can spend on leisure activities within the region or spend more on food. South Australia has a really affordable lifestyle.

This is based on the cost of living in Adelaide, the capital city of South Australia. Based on the monthly median salary of $4,000.00.

Grocery cost items such as consumables, cleaning products, dairy, fresh fruits and vegetables, general food products, snacks, soft drinks are very high in comparison to other places in the region.

Alcohol and Tobacco cost for items such as beer, spirits, wine and tobacco related products such as cigarettes are very high in comparison to other places in the region.

House accommodation costs for items such as apartment purchase, mortgage rate, rental fee and utilities are very high in comparison to other places in the region.

Transportation cost items such as fuel, public transport, vehicle purchases and maintenance are very high in comparison to other places in the region.

Eating out in Adelaide is cheaper than in other cities with no much world-class wine and the fresh produce emerging from the nearby Adelaide Hills and Fleurieu Peninsula.

Filipinos who are currently living in the region with the 457 Visa has an average wage of as much as 36% above average of the  earning base salaries have a better chance of survival, can afford the lifestyle living in Adelaide and can send more money to the Philippines for their loved ones if they know how to budget their earnings well.