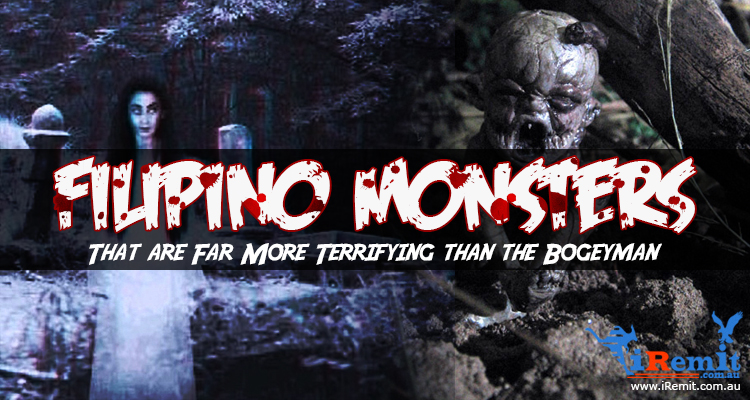 Filipino Monsters That Are Far More Terrifying Than the Bogeyman

With the upcoming holidays, Filipinos visit their province in commemoration of their departed loved ones during Halloween up to All Souls Day.

You pack your bags, ready to embark on your journey. But then, are you safe with the looming dangers from the monsters of Filipino folklore?

Step-aside Boogeyman! These are the Filipino Mythical Creatures and why you should watch out for them!

The Aswang are shapeshifters that eat humans. They appear as normal human beings in the day while transforming to horrifying creatures at night. They can also change into animal form.

The most known ones are the Manananggal. These woman shapeshifters detach their upper body from their torso and fly thru the night to devour unsuspecting prey. Generally, they delight on succumbing human liver. But what they salivate for the most are children in their Mother’s womb.

It is believed that one should find the other half of the Manananggal and sprinkle it with salt or crushed garlic to kill the beast. The Manananggal dies with sun exposure when they are in their demonic form.

These are witches and sorcerers that curse people to inflict illness. The Mangkukulam are adept in the dark arts and use voodoo techniques to hex their victims.

The Mambabarang are another type of sorcerer who uses dark magic to control insects. After incantations, these insects infest the body of their victims and kill them.

They also mask as normal people. Give respect to everyone you encounter. You never know who they really are.

The Towering Kapre and Tikbalang

These are creatures dwelling in the forest. The Kapre is a forest giant dwelling above acacia, balete, or mango trees. This giant demon loves to smoke a cigar, which is believed to attract humans. This smoker just loves to scare children playing late at night. He also loves to indulge in human vices such as drinking and smoking.

On the other hand, a Tikbalang resembles half a horse and half a human. These malevolent creatures rape women to give birth to more tikbalang. But when they are not driven by sexual desires, the Tikbalang are generally “playful” to human beings. They enjoy inducing hallucinations to people to drive them mad. Sometimes, they deliberately make travelers go around circles.

When found to be “played with” by a Tikbalang, it is customary to remove your clothes and wear it inside out to break the enchantment.

Now we go to the miniscule but dangerous creatures. The Nuno sa Punso are goblins living in the mounds. When you see a structure like this, you should proceed with caution. The Nuno can give misfortune to those that cross its territory.

Furthermore, the Tiyanak are babies who died before being baptized. They then return as vengeful creatures to eat humans and to take revenge against their inhumane parents. They lure their victims by transforming into normal babies. Then, attacking the unsuspecting person, eating them alive.

The Batibat are demons residing in trees that are blamed for death during sleep. They take a form an old fat woman. They travel to their victims when part of their tree is used for the people’s houses.

The Batibat do not like people sleeping near its tree. When violated, the demon sits on the victim’s chest until he dies of suffocation.

To combat a Batibat, you have to bite the thumb or hardly press the toe of the victim. Then, the victim would break from the Batibat’s induced nightmare.

This list shows some of the mythical creatures of Filipino folklore. You may believe it or not. But don’t say we didn’t warn you! (*continues chopping garlic*)