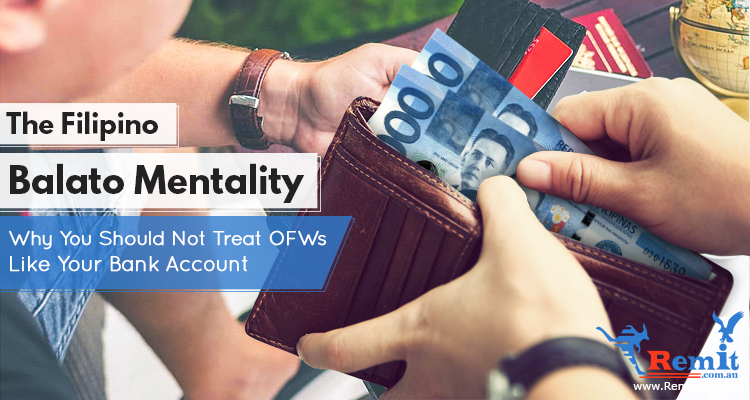 You are not a Filipino if you don’t have any relatives working abroad. The economic state in our country forced most of our Kababayans to seek greener pastures elsewhere. And having this, OFWs are often mistaken as walking bank accounts.

Is this Thinking Familiar?

Scenario: Conceited relative musing with his/her thoughts upon the arrival of OFW relative.

Aren’t they so lucky to nab that great opportunity abroad? The money is overflowing in Australia, the Middle East, or the United States to name a few. They had it so easy, right?

When they arrive, you are surely entitled to the specific pasalubongs you instructed. Wait. What? Why is this the wrong brand? I deserve better.

Let’s keep our composure for our dinner get together. I mean, a feast is just mandatory. Bring your family of 15 and let’s eat out every day with our OFW relative. Wait we can even invite the whole block. I mean, the more the merrier! Who will pay for it? Of course, our man/woman of the hour.

Ohh! I forgot my children’s tuition and some pocket money for our daily needs. Chaching! Who else but our modern day hero to save the day.

Is this scenario familiar? Is this even fair? If you are like this, better check the mirror and slap your opportunistic self. You are plagued by the Filipino Balato Mentality.

In a recent viral post on Reddit, the son of an OFW decided to spend his vacation with his relatives from his mother’s side for three weeks. He always stays with his dad’s side and for this time, he wants to know the other side of the family as well.

In just the first few days, 11,000 PHP was already siphoned by his relatives with their demands. They even asked him to pay for their electric bill and their children’s tuition fee.

And the thoughtful bunch even invited him for a family dinner for 12 for which he has to pay. The $1,000 flew by so fast he has to additionally use his own money to satisfy their “requests”.

If you are in his place, will you come back after this? Hell, no.

And this is rooted in our Balato Mentality. “Balato” means asking for a portion of the winnings from a lucky winner. It’s a Filipino Cultural thing and it extends to our “Lucky” OFWs.

When our relatives work abroad, most think that they found the pot of gold over the rainbow. There is this feeling of entitlement that engulfs them to milk you of their supposed share.

If you have this tendency, understand that money doesn’t come easily for our OFWs. They have to work their blood out just to save money from their salary.

Yes, it may be a large sum when converted. But, with the higher cost of living abroad, they are practically penny-pinching their way just to give you a better life in the Philippines. When you ask, of course, they won’t hesitate to give you some money.

But don’t abuse their generosity. Some OFWs even put themselves in debt just to give you what you want.

And I cringe to those manipulative individuals who even concoct melodramatic stories just to get money. And when you don’t succumb to their pressure or if they are not satisfied with the help you’ve given, they even have the nerve to vent out in social media.

As if you owe them something in this world. I want to raise one finger for you. And it’s not my thumb. End rant.

How to Avoid This?

For our OFWs, sometimes you can’t really change everyone. It’s hard to demand them to change when we have problems changing ourselves. So, we might just put safeguards against this.

Don’t get me wrong, it’s ok to help your family members who are in need. But don’t do it at the expense of you and your family’s future. Only lend or give out money you can afford. If you can’t afford to lose your hard earned moolah, then don’t give them out at all.

If they are really your relatives or friends, saying no should not be an issue (unless they are rotten avaricious leeches who want to suck you dry). It’s a request anyway.

You have the ability to say no. You are not a walking bank account.